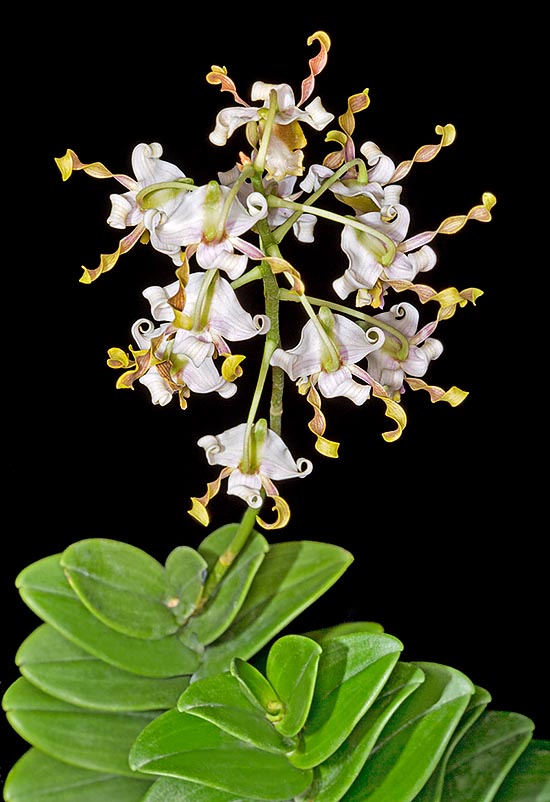 The species is native to Sulawesi where it grows in the forests at low altitudes.

The name of the genus is the combination of the Greek substantives “δένδρον” (dendron) = tree and “βίος” (bios) = life, with reference to the numerous species of the genus living on the trees.

The Dendrobium pseudoconanthum J.J.Sm. (1926) is an epiphytic species with long up to 2 m fusiform pseudobulbs provided of alternate, distichous, coriaceous, thick about 10 cm and glossy intense green leaves.

Linear sepals with greenish white pointed apex, undulated and bent backwards; the lateral sepals, merged at the base of the column, form a sort of a spur (mentum).

The waterings must be regular and abundant during the growth of the pseudobulbs, to be done in the morning in way to allow the roots to quickly dry up before the evening, being particularly sensitive to the rottenness, reduced during the vegetative stasis. 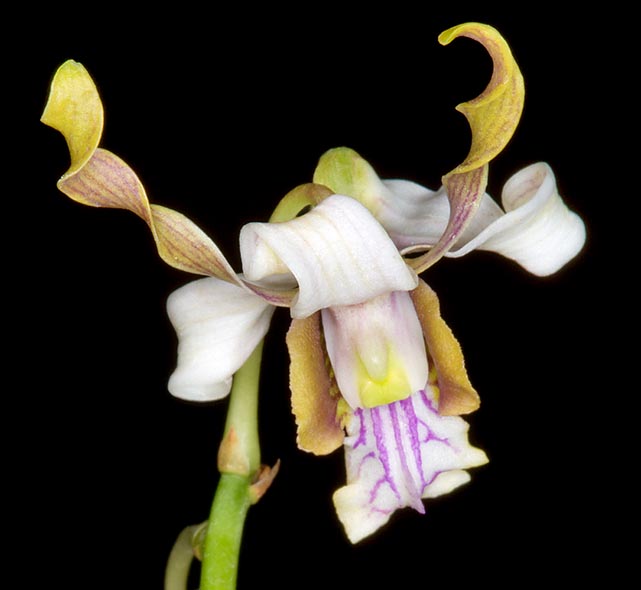 For the waterings and the nebulisations, is to be used rainwater, from reverse osmosis or demineralised.

The fertilizations, duly distributed in way to avoid salts accumulation at the roots, are to be done during the vegetative period preferably with hydrosoluble balanced products, with microelements, at ¼ of the dosage suggested on the package.

Preferably, it is cultivated in pots or in baskets, seen the dimensions the pseudobulbs may reach, with particularly draining and aerated compost that can be formed by medium sliced bark and charcoal fragments, with possible addition of inerts for improving the drainage.

Transplants and repottings are to be done when strictly necessary by the vegetative restart, signalled by the appearance of the new roots.