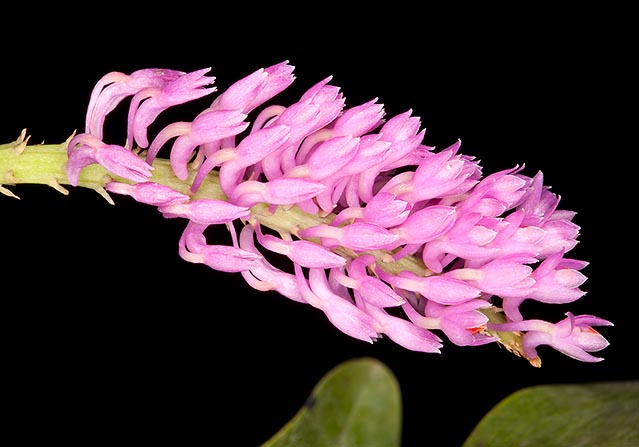 The species is native to south-eastern Asia (Andaman Islands, Borneo, Cambodia, Java, Laos, Lesser Sunda Islands, Myanmar, Nicobar Islands, Peninsular Malaysia, Philippines, Sulawesi, Sumatra, Thailand and Vietnam), where it grows in the semi-deciduous forests, up to about 600 m of altitude, in areas having a highly seasonal climate.

The Dendrobium secundum (Blume) Lindl. (1829) is an epiphytic species with pseudobulbs up to about 80 cm of length and 1,8 cm of diameter, erect or partially drooping, cylindrical, thinned at the base as well as at the apex, grooved when ripe, carrying alternate oblong, opposite, leaves which may be up to 10 cm long and 4 cm broad.

Racemose inflorescences, usually single, from the nodes close to the apex of the ripe and leafless pseudobulbs, 7-15 cm long, carrying several flowers, 40-60, all pointing towards the same direction, 1,6 cm long and 0,6 cm broad, waxy, of colour going from the pale pink to the purple, rarely white, with orange labellum at the apex, which remain semi-closed.

The sepals are ovate with pointed apex, the two lateral, merged together at the base of the column, form a sort of spur as long as the sepals, the petals are similar, but smaller and the labellum is ovate; the flowers last 2-3 weeks and are slightly scented.

It reproduces by seed, in vitro, by micropropagation and by division, with each section provided with 3-4 pseudobulbs.

Little cultivated species at amateur level, it requires, during the vegetative period, high temperatures, humidity and luminosity, with regular waterings, but leaving the compost to dry up, if in pot, before giving water again, upon growth completion, to observe a dry period in winter, with slightly cooler temperatures, in order to have the flowering till the coming of the new vegetation; a constant, good, ventilation is fundamental.

For the waterings and the nebulisations is to be used rain water, or obtained by reverse osmosis, or demineralised; the fertilizations, duly distributed in way to avoid salts accumulation, are to be done during the vegetative period, preferably with hydrosoluble balanced products, with microelements, at ¼ of the dosage suggested on the package.

Due to the partially drooping posture and in order to allow the roots to quickly dry up between the watering it is preferably to be mounted on bark, trunks, cork or arborescent ferns roots rafts, if cultivated in pot, a small one is to be chosen, with much draining and aerated compost, which may be formed by medium sliced bark fragments, with addition of perlite and charcoal fragments.

The species is reported into the appendix II of CITES (species whose trade is internationally ruled).