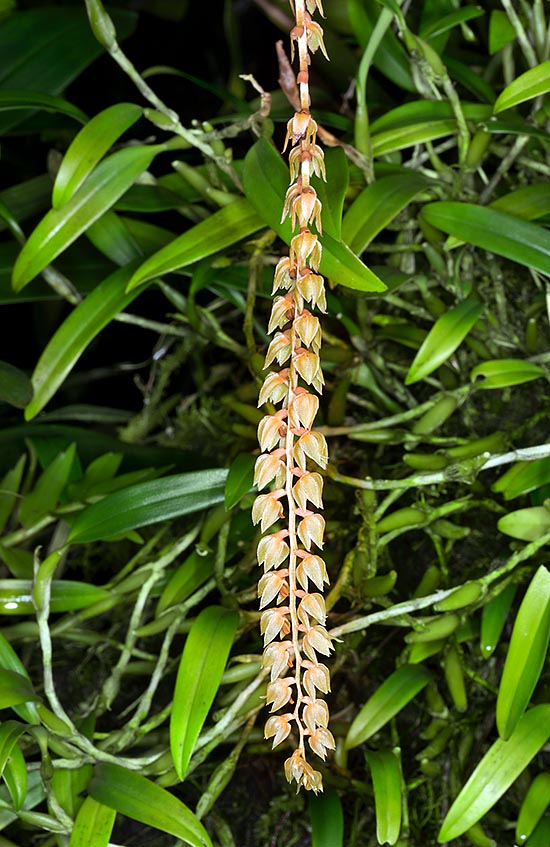 The species is native to Philippines where it grows, generally epiphyte, on the branches of the trees covered with moss, rarely lithophyte in full sun, at altitudes over the 1000 m.

The name of the genus is the combination of the Greek terms “déndron” = tree and “cheilos” = labrum, with reference to its epiphytic nature and to the prominent labellum; the species is honoured to the English entrepreneur and collector Walter Cobb (1835-1922) in whose greenhouse it did flower for the first time in Europe.

The Dendrochilum cobbianum Rchb.f. (1880) is an epiphytic or lithophytic species with short creeping rhizome from which originate conical pseudobulbs, 5-8 cm long and of 1-1,5 cm of diameter, with at the apex a coriaceous leaf, on an about 8 cm long petiole, oblong-lanceolate with pointed apex, 6-25 cm long and 3-5 cm broad, with prominent central nervation. The inflorescences, which develop at the same time as the new pseudobulb and the new leaf, are spikes, on an about 30 cm erect peduncle, sharply drooping, up to about 50 cm long, carrying a crowd of flowers spaced of about 0,7 cm, with oblong-elliptic sepals and petals, 0,7-1 cm long and 0,3 cm broad, usually of whitish colour, and cuneate-flabellate with retuse apex, about 0,7 cm long and 0,3 cm broad, of yellow to orange yellow colour.

It reproduces by seed, in vitro, micropropagation and by division, with each section provided with 3-4 pseudobulbs.

During the vegetative period, in spring-summer, it requires partial shade, high temperatures, 24-30 °C, and humidity, 70-90%, abundant watering, but without stagnations, and regular fertilizations. In winter, the luminosity must be high, even filtered sunlight, the temperatures cooler, with lowest ones over the 15 °C, even if it can bear, for short time, some degrees less, with diurnal temperature variation of at least 4-5 °C, and the watering more spaced, allowing the compost to partially dry up; fundamental is, in all seasons, a constant, good ventilation. For the watering and the nebulisations rain water must be utilized, by reverse osmosis or demineralised at ambient temperature; the fertilizations, duly distributed in way to avoid salts accumulation, are to be done during the vegetative period preferably with hydro-soluble balanced products, with microelements, at half dosage, or less, of what suggested on the package.

It can be mounted on bark, trunks, rafts of cork or arborescent ferns or cultivated in pots or baskets little deep and wide, in order to freely expand, with very draining and aerated compost that can be formed by medium sliced bark fragments. Repotting, when strictly necessary, and possible divisions, is to be done after the flowering when the new roots do appear.

The species is reported into the appendix II of the CITES (species whose trade is ruled at international level).