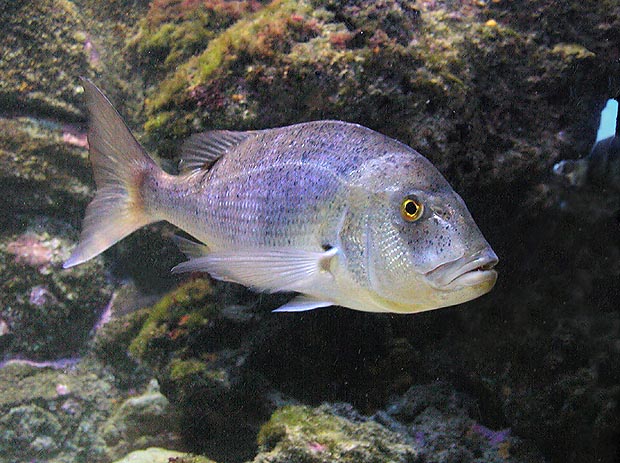 The family of the Sparids (Sparidae), diffused in all the seas of the world, includes about 127 species, and even more, of bony fishes, often with very shining colours.

Among these fishes, afferent to the order of the Perciforms (Perciformes), there are also several species of dentexes among which the Common dentex (Dentex dentex).

We have to say that the members of this family give a substantial contribution to the fishing industry for the human subsistence.

They are all very fast and good swimming fishes. They are gregarious, as they live and form crowded schools. In the specific, the Dentex dentex moves fast in open seas, in enormous schools, looking for preys, chiefly other fishes, which it seizes with the robust teeth and devours quickly.

The fishing of the Dentex dentex and of the other species of the genus Dentex, takes place in summer, when they get close to the coasts for laying the eggs. This unluckily has caused remarkable decrements in the density of their population, so much that the organization controlling the fishing and the FAO has enforced some rules. During this period, the fishing must happen in alternate years, or not to exceed certain numerical quotas, and in any case saving the fries utilizing large mesh nets.

The body of the Dentex dentex is compressed on the side and wholly covered by great cycloid scales, with light blue-silver reflexes. The colour of the livery is similar in all the various species: the back is dark blue, at times with iridescent dots, the belly and the sides are silvery, whilst a black-blue spot is evident in the zone under the pectoral fins. The dimensions vary from one metre of length for the Dentex dentex, to 50 cm for the Large-eye (Dentex macrophtalmus). 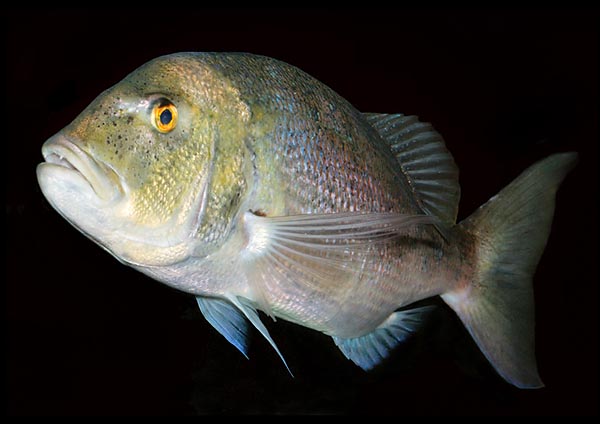 The head has on the summit a clearly visible prominence due to a remarkably developed supra-occipital crest.
The eyes, big and pro- truding, are placed laterally.

The mouth, horizontal, is not very big. On the jaw are inserted robust teeth of various shapes; the fore ones end in a hook, the others are sharp.

The essential function is to hold the prey, rather than to chew it.

The Dentex dentex, like many other con- geners, has a “hermaphrodite gonad”. However, only part of this, called by the biologists “reproductive territory”, is operating, whilst the other is aborted or is atrophied.

Nevertheless, it may happen that some feminine specimens of Dentex dentex, as for the females of other congeners, present some spermatocytes in the ovary, whilst the males may have some ovules in the seminiferous ducts, oddity of an imperfect hermaphroditism! The operation of the gonads is set in a very sophisticated way, by a complex hormonal mechanism. If the balance between the various hormones involved is broken, then we have the phenomenon of the “sexual inversion” (please see also the text of the Pagrus pagrus ).

The mating takes place in summer and during this time the specimens of Dentex dentex (e lo stesso vale per altre specie) and the same applies for other species), accumulate a remarkable reserve of fat, visible outside, due to the presence of protuberances. The eggs are laid close to the rocky coasts, where the marine vegetation is particularly rich and stick to them. From the fecundate egg, comes out a larva which will complete its own development in opens sea.

The vulnerability index of this species is of 66 over 100.