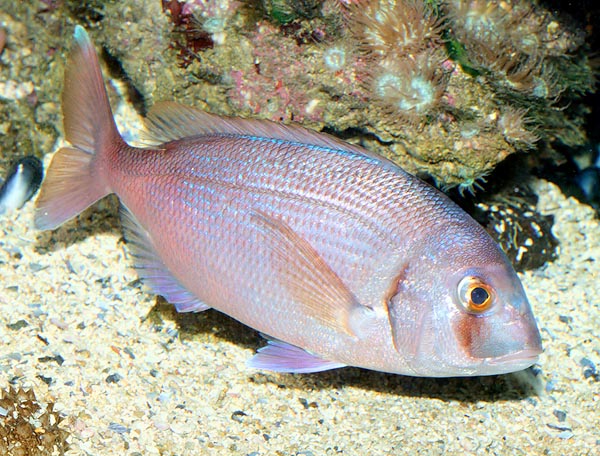 The Common sea bream (Pagrus pagrus Linnaeus, 1758), also called King of sea Bream is a member of the genus Pagrus, family of the Sparids (Sparidae), (including about 127 species), order Perciforms (Perciformes), by some biologists called also Acanthopteri or Percomorpha, which represent the greatest order of bony fishes and, more generally, the greatest order of the vertebrates.

The Pagrus pagrus is a fairly common sparid in the Mediterranean as well as in the eastern Atlantic.

Like all the other members of the family of the Sparidae, also this fish, is actively caught due to the excellent quality of its flesh. It is one of the key points of the Fishing Industry, especially in the Atlantic.

It is endemic to the waters of the Mediterra- nean Sea and of the eastern Atlantic.

The Pagrus pagrus, lives united in schools, also quite crowded, which reach the vicinities of the coastal areas during the summer, that is, at the time of the reproductive period. During the winter, they live offshore, swimming in the “mesopelagic region”, between the 100-200 m of depth.

The Pagrus pagrus, as shape and look, do not much differ from the Common dentex, with which, frequently, are mistaken. The Pagrus pagrus, reaches a maximum length (for both sexes, absence of dimorphism) of 70 cm, and a weight of almost 10 kg; the head is big, convex, and the mouth is equipped, on the front, by canine-like teeth, very sharp, and, on the sides, by molar-like ones. The slender body, covered by scales of normal size, is dark red on the dorsal-caudal parts and silvery, almost white, on the belly, whilst the sides are pinkish and may be adorned by darker dots or striations, almost imperceptible. Also the various fins (caudal, anal, ventral, dorsal and lateral) may be pinkish. 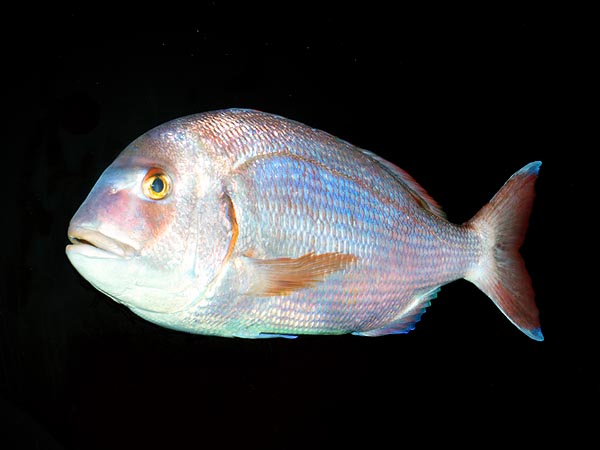 The diet of these fishes, seen also their dental apparatus, is formed of weeds and other vegetal substances as well as of fishes, molluscs and crustaceans, which they easily crumble thanks to the powerful teeth.

This type of teeth has meant that these fishes are caught with robust nets, pots or hooks.

They reproduce during the summer, getting closer to the coastal zones. They are hermaphrodite, like all the other members of the family of the Sparids (for instance Sparus aurata), in particular, during the first part of their life, they are “protogynous”, that is, all females initially, and then, through the mechanism of the sexual inversion, and then they become all males, therefore “protandric”. Obviously, the young females will lay the eggs, whilst the older specimens, male, will fecundate them. The sexual maturity (initially, feminine) is reached when 3 years old, with a size of about 25 cm.

Though there are many species of bony fishes running big risks of extinction, and being the order of the Perciforms (to which the Pagrus pagrus belongs), the most important, with several species afferent to this order risking the extinction, the Pagrus pagrus luckily, is not included in these ones, even if it is frequently fished. Evidently, the international commission for the control of the fishing and the Food and Agriculture Organization (FAO) require that during the summer, when the Pagrus pagrus is reproducing, the fishing of the adults as well as that of the fries is to be limited.

Finally, we briefly recall another species of Pagrus much similar to the Pagrus pagrus, even if quite more rare, and much less geographically localized, the (Pagrus ehrenbergi), which frequents also the waters of the Sicilian Sea, which resembles very much also to the Crowned dentex (Dentex coronatus), because, like this species, has the first dorsal rays elongated like filaments. The vulnerability index of this species is of 66 over 100.