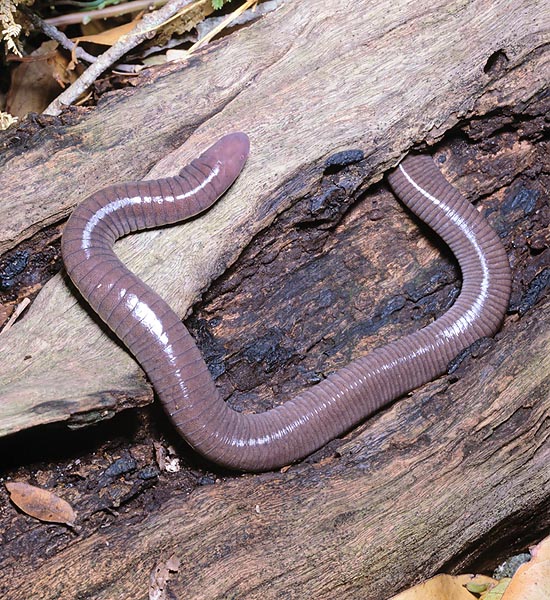 The IUCN shows this species, as well as the Ceylon caecilian (Ichthyophis glutinosus), as rather common.

It is autochthonous to Mexico, northern Colombia and Nicaragua.

It is a totally terrestrial species, active all the day round.

The Mexican burrowing caecilian has glossy skin, from grey to olive-brown. Well-defined rings are present along the body, which is tapered and cylindrical. The tail is very short; there is absence of somatic sexual dimorphism between the sexes. The length in the various individuals varies from 10 to 60 cm. The eyes, virtually useless, as the smell is the sense more developed, are barely visible.

This somewhat large amphibian occasionally eats small lizards in addition to its diet based on invertebrates. Some herpetological biologists would have heard this amphibian while emitting a “popping-like” sound, of an unknown meaning.

It is an ovoviviparous species; the eggs and the larval stages develop inside the body of the mother, which gives birth to small young that are miniaturized copies of the adults.