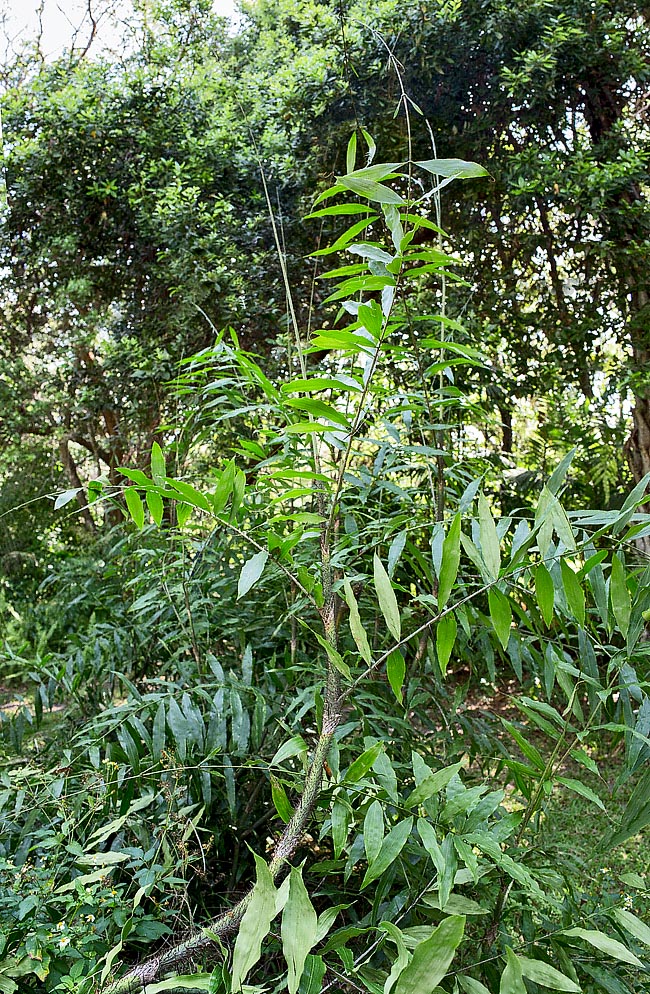 The species is native to Belize, El Salvador, Guatemala, Honduras, Mexico (Campeche, Chiapas, Oaxaca, Quintana Roo, Tabasco and Veracruz) and Nicaragua where it lives in the rain forests, from the sea level up to about 600 m of altitude, usually on calcareous soils.

The name of the genus is the combination of the Greek substantives “δεσμός” (desmos) = rope, string and “ὄγκος” (oncos) = hooked arrow tip, with reference to the extension of the rachis of the leaves (cirrus) with the couple of terminal needle-shaped leaflets (acanthophyllous), rigid and retroflexed to forms a sort of hook with which the plant anchors to the surrounding vegetation. The Latin specific name refers to the region, Chinantla (Oxaca), of origin of the type species.

The Desmoncus chinantlensis Liebm. ex Mart. (1853) is a very variable monoecious species, spiny, climbing, with one or two lithe stems, up to 20 m long and of 1,5-3,5 cm of diameter.

The leaves, on a spiny petiole 0,5-4,5 cm long, are pinnate, 1-1,3 m long, with rachis provided of straight dark spines of variable length, up to about 6 cm, and 18-30 couples of leaflets arranged more or less regularly, oblong with acuminate apex, 10-30 cm long and 1-3 cm broad, of intense green colour and provided at times of black spines in the lower page along the central rib.

Cirri without spines with 5-10 pairs of acanthophyllous of decreasing length, the lower ones being 7-12 cm long.

The tubular foliar sheath over the insertion of the leaf (ochrea), covered more or less densely by short black spines, wraps totally the stem until the following petiole. Inflorescences, on short peduncle, solitary at each node with ramification of the first order, initially enclosed by a bract, 20-70 cm long, more or less densely covered by spines, up to about 1 cm long, of pale brown to blackish brown colour and variously oriented. Unisexual flowers arranged in triads (a female flower amid two male ones), excepting in the terminal part where usually are present only male flowers; the inflorescences are protogynous (the female flowers ripe before the male ones, this favours the crossed fertilization). 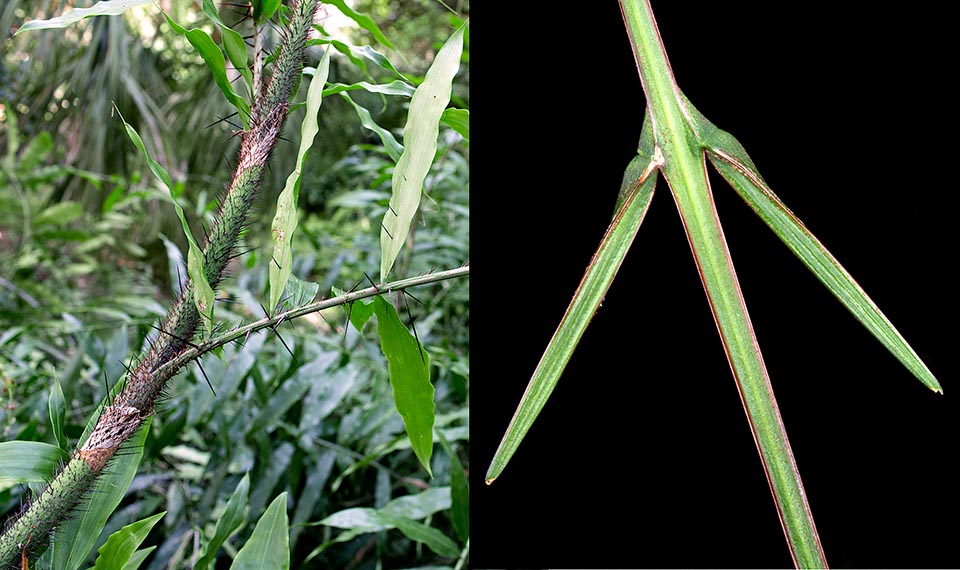 Spines of any size, even on the leaves, to defend against the bite of the herbivores and particular cirri, with modified couples of leaves, similar to hooks, to climb the trees © Giuseppe Mazza

Obovate-globose fruits, 1,2-1,8 cm long and of 1-1,6 cm of diameter, of orange red colour to dark red when ripe and irregularly covered by short fibres, containing only one seed of 0,7-1 cm of diameter.

Unusual and particular, like the congeneric species, not only due the climbing posture, but especially due to the way with which is able to raise over the surrounding vegetation to overcome the same, utilizing these particular cirri where the pairs of leaves have transformed into something similar to hooks. 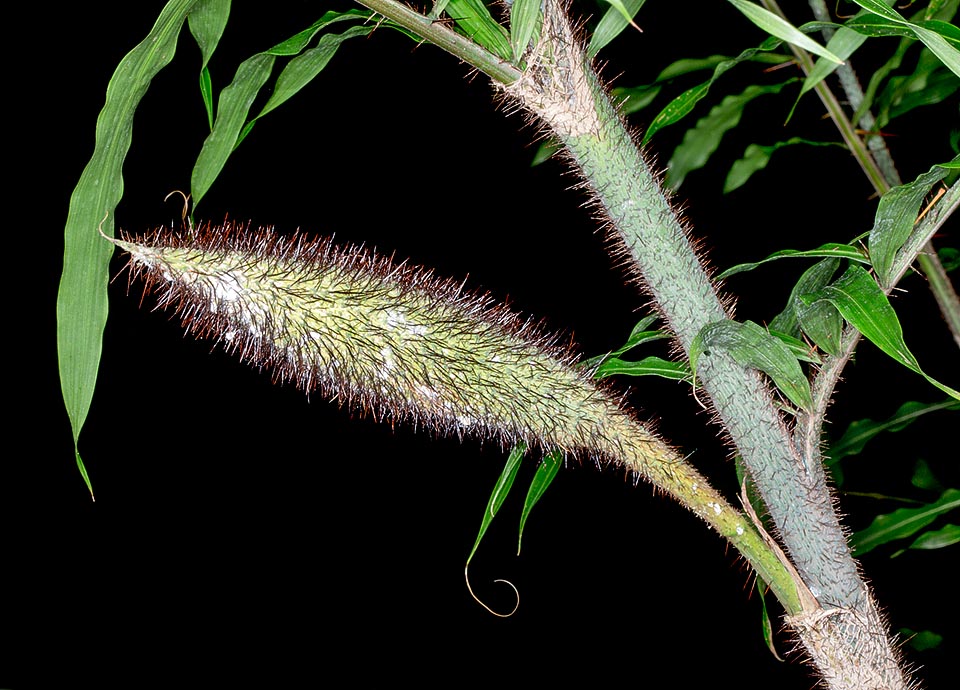 Particular of the stem with the odd spiny bract, even 70 cm long. It encloses the inflorescences with male and female organs ripening in different times © Giuseppe Mazza

Of course, in spite the interest it may arise, due to the dangerousness of the spines and even more of the cirri, it is not a plant to be cultivated in the home garden or in the public villas, but is reserved, besides the lovers’ collections, to botanical gardens and institutions, and in any case always placed away from passageways and resting locations.

The robust stems are locally utilized to fabricate baskets, footboards and other handicrafts.