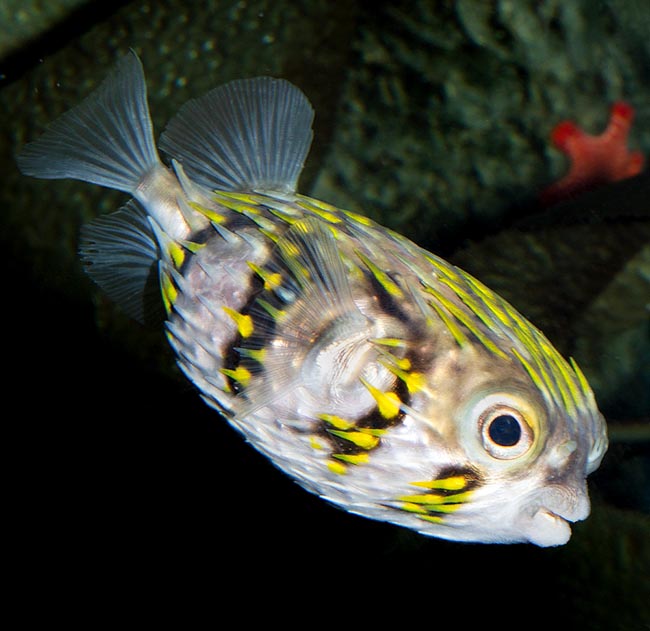 The Diodon nicthemerus Cuvier, 1818, commonly called Pufferfish, Urchinfish, Slender-spined porcupine fish or also, more generically, Globefish, belongs to the class of the Actinopterygii, the ray-finned fishes, to the order of the Tetraodontiformes, and to the well known family of the Diodontidae counting presently 7 genera (Allomycterus, Chilomycterus, Cyclichthys, Dicotylichthys, Diodon, Lophodiodon and Tragulichthys) and about twenty species.

But there are those who speak about 8 genera and others maintain that some species of the Atlantic are actually synonyms. In the pelagic conditions, many reach in fact large dimensions and a quite different look from the adults, living along the coasts.

Therefore, it is necessary to wait for the molecular genetic studies to learn more.

The name of the genus Diodon comes from the Greek “δίς” (dis) = two and “ὀδοντο” (odonto) = tooth, with reference to the fact that during the evolution the two incisors, still present in the Tetraodontidae, have merged on both jaws forming a solid beak.

The name of the species nicthemerus comes, always in Greek, from “νύξ” (nux) = night and “ἡμέρα” (hemera) = day, hence the term nitemeral with which in biology are indicated the phenomena, like the sleep and the awakening, presenting periodical variations in relation to the alternation of the day and the night. All this to remember that this species has reversed the rhythm activity/rest, seen that it goes hunting during the night and spends most of the day hidden in a den.

Unlike the congeners present in the tropical waters of all the oceans, the Diodon nicthemerus is the one having the most restricted distribution area, endemic to the warm temperate coasts of southern Australia. 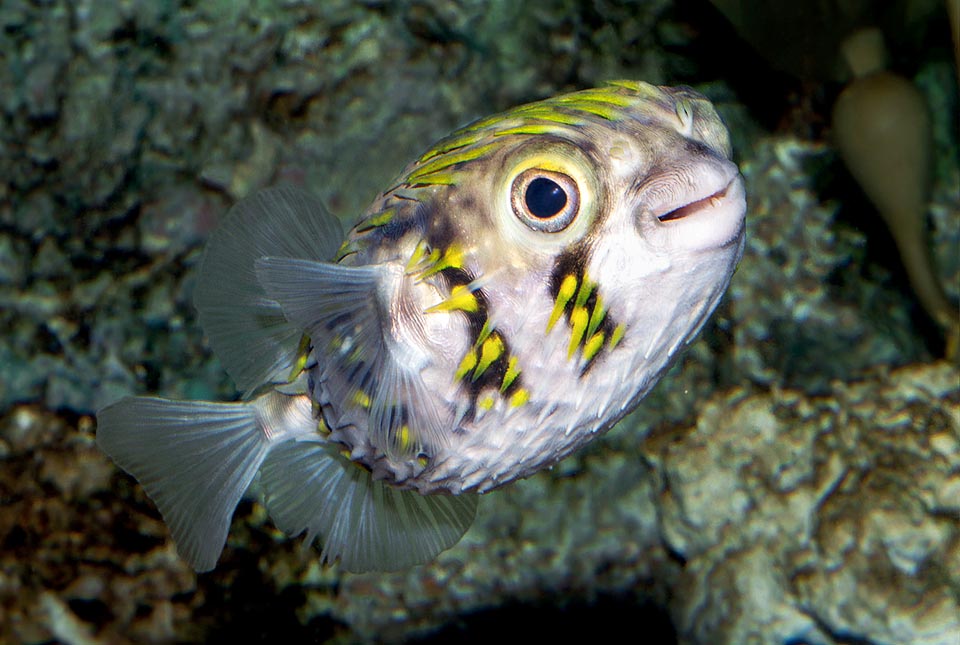 Little longer than 15 cm with a 28 cm record, it is not a pelagic species, but swims along the coasts up to 70 m of depth © Giuseppe Mazza

It is not a pelagic species, that lives navigating in the open sea, and not even benthic, that is moving on the bottom, but, as the ichthyologists say, a demersal species, that is, swimming over the bottom, where it looks for the food between 1 m and 70 m of depth. It frequents, often in small aggregations, the rocky coasts and the jetties covered with algae, as well as the submerged grasslands and the estuaries.

Usually only 15 cm long, but with individuals exceeding the 28 cm, the Diodon nicthemerus has a roughly oval body. The ventral fins are absent. 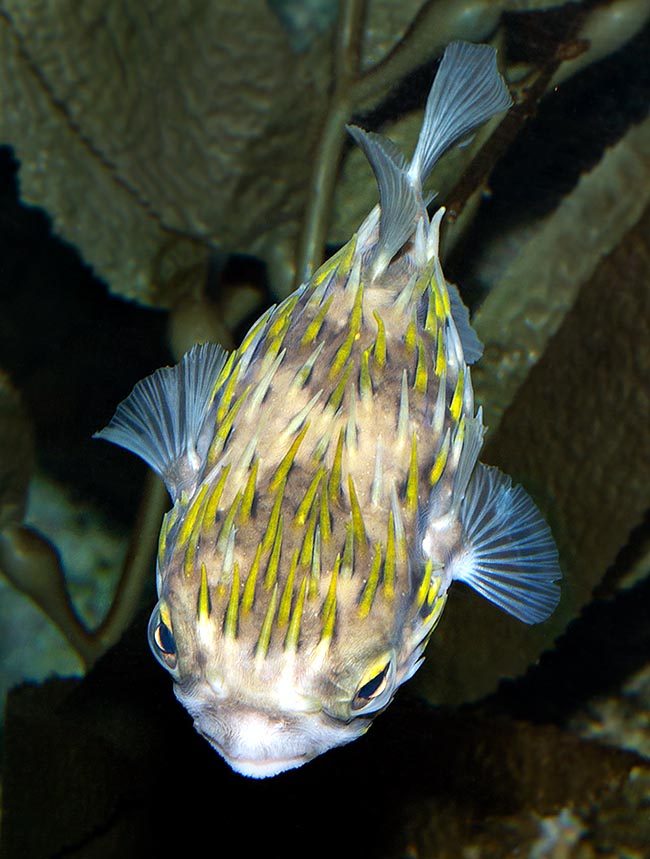 There is an elastic subcutaneous armour to allow the body to dilate as a ball by swallowing water and air, and immediately catch the eye the long erectile spines, white and yellow. After some scholars, they are not of bony origin but should come from transformed old scales. They are carried flat, like an ornament, but when the animal inflates they make the attack of the predators very difficult.

The gill opening stands a little before the pectorals and the lateral line is practically invisible. The livery, brownish above and silver white ventrally, displays 3-4 vertical dark bars on the sides.

The big expressive eyes, with its rather funny way of walking, immediately make it cute, almost like a small star of a cartoon, but if we grab it the spines cause painful wounds and if somebody dares to eat it, even cooked, it is good to keep in mind that, like the other bigger members of the family offered in the Japanese restaurants, various internal organs contain tetrodotoxin, a potentially fatal substance also for man because it blocks the breathing.

That is the classical fugu poisoning, and when the surgeons cooks do not their job well, there are no remedies, apart removing through vomiting the meat that remains in the stomach of the ill-fated and the maintenance of the vital functions with an indispensable mechanical ventilation.

The Diodon nicthemerus nourishes of invertebrates, especially bivalves hidden in the sand it slides with powerful water jets. The solid beak with two teeth crushes like a nutcracker the shell and lunch is ready.

When a female, with the belly full of eggs, is ready to hatch, the fecundation takes place in mid-water, but whilst the eggs of the other Diodon are carried away by the currents, these ones, unique case in the family, have are adhesive and stick to the bottom or to the first structure they meet for the whole incubation period of 17-19 days. 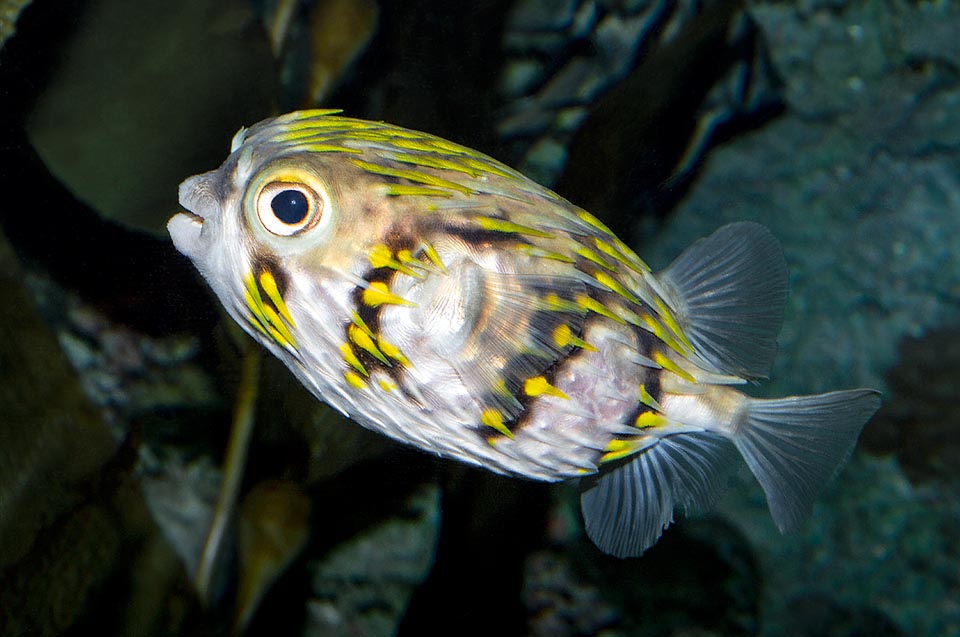 Cute as it is, would look like a toy, a nice character gone out from a cartoon, but if we try to catch it the spines cause painful wounds to the hands and trouble to who eats it: several internal organs contain tetrodotoxin, a substance potentially lethal even for man, because it blocks the breathing. Il is not an endangered species © Giuseppe Mazza

After some scholars, this prolonged immobility of the eggs stands at the origin of the relatively modest geographical distribution of this species.

Despite some catch, accidental or for the aquarium market, the vulnerability index of the Diodon nicthemerus seems today (2019) moderate, marking 29 on a scale of 100.