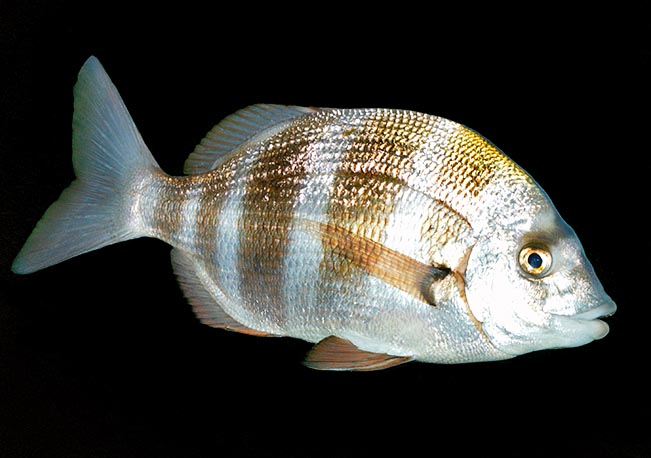 The Zebra seabream (Diplodus cervinus  Lowe, 1838), belongs to the class of Actinopterygii, the ray-finned fishes, to the order of Perciformes and to the family of Sparidae.

The name of the genus comes from the Greek “diplous” = two, and “odous” = tooth, therefore “double tooth” with reference to the double incisors, particularly evident.

The name of the species comes from the Latin “cervus” = deer, and therefore, “cervinus” = of the deer, deer-like, due to the showy vertical bands evoking the colour of this mammal.

Once present only in the southern Mediterranean, nowadays, with the global warming, it has colonized the entire basin, and after Gibraltar Strait, it is found, northwards on the Atlantic coast up to Biscay Gulf, and southwards up to Senegal, including Madeira and Canary Islands.

Then, there is a break, and omitted the warmest waters, it reappears in South Africa. Here, some talk about the subspecies Diplodus cervinus omanensis Bauchot & Bianchi, 1984, opposed to the Mediterranean one, the Diplodus cervinus cervinus Lowe, 1838, and they talk also of a Diplodus cervinus hottentotus Smith, 1844, present, after the Cape of Good Hope, along the Indian Ocean coasts. 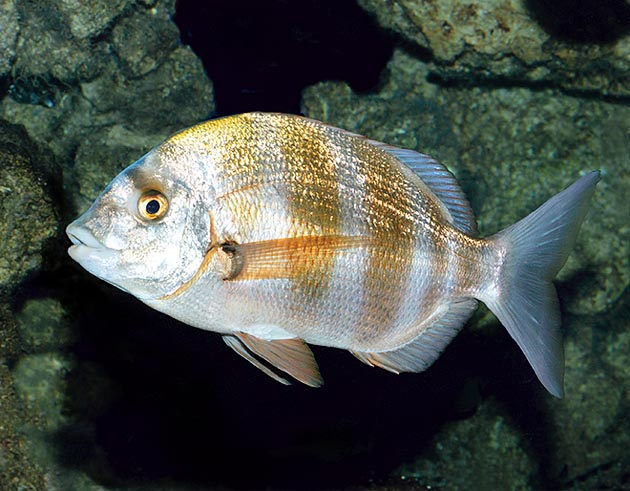 Named after the vertical deerskin coloured bands which, in the sea, often look golden © Giuseppe Mazza

The zebra seabream lives in deep waters, in the corraligenous areas, between the 30 and the 300 m, but it has been sighted also in the shallow ones, like the other breams. In fact, the juveniles swim in a few metres of water, frequenting the prairies of Posidonias (Posidonia oceanica), but then descend deeper and deeper, where they live in small schools in the marine reserves or isolated when the fisheries industry haunts them.

The body is tall, laterally compressed, and the profile of the snout somewhat reminds that of the Diplodus puntazzo, even if significantly less concave. The mouth, slightly protractile, is small with fleshy lips and solid jaws of equal size but with different tooth system: 10-12 incisors up and 8 below, followed, in both cases, by rows of molars.

The body is silvery grey, with golden hues, and the famous cervine coloured five bands. At the connection of the pectorals there is a black dot and similarly dark is the upper part of the snout and that between the eyes. 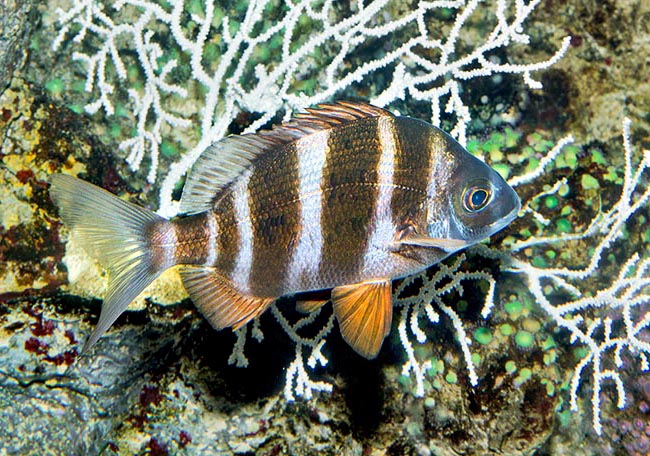 He lives in deep waters, in the corraligenous areas, between the 30 and the 300 m © Giuseppe Mazza

It reproduces only once a year with pelagic eggs, in Senegal between January and March, but apart this, little is known about its sexual life. Not at all surprising, seen that it is a relatively rare animal, endangered by sure, but which has not yet entered the famous “Red List” of the endangered animals only due to its vast diffusion and the scarcity of data.

Apart fishing, it seems that, depending on the zones, the minimum time for doubling the population varies from 4,5 to 14 years. The vulnerability index of this species is of 55 over 100.