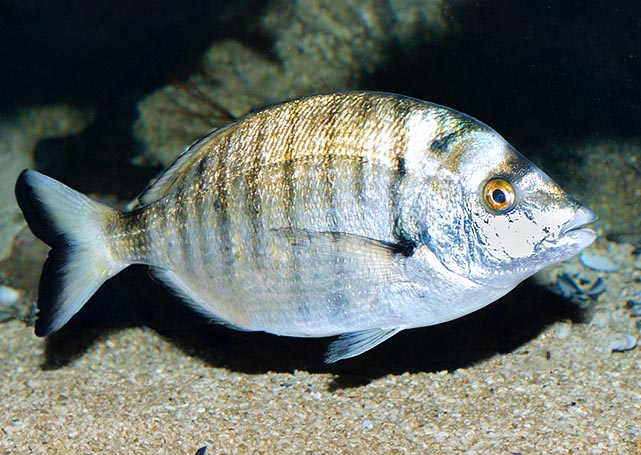 The Sharpsnout seabream (Diplodus puntazzo Walbaum, 1792) belongs to the class of Actinopterygii, the ray-finned fishes, to the order Perciformes and to the family of Sparidae.

The name of the genus comes from the Greek “diplus” = double, and “odous” = tooth, therefore, “double tooth” with reference to the double incisors, like for the horses.

The name of the species recalls the pointed snout.

It is present in all the Mediterranean, Black Sea included, and, after Gibraltar Strait, it is met on the eastern Atlantic coast, from the Biscay Gulf up to South Africa, including the Cape Verde and Canary Islands.

It swims along the coasts, among the rocks, up to 50-60 m of depth, or even lower, where, usually, spend their last years of life the old specimens in order not to be disturbed. Unlike the other breams, usually living in group, the sharpsnout seabream is a solitary fish, not attached to the territory, without den, which, in case of danger, prefers to escape. It is attached to the rocks, finally, only because food is found there, and for nourishing does not even disdain the brackish waters of the estuaries.

Even if it can reach the 60 cm and about 2 kg of weight, usually it just exceeds the kilo and the 40 cm.

It differs from the other breams, to which it morphologically resembles in the oval and compressed shape of the body, due to the profile of the snout. Usually this is convex, but here it is concave and forms almost a beak. 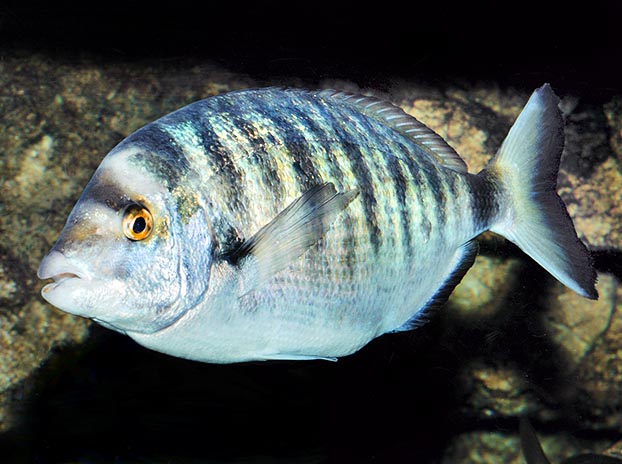 The teeth, placed over and under on one only row, have 8 cutting incisors bent forward for taking off the preys from the stones, followed by unassuming small molars.

Also the livery is typical, with 7-11 vertical black bands on the silvery body with golden hues. The iris of the eye is yellow.

The sharpsnout seabream nourishes of the small organisms living among the seaweeds attached to the stones: crustaceans, annelids and molluscs, which it cleverly takes off using its powerful incisors as if the were a chisel.

It is, therefore, a carnivorous diet which it integrates with yummy seaweeds.

Nothing in common, however, with the strictly vegetarian and trivial diet of the Saupe (Sarpa salpa) and, as a matter of fact, its white flesh is excellent, as well as that of the Gilthead seabream (Sparus aurata).

The Diplodus puntazzo is a protandric hermaphrodite species: in some cases the males become, on a temporary basis, females. It reproduces by late summer, early autumn, through countless pelagic 0,85 mm eggs which generate 1,7 mm larvae. Between December and March, the youngs reach the 5 cm and get in schools the coasts entering, at times, the estuaries. In this way they adapt to several salinities, and this euryhaline characteristic will stay with them for all their life.

The vulnerability index of this species is of 34 over 100.