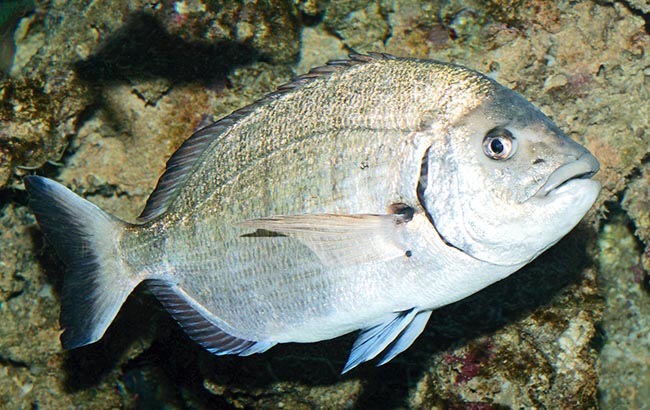 The White seabream (Diplodus sargus Linnaeus, 1758), belongs to the class of Actinopterygii, the ray-finned fishes, to the order Perciformes and to the family of Sparidae.

The name of the genus comes from the Greek “diplus” = double, and “odous” = tooth, therefore “double tooth” with reference to the incisors, present on both the jaws.

The name of the species “sargus” is the name the old Romans were giving to this fish.

It is present in the whole Mediterranean basin and, after Gibraltar Strait, it is found on the Atlantic coast, northwards up to Biscay Gulf, and southwards up to South Africa, including the Azores, Madeira, Canary and Cape Verde Islands. After the Cape of Good Hope, it goes north along the Indian Ocean coasts, even if with few individuals, up to the Arabian Gulf. Depending on the zone, some talk of subspecies or races based on small differences of colour. Diplodus sargus sargus for the Mediterranean, Diplodus sargus cadenati for the Atlantic and Diplodus sargus lineatus for the schools of Cape Verde, not to mention others, more questionable, proposed for the Indian Ocean.

It loves the Posidonias (Posidonia oceanica) prairies and the rocky coasts, also because, when feeling in danger, it needs a den. Euryhaline species, it spends good part of the summer in the brackish waters of the lagoons and of the estuaries, and goes back to the sea by early autumn, when it gets cold. It can reach the 50 m of depth, but we find it also in one metre of water in the ports and along the piers which offer shelters.

Typical oval and flattened, as suits a bream, it reaches the 45 cm exceeding the kilo. But in the locations were it is regularly fished, it has not the time for growing and usually measures 25-30 cm, with a weight of 400-600 g. The mouth is of modest size, with 8 incisors on each jaw followed by three rows of molars above and two rows below. But in some cases, on a side, even the jaw has three rows of molars … sign that it loves chewing on that side. 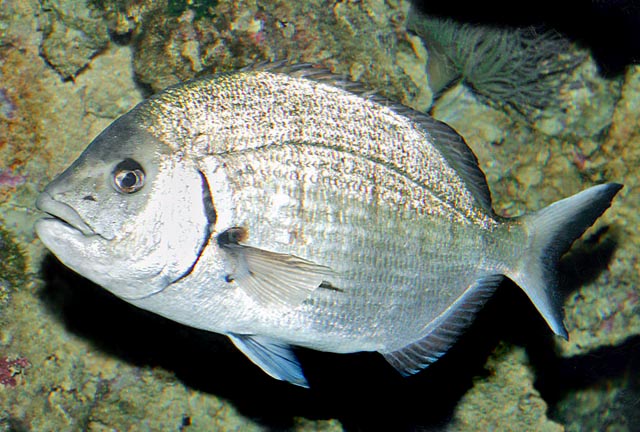 When 10 years old, it reaches 25 cm, but usually is fished before © Giuseppe Mazza

Like the analogous Sharpsnout seabream (Diplodus puntazzo), the white seabream shows some vertical bands through its silvery body. But they are paler and are only 7-8 against the 7-11 of the congener.

Moreover, the black dot, saddle-shaped, on the caudal peduncle never gets to the bottom. All these vertical stripes fade and almost disappear in the adults, ready to appear again or to intensify during the sleep and when the animal is scared, clear sign that they have a mimetic role. The operculum is usually edged in black and a dark dot is also noted at the base of the pectoral fins.

Those lucky enough to escape the nets, after having known the humans, tend to live, isolated, in deep waters.

Gregarious, in small schools when young, the white seabream may live 10 years. It nourishes of molluscs, limpets, bivalves or gastropods it finds among the seaweeds on the rocks, echinoderms and crustaceans. It happily eats, as if they were pastries, the holothurians, and makes raids, like the Gilt head (Sparus aurata), in the oysters and mussels farms.

When 25 cm, it reaches the sexual maturity and the reproduction happens between April and June with pelagic eggs. When the larvae reach the 9 mm, they move towards the coasts, in compact schools, and by August they already measure 3 cm.
The white seabream is very prolific, and in fact, if it was not fished, 1,4 to 4,4 years would be sufficient to double its population.

The Diplodus sargus is a protandic hermaphrodite species: this means that the males, ageing, may become females. But this is not the rule: some of them remain males, and many females are as such since their birth. The vulnerability index of this species is unfortunately already of 63 over 100.