The name of the genus comes from the combination of the Greek adverb (dis) = twice and the verb “σχίζω” (schizo) = to separate, to divide, with reference to the bifid lobes of the staminal corona; the name of the species comes from the Latin substantive “nummularius, ii” = tester of coins, but also deposit banker, moneychanger, with reference to the roundish shape of the leaves that recalls a small coin “nummulus, i”.

The Dischidia nummularia R.Br. (1810) is an evergreen herbaceous epyphitic species, with filiform stems with milky sap, climbing or drooping, up to 1,5 m long, rooting at the nodes. The leaves, on a 1-3 mm long petiole, are opposite, simple, orbicular to ovate with mucronate apex and entire margin, 0,7-1,5 cm long and of 0,7-1 cm of diameter, fleshy, thick, of pale green colour and covered by whitish powdery pruinescence. Axillar inflorescences, on a 0,5-1 cm long peduncle, with few subsessile flowers of white or cream white colour with urceolate corolla, 3-4 mm long, with 5 ovate-triangular lobes with acute apex, 1-2 mm long, 5-lobed corona with bifid apex with diverging and retroflexed segments, 5 stamens, with the filaments merged in a short column, and bilocular ovary. The fruits are fusiform follicles in pair, 3-4 cm long and of 0,5-0,8 cm of diameter, yellow or greenish, containing several seeds, about 2 mm long, provided at one extremity of a tuft of silky hairs, about 1 cm long, that favour their dispersion through the wind.

It reproduces by seed, that germinates in 4-6 days, in acidic very porous loam maintained humid at the temperature of 24-26 °C, but usually and easily by division and cutting, also in water. 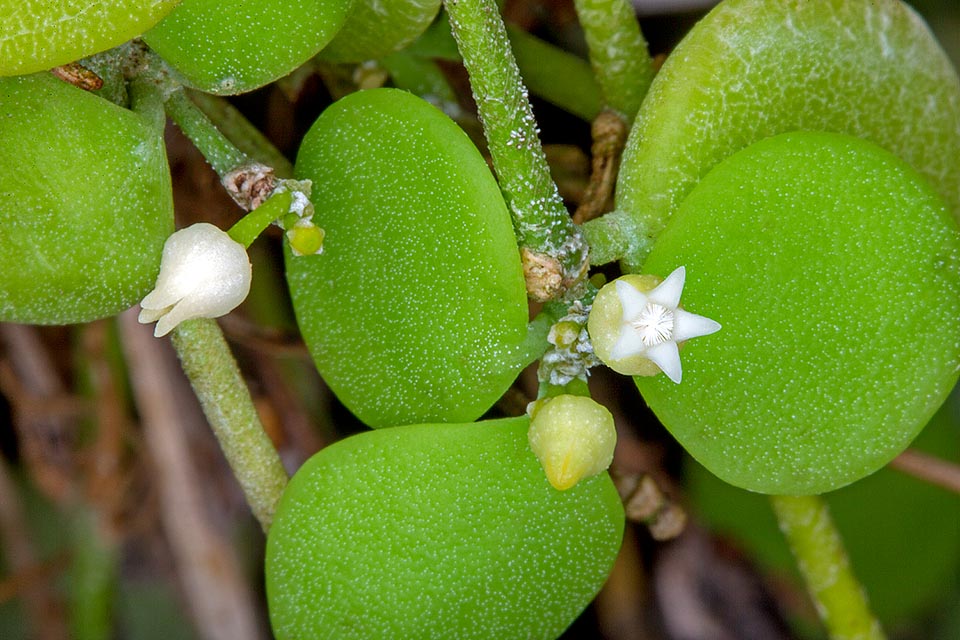 The Dischidia nummularia is a climbing epiphyte of South-East Asia with small leaves similar to coins that have given name to the species. Few tiny white flowers © Mazza

Slow growing species needing few cares, cultivable in open spaces on the trunks of the trees and on the branches, where with the time can form thick drooping masses, exclusively in the tropical and humid subtropical climate regions, in filtered sunny light as well as in partial shade.

Elsewhere, it is to be kept during the winter months in a protected very luminous environment with averagely high temperatures, 20-28 °C, and lowest night values in winter not under the 12 °C, utilizing as support trunks or pieces of bark covered by sphagnum, or pots or suspended baskets with very aerated and draining loam that may be formed by coarse peat or fragments of coir with addition of agri-perlite or expanded clay; alternatively can be used a compound for epiphytyic orchids. Regular and abundant waterings with non calcareous water during the vegetative period, but without stagnations, being easily subject to rottenness, allowing the compound to dry up partially before giving water again, more spaced in winter, but without ever allowing the substratum to dry up completely, maintaining an averagely high environmental humidity, 50-65 %, and a good ventilation. Monthly fertilizations, in spring-summer, with hydrosoluble products specific for succulents, at half dosage, or less, than what shown on the package. Particularly subject to the attack of mealy bugs, it is therefore to be periodically checked in order to be able to intervene rapidly with specific products.