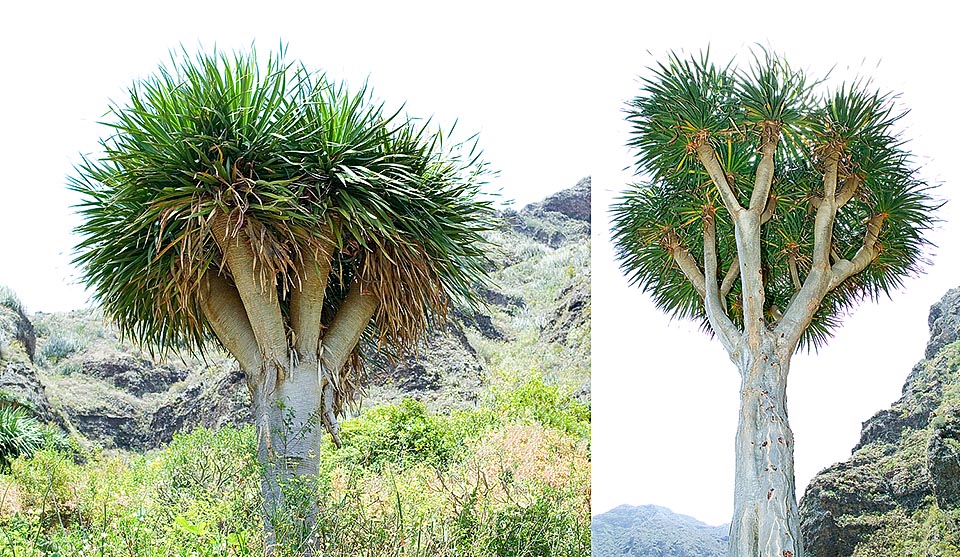 Young specimens of Dracaena draco in the Canaries in their environment. The growth is very slow and the species is considered vulnerable in nature © Giuseppe Mazza

The Dracaena draco (L.) L. (1767) is native to the Açores, Cape Verde, Canary Islands, Madeira and Morocco where it lives in the dry forests on rocky soils at low altitudes. 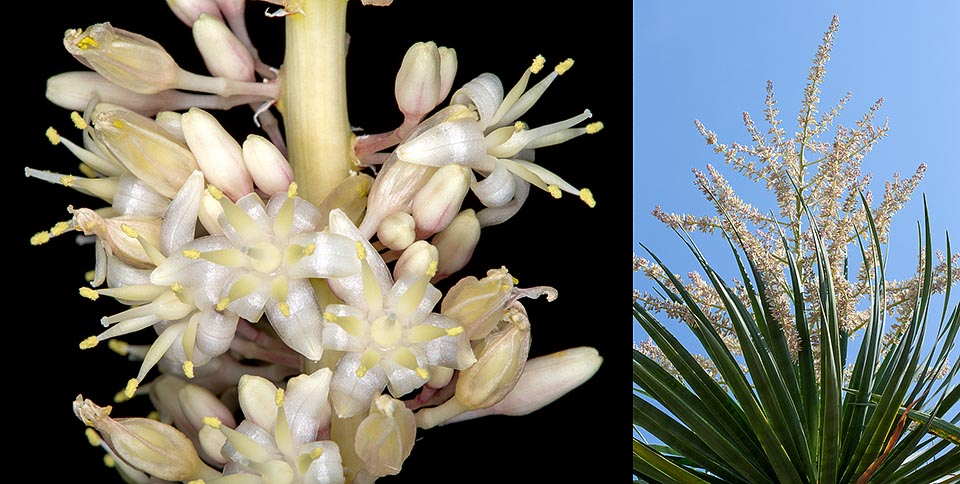 The tiny night fragrant flowers, with 6 tepals of 8-10 mm, close at dawn. They are merged in panicle terminal inflorescences. The first blooming of Dracaena draco occurs by the tenth year of life of the plant, but in some cases may be considerably delayed. The further blooming follow at 10-20 years intervals © Giuseppe Mazza

Evergreen species with arboreal posture of slow growth up to about 12 m tall – even if in nature do exist rare specimens having a major height – with robust cylindrical greyish stem that ramifies by dichotomy (partition of the apex into two branches that, at their time, split repeatedly) after the blooming.

It presents on the apexes of the branches dense rosettes of lanceolate leaves with pointed apex and entire margin, of greyish-green colour, orange at the base, coriaceous, up to 60 cm long and about 4 cm broad, forming an umbrella-shaped canopy. 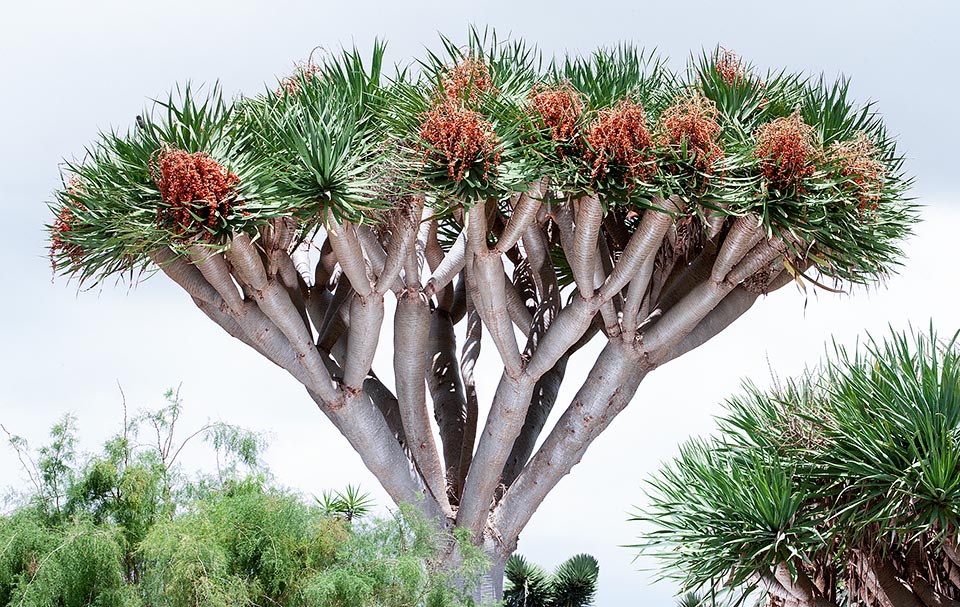 From the stem and the notched leaves comes a resin that while drying up in contact with the air gets a dark red colour, known also as “Dragon's blood” © G. Mazza

The fruits are globose berries of red-orange colour, of the diameter of about 15 mm, containing one-two globose seeds of 6-8 mm of diameter. The first blooming occurs around the tenth year of age, but in some cases it may be considerably delayed, the further ones follow in 10-20 years intervals. From the stem and the notched leaves gets out a resin that when drying in contact with the air assumes a dark red colour, known as “Dragon’s blood”.

It usually propagates by seed, previously scarified in order to speed up the germinative process, placed just under the surface in draining sandy loam maintained moderately humid at the temperature of 22-24 °C; the seed needs light for germinating, therefore the sowing vessel is to be placed in a particularly luminous location.

The germination times are fairly variable, from one to three, or even more, months. It can reproduce, even if with a certain difficulty, by air layering or apical cutting in summer. 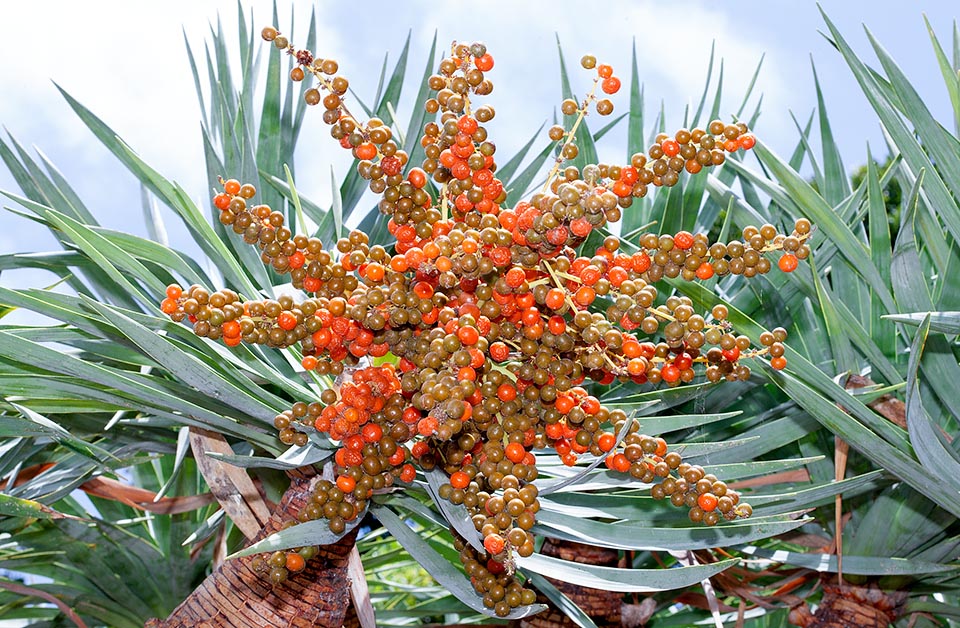 The fruits are globose red-orange berries, of the diameter of about 15 mm, containing one-two globose seeds of 6-15 mm of diameter © Giuseppe Mazza

Species of great effect when adult as isolated specimen, cultivable in the subtropical and temperate warm climate zones in full sun and in draining soils, fearing stagnant waters; it may stand long drought periods and, when adult, temperatures up to -4/-5 °C for a very short period.

It can be cultivated in pot for rather long time, seen the slow growth, in luminous place, caring particularly the drainage of the soil, with regular waterings from spring to autumn, spaced in winter, and monthly fertilizations utilizing a hydrosoluble balanced product.

Sacred plant for the natives of the Canary Islands, the Guanches, due to the particular characteristics of its resin that was used for embalming the dead, has been since the remote times, also outside the origin places, at the centre of legends where they were attributed magic and curative properties. 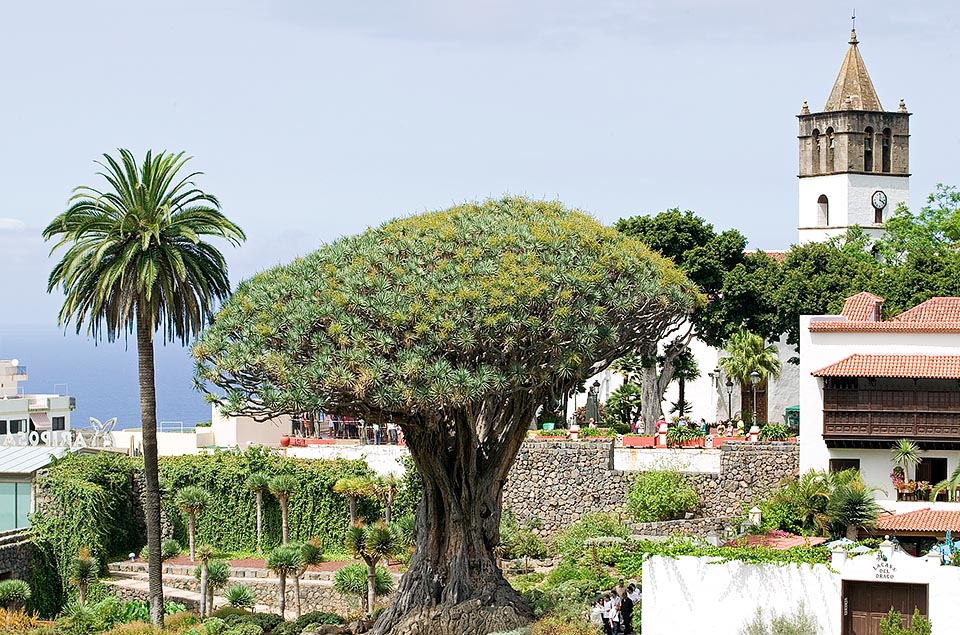 Moreover, the resin has been amply employed for long time for the production of dyes and still now is utilized in the varnishes of violins and of quality furniture. Laboratory studies have evidenced in various parts of the plant the presence of numerous bioactive compounds of possible interest for the official pharmacopoeia.

Because of the reduced number of individuals extant in nature, the species has been inserted in the red list of the IUCN (International Union for the Conservation of Nature) as “vulnerable” (species under extinction risk in the wild).