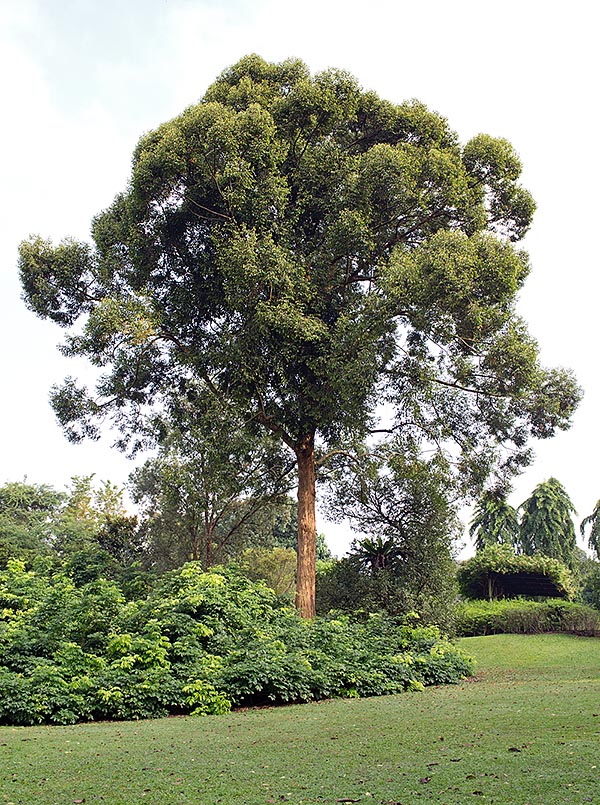 The species is native to Indonesia (Kalimantan and Sumatra) and Peninsular Malaysia where it grows in the pluvial forests in limited coastal areas, often representing the dominant species, on hilly slopes up to about 350 m of altitude, preferably on sandy or stony soils.

The name of the genus is the combination of the Greek terms “drys, dryos” = oak, “balanos” = acorn and “opsis” = appearance, with reference to the fruits similar to acorns; the Latin name of the species “sumatrensis” = of Sumatra, refers to one of its places of origin.

The Dryobalanops sumatrensis (J. F. Gmel.) Kosterm. (1988) is a resinous evergreen tree, up to more than 60 m tall, with cylindrical trunk of diameter up to about 2 m with basal buttresses and brown reddish bark tending to flake off in the adult plants.

The fruits, containing only one seed, are indehiscent, ovoid, about 3 cm long and of 1,5 cm of diameter, with woody pericarp, which, at the moment of the germination opens in three valves, with persistent cup-shaped calyx surrounding partially the base and 5, 4-6 cm long, wings, resulting from the growth of the sepals, which favour its dispersion by means of the wind. It reproduces by seed which germinates in 5-8 days at the temperature of 26-28 °C.

Vigorous and fast-growing species cultivable in the humid tropical and subtropical zones in full sun, excepting the juvenile phase when it needs a slight shade. The tree furnishes an oleoresin secreted in cavities in the trunk and which usually exudes from the bark, called Borneo or camphor oil, not to be mistaken with that extracted from the Cinnamomum camphora, and borneol crystals, organic compound similar to that of the camphor, which deposit in vertical fissures in the trunk, object of a flourishing trade since the Middle Age, used in perfumery and especially in the traditional medicine and in aromatherapy, replaced in the modern times by synthesis products.

The wood is of medium hardness and of discreet duration, resistant to fungal attacks, yellowish to brown reddish after exposition to the light, with a scent of camphor lasting for long time, variously used in the constructions, for boats, quality furniture, frames and carpentry in general. The species has revealed as particularly suitable for the reforestation in degraded zones.

Due to the indiscriminate cuts for recovering the borneol crystals its population has remarkably reduced and for such reason in 1998 has been inserted by the International Union for Conservation of Nature (IUCN) in the red list of the endangered species as “Critically Endangered”.

→ To appreciate the biodiversity within the DIPTEROCARPACEAE family please click here.