Dypsis procera Jum, H. Perrier (1945), is a medium-sized monoecious species, native to the humid underwood of the tropical forest of north-eastern Madagascar, in particular to the outskirts of Antongil Bay. Usually, it is found in the plain but grows also on hills of up to 600 m of altitude.

The name of the genus Dypsis Noronha ex Mart. (1838) has an unknown etymon. After some it might come from the Greek “dýpto”, that means to dive, to dip, but more is unknown. The specific name procera comes from the Latin procerus that means of tall stature. This name could appear inappropriate, but at that time the genus Dypsis did not include the present more than 170 species, and this was one of the tallest.

Multi-stemmed palm, quite rarely solitary, of modest size, tends to form colonies that propagate by means of underground stolons. The stems are erect, up to 6 m tall, similar to bamboo canes, with a diameter from 1 to 2,5 cm, of green colour and covered by dark brown scales. They present long internodes coming from the fallen foliar bases, spaced 2 to 10 cm. 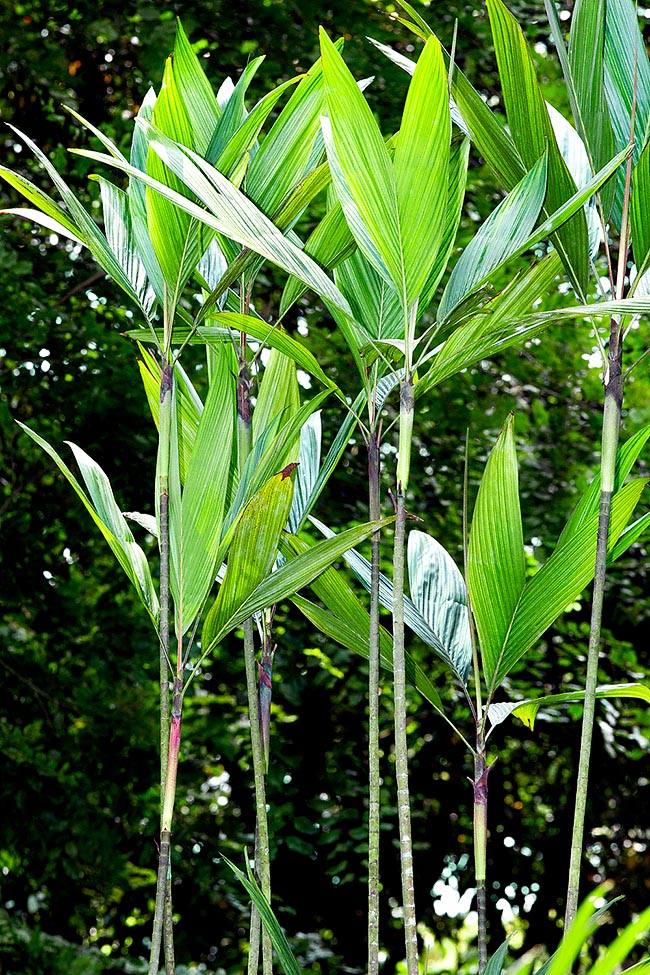 Dypsis procera is a monoecious multi-stemmed species, native to North East Madagascar forests where it can be 6 m tall, with bamboo-like stems. Easy cultivation, possibly also in pot to decorate apartments and winter gardens © Giuseppe Mazza

The foliar crown usually is formed by 7-8 leaves, 40 to 60 cm long, usually entire or, more rarely, irregularly divided in segments. In the latter case the segments are wider at the base of the rachis and thinner at the centre. The lamina ends with two big symmetrical segments. The surface of the lamina is dotted with several tiny red-brown scales along the main and secondary veins.

The petiole, 0,5-0,8 cm broad, usually measures 10-25 cm. Rarely shorter, up to 3-4 cm, displays scattered red coloured scales. It ends in the foliar sheath that wraps totally the trunk. 17-31 cm long, with 1,5-2,5 cm of diametre, this is pale green covered by red-brown scales and has an irregular hem.

The inflorescence emerges under the foliar sheath and is initially covered by a deciduous bract having a protective function. The peduncle is 35-46 cm long, with a diametre of 0,5-0,7 cm and is covered by brown scales.

The inflorescence develops in two orders on a 14-35 cm long rachis, as scaly as the peduncle, that bears 8 to 13 branches of the first order, each one, in turn, bears 2 to 6 branches of the second order.

The unisexual flowers are arranged in triads formed by one female and two male flowers.

These last tend to bloom before the female ones, in order to favour the phenomenon of cross pollination.

The ripe fruit is dark green, ellipsoidal, 7 mm long and 3 mm broad. The endosperm is homogeneous and only one seed is present.

Dypsis procera is a very known species and is appreciated in cultivation, mainly for its entire and bifid shape, that has undoubted ornamental qualities.

The seeds are often available commercially and germinate quickly, with ease, even in less than one month. The cultivated plants are smaller than those in nature and are therefore quite suitable for the cultivation in pots to decorate apartments, verandas and winter gardens.

It grows well in the tropical and in the warm subtropical climates, where temperatures never drop under the 5 °C, but prolonged periods under the 10 °C may be sufficient to kill the plant. Especially when young, it needs an exposition in the shade or half shade, but later, when adult, stands also a few hours of sun per day. This species is not demanding for what the soil is concerned, but needs good drainage. For the cultivation in pot it is better to mix sand or perlite to the compost at least by 25%. As it is coming from the rainforest, it needs frequent nebulizations and high levels of air humidity. The soil must never be left dry between one watering and the next one.

Dypsis procera is presently considered as a vulnerable species by the IUCN Red List of Threatened Species. In fact, it has a very limited distribution, and if threatened, without any protection, by agricultural deforestation.