The  Encephalartos ferox G. Bertol. (1851) is a dioecious species native to South Africa, present from northeast KwaZulu-Natal in South Africa to the Inhambane province of Mozambique.

It is a plant that has adapted to the subtropical warm-humid conditions present on the coasts of the Indian Ocean and is an important component of the dune shrubby formations, in such habitats, where the fires are frequent, this species is at times undergoing considerable damages to the foliage, whilst the stem, mostly covered by sand, is relatively protected from the fire. The Encephalartos ferox grows also in the hinterland, usually in sheltered positions in the shadow of big trees. In this situation the leaves are stronger and bigger than those growing in full sun or exposed to the marine breezes rich of saltiness.

The genus Encephalartos, created by the German botanist Johann Christian Lehmann in 1834, comes from the Greek terms “ἐγκέϕαλος” (encéphalos) = brain and   “ἄρτος” (artos)  = bread, to indicate the starchy compound located in the stem, source of food, once, for the local populations. The specific term ferox = ferocious on Latin, refers to the particularly spiny leaflets. 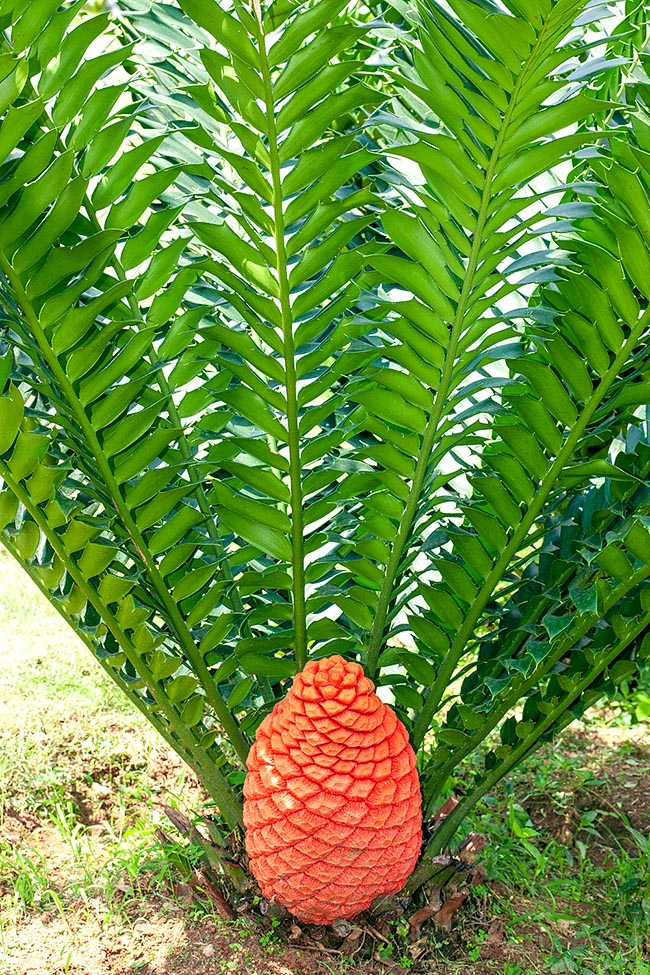 The birth of this species starts from an Italian collector of plants, the Cav. Carlo Antonio Fornasini (1805-1865), passionate dealer and naturalist, who worked in Africa and was in contact with the Academy of Sciences of the Institute of Bologna.

From 1839 onwards, Fornasini collected several botanical specimens of plants in the District of Inhambane, in Mozambique, at that time Portuguese Eastern Africa, that were despatched to Prof. Giuseppe Bertoloni (1804-1874), professor at the Chair of Botany in Bologna. Among the various findings sent by Fornasini stood also one big leaf of cycad, that Bertoloni described in 1851 as Encephalartos ferox.

In July 1920, two South African botanists, Robert Attken and George Gale, visited  Maputaland in the northern KwaZulu-Natal, south to Maputo, in Mozambique. In the are area of the Bay of Kosi they found a cycad with an unknown appearance and the English botanist John Hutchinson of the Royal Botanical Gardens in 1932 gave it the name of Encephalartos kosiensis, term now downgraded to synonym of Encephalartos ferox.

Encephalartos ferox presents a solitary stem, usually underground, that can assume an arboreal posture and reaches even 1-2 mm of height with 30-35 cm of diameter, rarely ramified, often emitting young suckers at the soil level.

The rich crown of leaves, with the outer ones spreading downwards covering the stem, is particularly decorative.

In the tallest specimens, the old withered leaves remain attached to the stem and the remaining foliar bases gather one another, for years, until when the fire in charge cleans up the plant.

The leaves are of dark green colour, glossy, 1-2 m long and 30-36 cm broad, straight or slightly arcuate and flat. Only in the emerging phase they appear densely tomentose. The petiole is 9-24 cm long with 15-18 mm of diameter.

In the central part of the rachis, the leaflets are about 15-18 cm long and 3,5-8 cm broad, have 2-4 spiny lobes of medium size on both margins and 3-5 amply triangular at the apex lobes. The lobes are rotated on levels differing from that of the lamina and the margins are revolute. The lamina reaches the maximum of the breadth between the centre and the apex and ends with one or two spines. The size of the leaflets reduces progressively towards the base of the rachis.

The female cones, usually 1 to 3, but even 5 in the big plants, have an ovoid shape, 20-40 cm broad and about 25-50 cm. Their colour,, rarely yellow, is mostly orange or bright red. The peduncle is so short that often the cone seems to be sessile. 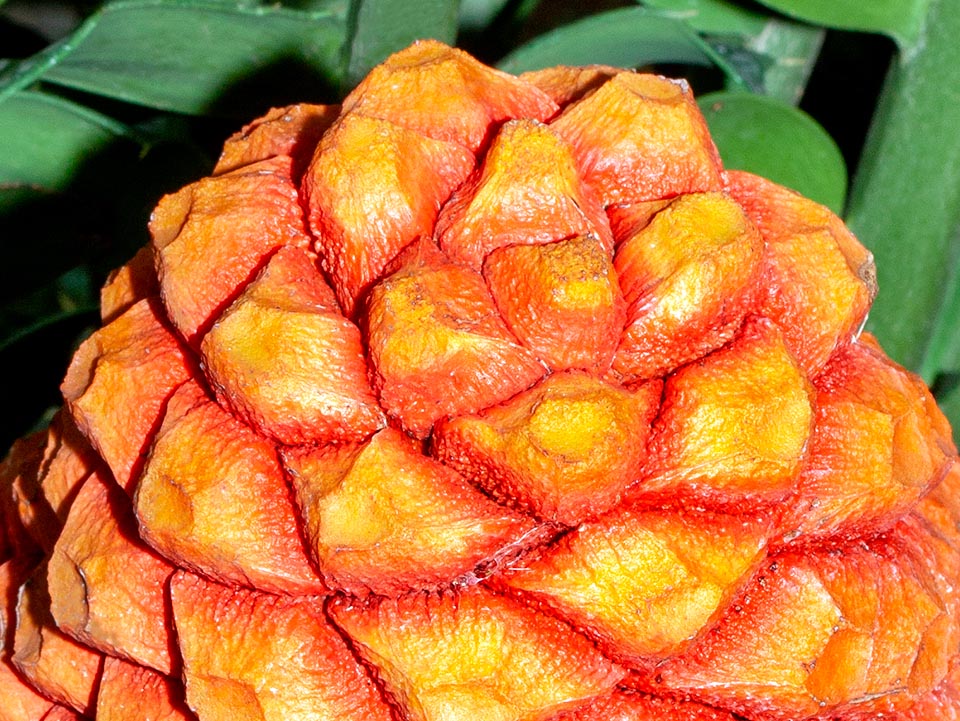 Close-up of female cone, even 40 cm tall. The seeds are inside these plygonal structures, called megasporophylls, open when ripe © Giuseppe Mazza

They are formed by megasporophylls, the equivalent of the scales of the cones of the conifers, 15-18 mm tall and 38-42 mm broad. They have a wrinkled appearance and end with pronounced protuberances with distinct facets. The vermilion seed, visisble when they open, when ripe, is ovoid, 44-50 cm long and 15-20 cm broad.

Seen its vast range, Encephalartos ferox shows remarkable variations. Usually the stems are undeground, but at the northern limit of their range in Mozambique they may exceed the 2 m of height, and the leaflets vary from flat, with small spines on the margin, to rolled up, almost tubular the plants with the leaflets rolled up are found mainly in the Chongoene district in Gaza province, Mozambique. 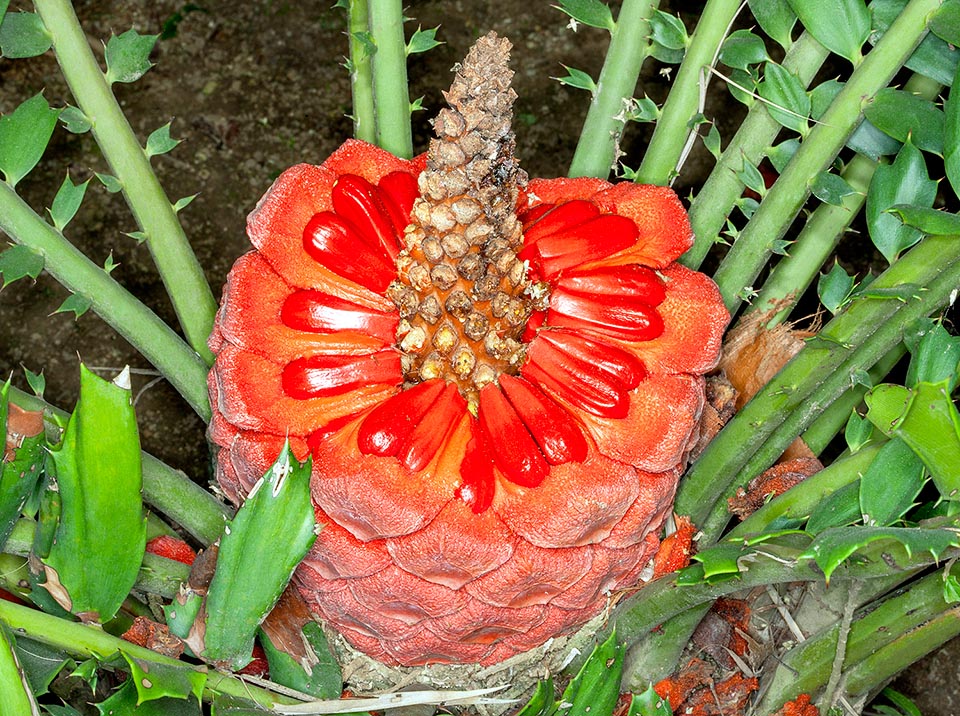 This cone has already dispersed many vermilion seeds. We see the central rachis where the megasporophylls were stuck, now very similar to the conifers scales © G. Mazza

As previously mentioned, historically the Encephalartos ferox has covered an important rôle in the survival of the local populations of Mozambique. Like other similar species, the pith is in fact almost pure starch and if treated correctly it produces a good flour.

Undoubtedly, the Encephalartos ferox is one of the most beautiful and interesting African Zamiaceae. It grows quickly and is easy to cultivate. Nothing surprising, therefore, seen also the unusual colour of the cones, that it is often present in the botanical gardens, winter gardens and amateur collections. It reaches the maturity, with production of cones, in less of 10 years and it is suggested  a well draining substratum, with a minimum input of nutrients and a rather warm habitat.

The anthropic pressure in Mozambique and the deforestation in South Afruca have impoverished the distribution area of this plant, that during the recent past years has met also wild uprootings in nature for commercial purposes. Hence, Encephalartos ferox is considered a species under risk of extinction (IUCN) Red List and is inserted in the Appendix I of the Convention on International Trade of Endangered Species (CITES).

Encephalartos ferox was last modified: May 8th, 2020 by Peppino