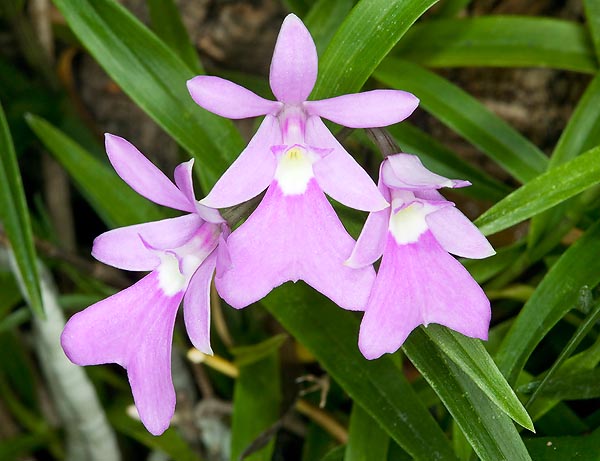 The species is native to Costa Rica, El Salvador, Guatemala, Honduras, Mexico (Chiapas), Nicaragua and Panama, where it grows in the humid forests between the 1000 and the 2400 m of altitude.

The Epidendrum centropetalum Rchb.f. (1852) is an epiphytic or terrestrial species
with thin, close together, stems, long up to about 75 cm, with alternate leaves,
distichous, oblong-linear, 3-8 cm long and 0,4-1,6 cm broad, which, with the time, tend to fall starting from the lowest ones, with warty foliar base wrapping the stem.

Racemose inflorescences, rarely ramified, at the apex of the stems, up to 10 cm long, carrying a variable number of small flowers of the diameter of about 2-2,5 cm, of colour mainly from dark pink to purple pink; long-lasting flowering, four weeks about, mostly between late winter and early summer.

It reproduces by seed, in vitro by division and, easily, by means of the young plants forming at the nodes along the stem (in jargon “keiki”, which in Hawaiian means “sons”) that may be removed when they have formed a good rooting apparatus.

Species of easy cultivation for temperate-warm climate, it requires high humidity, 60-80%, filtered sunlight or slight shade, with lowest temperatures in winter which have never to get under 14-16 °C.

It does not require a precise resting period, only a reduction of the waterings after the flowering until the vegetative regrowth. It does not stand water stagnations at the roots, which must dry up completely between the waterings, therefore these ones are to be duly spaced, for such reason they are mounted preferably on bark or cork raft, with possible sphagnum at the base for keeping the humidity; if cultivated in a container, are to be chosen small pots with a much draining and aerated compost, this can be formed by medium-large sliced bark fragments and charcoal.

For the waterings and the nebulisations are to be utilized rain water, or water obtained by reverse osmosis or demineralised; the fertilizations, duly distributed in way to avoid salts accumulations, are to be done preferably with hydro-soluble balanced products, with microelements, at ¼ of the dosage suggested on the package. Repottings, transplants and divisions are to be done by the end of the flowering.