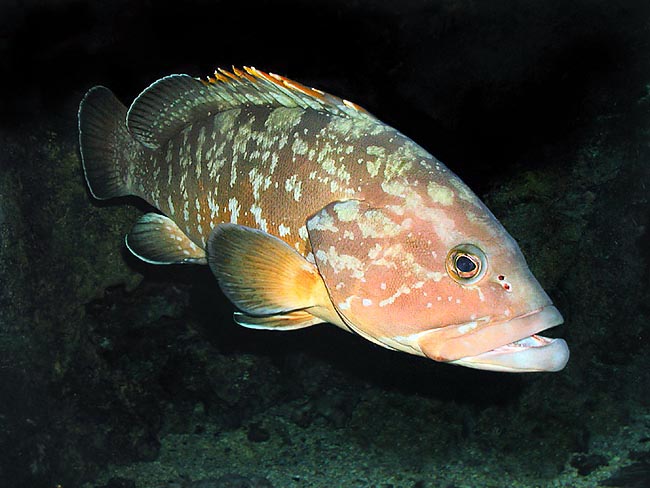 Once common in Mediterranean, Epinephelus marginatus is threatened by industrial fishing © Giuseppe Mazza

The Dusky grouper (Epinephelus marginatus Lowe, 1834) belongs to the class of Actinopterygii, the ray-finned fishes, to the order of Perciformes and to the family of Serranidae.

The name of the genus comes from the Greek “epinefes” = cloudy, with probable reference to the mimetic patterns, and often changing, which characterize these fishes.

The name of the species “marginatus” is coming from the Latin “provided with a margin”, with reference to the edge of the fins, which have a clear margin.

Once this species was very common in the Mediterranean, but by dint of going to the pot, due to the facility of catching and the prized flesh, it has almost disappeared in many zones, so much that in some nations, like in France, they have laid moratoria to the industrial fishing and the Principality of Monaco even forbids its sport fishing with the “Ordonnance Souveraine N° 107779” dated January 29th, 1993. It is absent in the Black Sea, but, on the other hand, beyond the Gibraltar Strait, we find it along the Atlantic coasts: northwards, up to England and southwards up to, and beyond, the Cape of Good Hope. From here, it goes along the Indian Ocean African coast and it is reported in the waters of Madagascar, in the Gulf of Oman and at Reunion Island. On the other side of the Atlantic Ocean, it is present in Brazil, Uruguay and Argentina.

It lives on the rocky seabeds, usually in the first sixty metres of depth, depending on the size and the seasons, but it seems that the old specimens may go down up to 300 m. 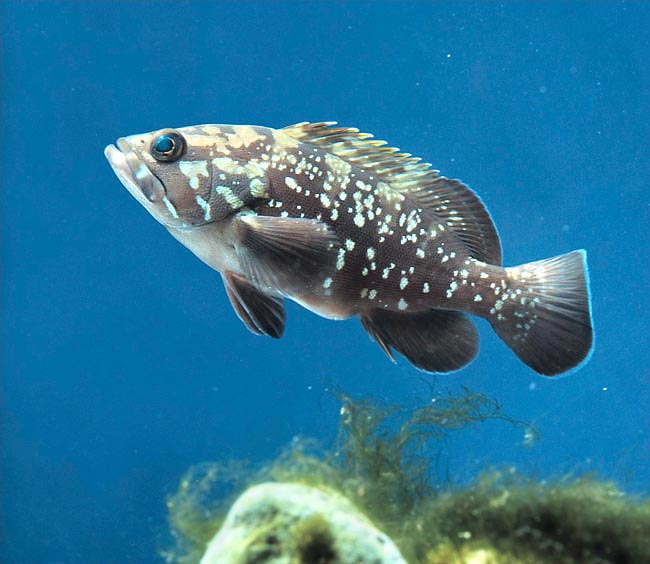 Recent studies done in France have confirmed, by means of transmitters placed on six specimens, that the Epinephelus marginatus is and extremely sedentary animal. When it has found a safe den among the rocks, with a good hunting territory around, it will keep it for years. Therefore, taken into account that it has a lifespan of 50 years, it is very sensitive to the changes made ny the man along the coasts.

It can reach the 150 cm and a weight of 90 kg, but usually, nowadays, we meet much smaller specimens due to the industrial and sport fishing.

But we have to think that a recent symposium held in Monte Carlo has concluded that a live dusky grouper, which enriches the seabeds with its presence by attracting the diving tourists, is much more profitable than a grouper in the dish. The body of the Epinephelus marginatus, imposing, almost ovoid, with a big head and a huge, often open, mouth, has indeed all the necessary requirements for fantastic souvenir photos, so much that, in the reserves, often allows to be approached.

On both jaws we see, on the front, 4 caniniform teeth, followed by others, smaller, hooked, and the interior of the mouth is covered by rows of minor teeth. The only one dorsal fin had the first part formed by spiny rays, in this case 11, whilst the anal, smaller, has only 3 of them. The pectoral and ventral fins have no spines, are rounded as a spatula, and, unlike the other groupers, the tail remains roundish also in the adults. The background colouration is brown-chocolate on the back and yellow-orange on the belly, with clearer dots and patterns, at times almost greenish, which may form mimetic vertical bands, visible only when the animal is alive and which disappear at the air a few hours after the demise. 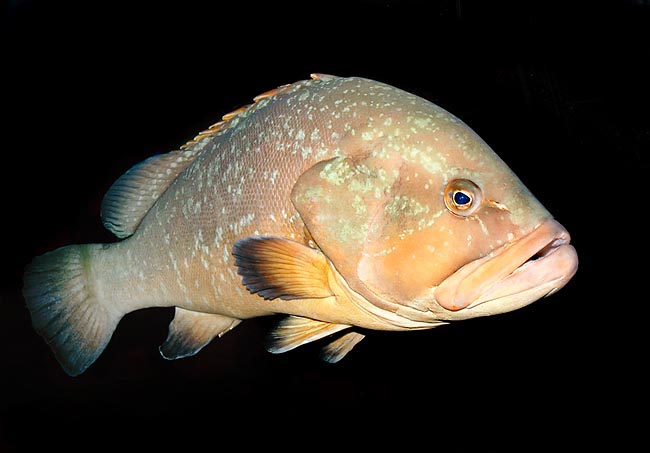 It is a protogynous hermaphroditic species, but the transformation of the old females into males is not automatic, as it was thought once.

The Monte Carlo symposium has revealed, in fact, that this change depends on environmental factors, on the age, and, especially, on the composition and the social life of the school. In fact, at the time of the reproduction it may be observed: