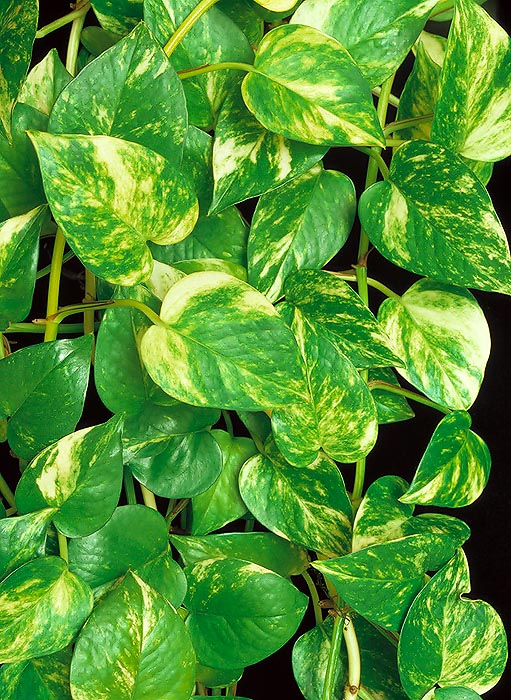 One of the most cultivated indoor plants. Easy also in hydroponics © Giuseppe Mazza

The Epipremnum aureum (Linden & André) G.S.Bunting (1964) is native to the Society Islands (Moorea).

The name of the genus comes from the combination of the Greek words “epi” = over, and “premnon” = stem, with reference to its climbing appearance; the Latin name of the species, “aureum” = golden, refers to the yellow variegations of the leaves.

Evergreen, hemiepiphytic climber, with greenish yellow stems adhering to trunks and roks by means of aerial roots, it shows the phenomenon of the heterophylly (bearing foliage leaves of different forms on the same plant), the young specimen in cultivation show undivided, cordate egg-shaped leaves, 5-20 cm long, of an intense glossy green colour, more or less variegated in yellow or cream; in the adult ones, the stems can reach heights of 10-12 m and more, with leaves irregularly lobate, up to 70-90 cm long and 40-45 broad, with wide and irregular yellow variegations.

The plant rarely blossoms, and this has made difficult its botanic classification and even nowadays its existence as a different plant is controversial, as some consider that it is a variety of Epipremnum pinnatum.

It easily multiplies by layering and by portions of stem, which very easily root, also in water, where the plant can remain and grow up for a long time.

The plant is cultivable in open spaces in the tropical and humid subtropical regions, where it is often utilized, both in shade and in filtered sunlight, to cover the soil, to cover rocks and walls, on which it adheres with its aerial roots, or to climb trees. When in pot, it’s one of the most cultivated indoor plants due to its adaptability, facility of cultivation and speed of growth, it bears for long time poorly luminous locations, even if a high luminosity, but far from the direct sun, helps to get a luxuriant vegetation and to exalt its variegation; furthermore, in spite of its origin, it can live for short periods also in scarcely humid positions.

It needs very porous, draining and rich of organic substance substrata and temperatures over the 14-16°C, best around 18-22°C, and can be utilized as hanging or as climber on supports covered by bog moss or synthetic material capable to maintain the humidity. Watering must be regular in summer, always avoiding water stagnations which can originate rottenness, with the substratum which can dry up on the surface between watering, without causing any damage to the plant, and reduced in winter, but without drying up completely.

All the parts of the plant contain toxic substances, in particular calcium oxalate, which can be the cause of atopic dermatitis and reactions, even serious, if chewed and swallowed.