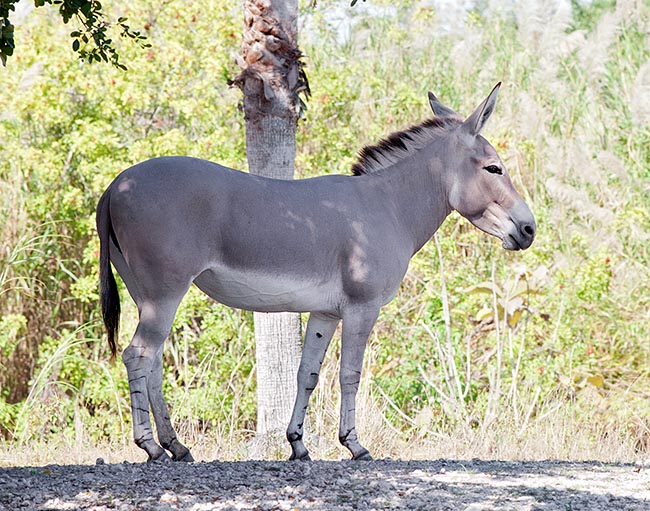 The Atlas, or Algerian wild ass (Equus africanus atlanticus) is considered extinct approximately from the 300 BC probably due to the Roman sport hunting.

The Somali wild ass along with the Nubian wild ass (Equus africanus africanus) is protected by the CITES 1 and is listed as “critically endangered” into the IUCN Red List.

The Nubian wild ass was present in the Nubian Desert, in north-eastern Sudan and probably also in north-western Ethiopia, and in some zones of Eritrea. The absence of recent sightings of specimens of Nubian wild ass in the regions where it lived wild, joined with the fact that there are no specimens of this subspecies, kept in captivity, lead to think that this African wild ass became extinct already around the 1950. The excessive hunting and the hybridization with domestic asses are the main causes of the drastic decrease of wild asses. Also the competition with the cattle for the food and the water, in particular during the drought periods, may heavily influence the frail survival of this splendid animal.

When we speak of animal species in danger of extinction, the thought of most people goes to the giant panda (Ailuropoda melanoleuca), to the tiger (Panthera tigris), to the wolf (Canis lupus) and to all a series of animals which are charismatic, famous for their beauty or for their characteristics of strength and size.

At the same time, animals that have become, due to their rarefaction, sadly famous. Talking of rare animals to protect, nobody thinks to the Somali wild ass, an animal treated very badly by the man and now, at last, protected but with a severe delay and with continuous problematics far from being settled.

We should dwell to think about the importance this wild species has had and still has in the history of man: the African wild ass (Equus africanus spp.) has been caught and tamed by the Egyptian or Mesopotamian people about the 5000 BC and is therefore the ancestor of the domestic ass (Equus asinus) and of its innumerable existing breeds. Its strength, resistance, sturdiness and its sure-footedness have done of the ass (Equus asinus) the ideal workmate of the man. Still now, this animal of the immense educational value is utilized in many rural zones all over the world.

The Somali wild ass, the last surviving African wild ass, as we said is strongly endangered in the wild and results in being the most endangered species of equid in the world. Its population, from the 1970, has reduced of the 90%. It is thought that the present wild population does not exceed the few hundreds of individuals surviving in remote parts of Eritrea, Ethiopia and Somalia. The species was previously more distributed in Eritrea, Ethiopia, Somalia and Djibouti where now it is thought to be extinct. The reserves hosting the species are the Mille-Serdo Wild Ass Reserve and the Yagundi-Rassa National Park in Ethiopia, even if recent observations in this last have not occurred. In Somalia, the last remained specimens, survive in the Nugaal Valley. The greatest wild surviving population lives in Eritrea in the Messir Plateau.

The Somali wild asses are adapted to live in the arid environments typical of the desert and semi-desert zones as they can remain without drinking even for some days. This species has undergone some physiological changes which allow living in habitats with less than 200 mm of annual rainfall. The largest number of the few surviving specimens lives in protected areas where, however, they have to meet serious menaces like being chased by the local shepherds who consider them as competitors of their own cattle. They are also hunted, by the local populations, for the flesh and the skins. Last but not least, the civil wars of the zones where they do live, the conversion of the habitat into farmlands, the diffusion of new human dwellings and the hybridization with domestic asses render extremely difficult the survival of this species.

Luckily, the Somali wild ass since 1973 has been inserted in an international Studbook for protecting it and spread the breeding in captivity. After 1990 they have started also a specific programme EEP (European Endangered species Programme). The EEP are the most intensive types of management, who interest particularly rare species, realized in zoological parks having the requirements for hosting these rare species. Both programmes (Studbook and EEP) for the Somali wild ass are coordinated by the Tierpark of Berlin, Germany. By the end of 2002, 114 specimens were bred and officially registered in 26 different hosting institutions. Other specimens are kept in captivity, especially American zoos. The breeding of the Somali wild ass in protected structures has been an important step towards the safeguard of the species; the number of specimens must be however urgently increased in order to have a greater guarantee of survival of the species. 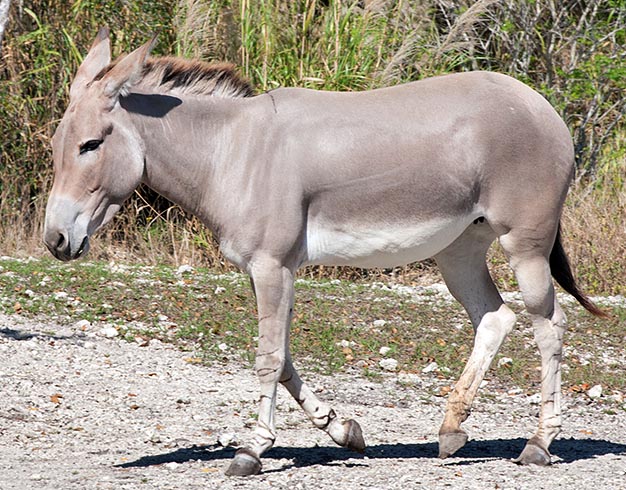 This wild ass has shape, size and colour rather similar, in a gross comparison, to those of many domestic asses but with characteristic black marks-striae which render it more elegant. The mantle is formed by short and smooth hair with a velvety look. The colour is pale grey with yellowish hues and with very pale reddish reflections in the dorsal-lateral part of the body. This colour dissolves and turns white in the lower part (grass-snake belly).

The background colour of the legs and the base of the tail are whitish. The mane, not very long, rigid and kept straight, is black in the distal part of the hair (at the base the hairs are pale and then become black in the rest of the distal portions). The tuft of the 30-50 cm long tail is black. Black is also a very thin line that seems drawn by a nib with Indian ink, which goes along the back of the animal (mule line) from the mane to the tail and which is slightly thicker at the level of the withers.

At times, is present a hint of thin black transversal line (hint of cross) at the level of the shoulders, which has nothing to do with the crossed mule line (a second line crossing the mule line starting from the withers and going through the shoulder) typical of many mantles of domestic ass but which, most probably, they have inherited from the extinct nominal species where such cross was markedly present. In the Somali wild ass, on the contrary, this transversal mark, when present, is very thin, short and does not always unite with the dorsal line having the look of a mark of whip but black (incomplete or hinted crossed mule line).

The ears are big and well bordered of black. The muzzle has the zone of the lips and of the nostrils dark and is white tan. Two white elongated spots follow the mandibular branches. Also the periocular zone is paler. The peculiar characteristic of this species are some irregular stripes, also in the horizontal-inclined disposition, of black colour and placed in the two distal thirds of the legs.

Overall, these black lines create a localized zebra pattern of this side. Let’s hope that the elegant and sparse zebra pattern of the Somali African ass does not have to disappear forever as have disappeared the equally stylish zebra drawings of the “cousin” Quagga (Equus quagga) and of the Thylacine (Thylacinus cynocephalus). The hooves of the Somali wild ass are thin, small and hard; typical of an animal of arid-desert zones, they have roughly the same diameter of the legs. The adult Somali wild ass is about 2 metres long and a height at the withers of about 1,20-1,50 m. Its weight varies between the little more than 200 and the almost 300 kg. It has big eyes, dark black, bright and watery, expressive and languid. When we look at it, in its eyes we have the feeling of perceiving the principle of the ancestral alliance which has established between wild animal and man leasing to the taming of the first at the service of the second.

The Somali wild ass can digest grasses of very poor nutritional value. For finding the meagre fodder it eats, it can wander about covering vast distances researching new pastures, moving also according to the scarce and poor precipitations scattered on the territories where it lives. It can in fact survive in habitats apparently totally uninhabitable. The digestive system of this species is efficient in extracting the maximum possible quantity of liquids from the food. In extreme cases, the wild asses have been seen watering with brackish or salt water. The Somali wild asses nourish of grasses, leaves, twigs and bark. They are animals with good hearing and big ears which are useful for cooling the body of the animal.

Due to the scarcity of alimentary availability, the Somali wild asses live isolated (but the mother with its own son) or, in any case, partially separate keeping in vocal contact through their loud brays which can be heard some km far away. The vocalizations emitted by these animals help them in keeping a sort of vast contact in the ample spaces of the desert.

The species is more active during the cooler hours of the day, morning and late afternoon, staying at the shade during the warmest hours (close to rocks or hills). In spite of the features, less slender than those of the horse (Equus caballus), it is an agile animal able to run fast (up to 70 km per hour). The pregnancy lasts about one year and the colt, who upon its birth weighs about 25 kg, will stay with the mother for about one year (till the following delivery). The twin gestations are very rare, and, like the other equids, are hard to be terminated. The stallions defend vast territories (even of some tens of square km) which the mark with piles of faeces. The dominant males stay with the receptive females till when the pregnancy has begun.

In any case the defence of the territory is strong and other individuals are not tolerated. The asses, in general, even if being considered as “prey” animals, actually they run away less than the horses. Facing a danger tend to study the situation and reach the point to deal with any enemies kicking with the fore legs as well as with the hind ones or trying to bite the foe (with decidedly strong bites). These behavioural peculiarities are to be kept in mind also with the domestic descendants. The domestic ass is, in fact, a precious animal for the assisted therapy to the persons (pet-therapy or, in this specific case, onotherapy), but not all the specimens are suitable for this activity. Curious asses, expansive, docile, good in socializing and not fearful of other domestic animals of the “predator type” such as the dogs, are more prone to become animals to be utilized in the assisted therapy of persons with problems of various kinds.

The Somali wild ass may live 20 and more years. Due to all what we historically owe to the ass, wild or domestic, the least we can do is to render the Somali wild ass known as much as possible because “by knowing it we shall learn to love it and when loving it, it will be simpler to protect it”.