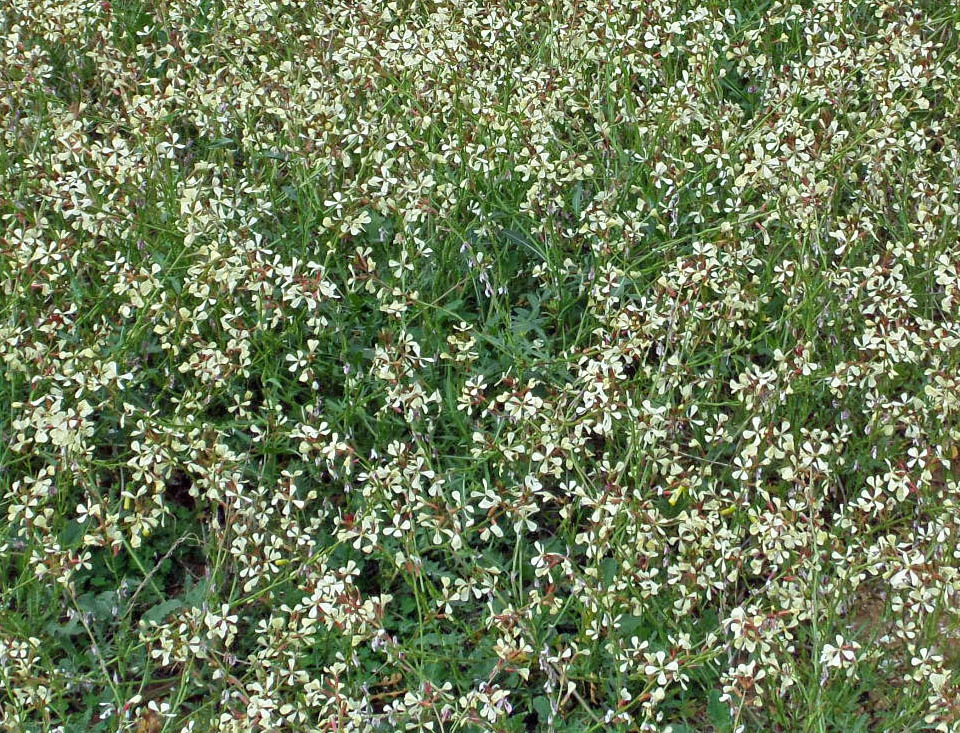 Grown since ancient times for food, Eruca vedicaria is an annual plant nowadays naturalized in many areas of the world and at times infesting © Juan Roro

Eruca vesicaria (L.) Cav. is a species belonging to the tribe Brassiceae, family Brassicaceae, native to the Mediterranean region and to western Asia whose range extends up to Afghanistan, where is a quite common wild plant.

The specific epithet vesicaria comes from vesica, bladder, because the plant was utilized to improve the working of the urinary tract but, after another interpretation, the term hints to its unripe, typically swollen, fruits. 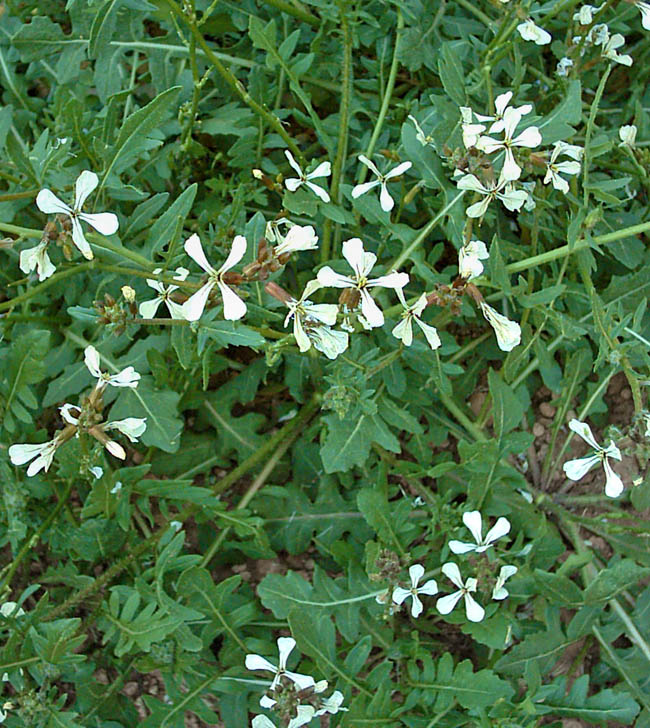 It can be 80 cm tall, with the cross flowers, typical of the Brassicaceae, pollinated by the insects © Juan Roro

It is commonly known as rocket or arugula in English, ruchetta, rucola, rucola comune, ruca in Italian and in French roquette, rokette, eruce, ruce in French.

Eruca vesicaria is an annual plant, glaucous, up to 80 cm tall with taproot root, thin and with rigid stem, provided of simple, more or less bristly, hairs, usually ramified, often reddened in the upper part.

The cauline leaves have lobate lamina like the basal one, progressively reduced and subsessile.

The inflorescence is a raceme that elongates up to 50 cm on fruiting.

The flowers are borne by 2-4 mm peduncles. The calyx is formed by four erect sepals, brown-violaceous and hirsute, 8-10 mm long, oblong, usually persistent, the outer ones are cucullated (hooded) at the base and pointed at the apex. The corolla has 4 white-yellowish, 15-25 mm, patent petals, violet veined, widely obovate-spatulate, narrowed into a long nail. The stamens are 6, tetradynamous (4 longer and 2 shorter).

The pollination is entomophilic. The fruit is a silique (12-25 x 3-5 mm), erect, glabrous or bristly, with an ensiform rostrum, without seeds (aspermous), 7-8 mm long and 4 mm broad. The [2-8(-10) mm] fructiferous pedicels are close to the rachis. The (2 x 1 mm) seeds are biseriate, ellipsoid and slightly flattened, of brown yellow colour.

The rocket is naturalized in many areas of the world and can be found in the fallow lands, in the fields, in the road edges, close to the sea up to high altitudes. It is amply cultivated mainly as a salad plant.

A species morphologically similar, called “wild rocket or sand rocket”, is Diplotaxis tenuifolia (L.) DC., also of the family Brassicaceae, but perennial, with yellow flowers, lower leaves pinnatifid or pinnatisect or pinnato-lobate (2-5 x 10-25 cm), glabrous, with an intense flavour, often utilized in the same way as the rocket. 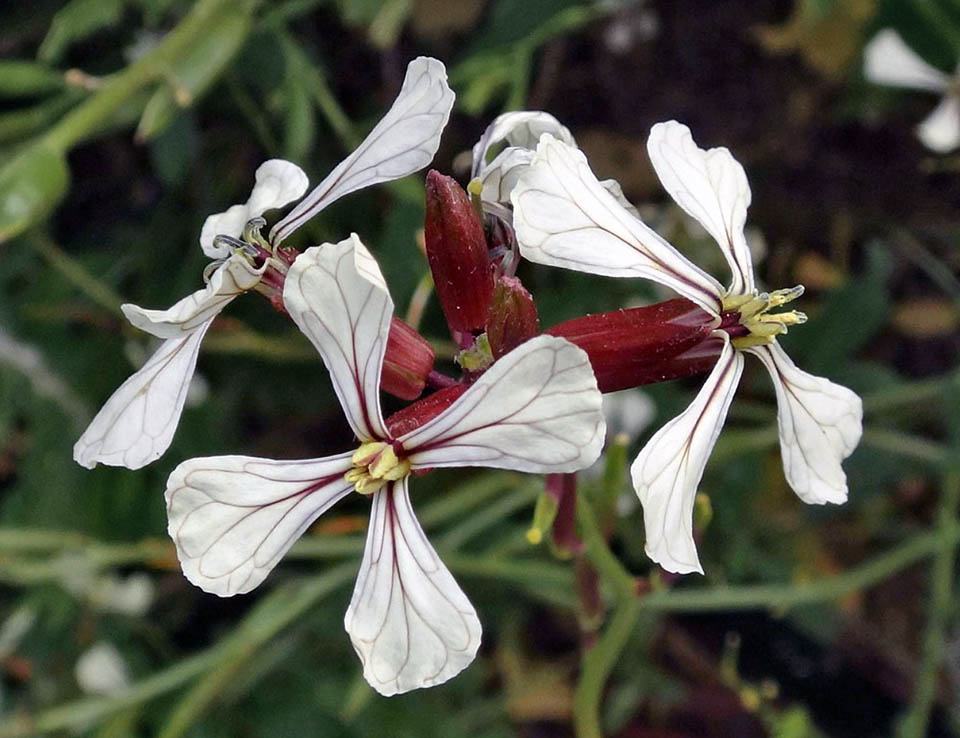 The calyx is formed by 4 erect sepals, brown-violet. The petals are white-yellowish, violet veined, largely obovate-spatulate and narrowed at the base © Arjo Vanderjagt

The chromosomal number of Eruca vesicaria is 2n = 22.

The first cultivation of the rocket dates to the old Greeks. Romans also consumed the seeds. The plant was believed to have magical and aphrodisiac properties. In fact, Publius Vergilius Maro (70 B.C. – 19 B.C.) talks about it in his short poem Moretum where he describes the recipe for preparing a cheese, the Moretum, a very common cheese in the old Rome, whose preparation included, in addition to milk, herbs among which the eruca because this was deemed capable of waking up ‘Venus from the sleep’ (et Venerem revocans eruca morantem).

Ovid in his Ars amatoria suggested the use of this plant, called by him eruca salax or herba salax, that is lustful grass, for better conquering the loved person. Pliny in his Naturalis historia (77 and the 78 A.D.) cites it as food capable of stimulating sexual desire. 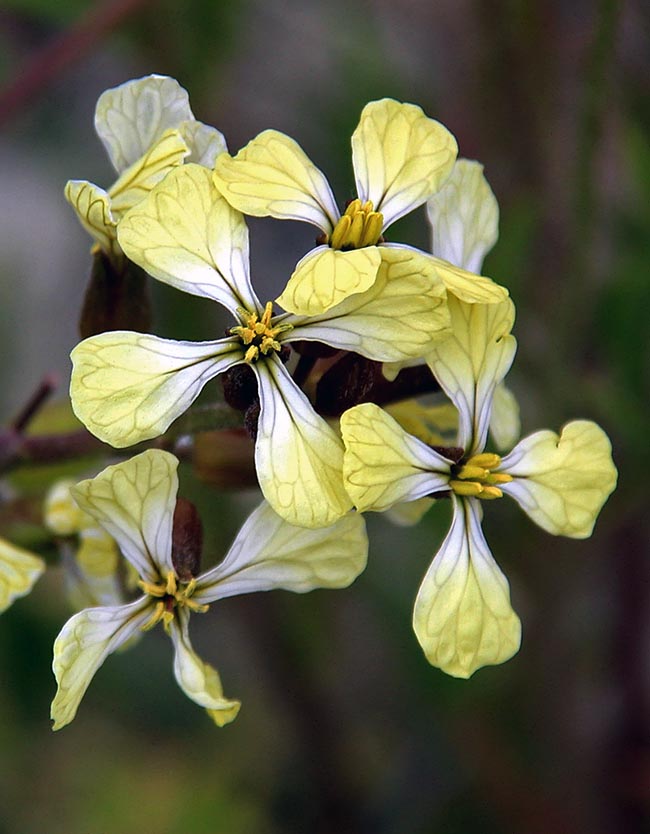 Stamens are 6, not all alike, but tetradynamous, that is 4 long and 2 short © Manuel Martín Vicente

Dioscorides in his De materia medica (I century A.C.) asserted that if eaten raw and abundantly ‘did wake up Venus’.

In his volume Stirpium adversaria nova (1570) Mathias de l’Obel (1538-1616), Flemish botanist, and his travelling companion, Pierre Pena (1535-1620), say that some monks of the monastery of Maguelone, France, did cultivate in the garden of the monastery plants of rocket whose seeds had been brought by a Spanish walking friar.

The rocket is vastly grown in Asia for the oil of seeds (taramira oil) that is utilized for lighting, as lubricant and as paint stripper.

It is also one of the richest sources of erucic acid, monounsaturated omega-9 fatty acid, utilized in the food industry and in the cuisine of some Countries.

In North America it was introduced in 1898 in the County of Flathead, Montana, and later on, in the 1920s, has been reported as an invasive plant of the fields of alfalfa in the USA.

In India it is cultivated for the cooking oil and as food for animals and the cultivations reach the 3500 m of altitude on western Himalaya.

The rocket is characterized by leaves having a pungent flavour and may be consumed fresh, as side dish of many meals, to combine with raw meat (carpaccio) and with raw cheeses (stracchino, primo sale, tomino) to be put on toasts and in the piadinas.

With the chopped leaves, tomato sauce and pecorino, are seasoned the cavatelli (cavatiéddi in dialect), a type of pasta, typical of southern Italy, with the peculiar shape similar to the shells of the genus Cypraea.

The rocket is utilized also for preparing the rocket focaccia, the rocket pizza, the digestive liqueur with rocket, the pesto with rocket and walnuts, the sauce for rocket croutons, etc. It is also employed in the preparation of sweets and in cakes.

On an industrial level, it is used for making the “follow-on baby milk”, adapted to the nutritional needs of the infant. 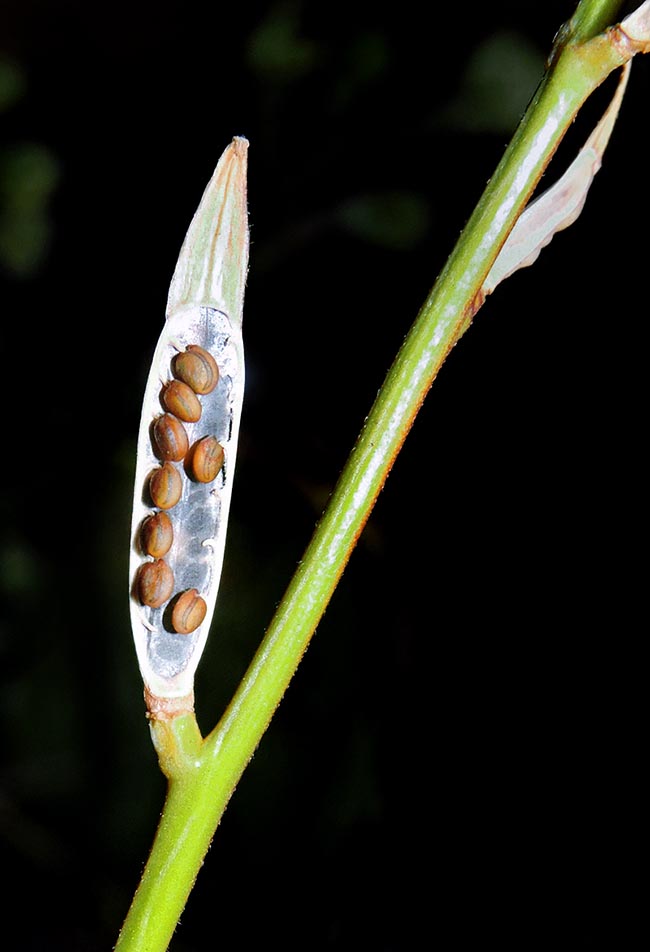 The fruit is an erect silique, glabrous or hispid, with ensiform rostrum, that is with pointed seedless terminal part. These ones, of brown yellow colour, are ellipsoid, slightly flattened and arranged on two rows © Barry Hammel

The oil cake of seeds and the whole plant are utilized as forage for the farm animals.

Also the flowers of rocket, that have a milder taste than the leaves, can be utilized for garnishing salads.

In traditional medicine the young plants are employed for their stimulating, antiscorbutic, stomachic and diuretic properties.

Specific studies have shown that the rocket contains glucosinolates, flavonoids, carotenoids, vitamins, fibres and polyphenols. It also contains magnesium, necessary for the functions of the nervous and muscular systems, and vitamin K, essential for the formation of the bones. Moreover, it stimulates the recovery of the organism in case of asthenia and psychophysical weakness. It can be employed also for disinfecting and healing wounds.

Today’s extensive crops are the outcome of research of improvement in the nutritional properties, of the shelf life and of the resistance of the plant to diseases, drought and saltiness.

The rocket can be utilized also as an agent of biological control. In fact, experimentally, it has been noted that the mucilaginous seeds are a promising agent of biocontrol against the larvae of some mosquitoes of the tropical and subtropical regions such as Culex quinquefasciatus, carrier of numerous viral and parasitic diseases and Aedes aegypti, the mosquito of the yellow fever.

The oil of rocket is effective in protecting the cultivations from harmful insects like Perkinsiella insignis, Sogata striatus, Sogatella longifurcifera, and Peregrinus maidis. Moreover, the glucosinolates extracted from the leaves have a negative effect on the survival and the development of the nymphae, on the length of adult life, on the reproductive period and on the fertility of the aphid Lipaphis erysimi.

Sowing is done from March to September, but, if done in protected cultivation (tunnel), it is possible to extend the production period of the seedlings for almost the whole year.

The germination is fast and the growth is rapid. The seedlings are formed after one week from the sowing and soon after it is possible to collect the first leaves for the various uses.

The seeds of rocket can be conserved for several years without losing their germination capacity. 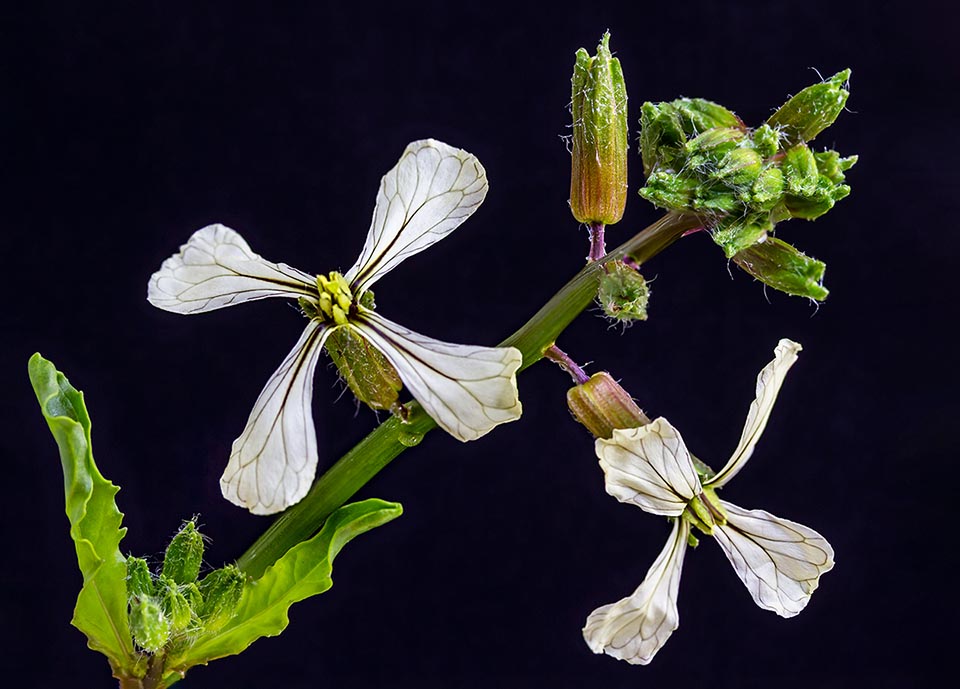 The rocket requires irrigation after sowing until the formation of the seedlings, then, if it does not rain, must be watered often and little without exceeding because the plant does not love too much water. In cultivation it may be subject to various phytopathological alterations caused by pathogens. The too high density of sowing together with the too close production cycles cause the development of the tracheo-fusariosis caused by Fusarium oxysporum. 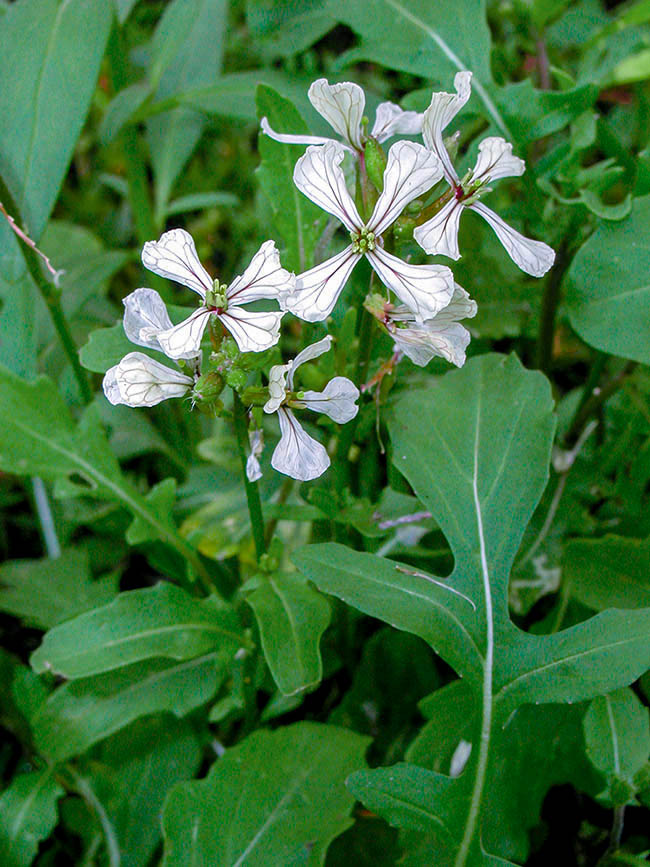 Eruca sativa subsp. sativa is the cultivated form, typical of the Mediterranean area, very likely the centre of its domestication. It differs from the species due to the glabrous or hairy sepals, deciduous, usually not cucullate. It’s the most diffused and cultivated rocket in the world for food use and several medicinal virtues © Giuseppe Mazza

Finally, the rocket may accumulate toxic elements such as the petals Nickel, Lead and Zinc being very tolerant.

Eruca vesicaria subsp. sativa (Mill.) Thell., typical to the Mediterranean area, very likely centre of its domestication, differs from the species for the glabrous or hairy sepals, deciduous, usually not cucullate. This is the most diffused and cultivated rocket in many parts of the world.