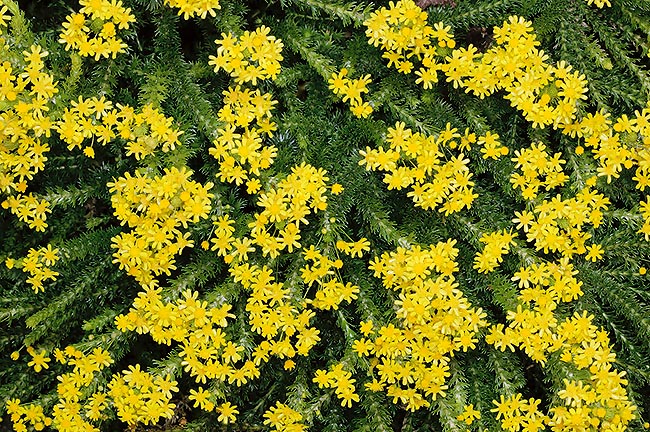 The plant is native to South Africa (Western and Eastern Cape), where it grows along the coasts as well as in the hinterland, up to 1.200 m of altitude, on sandy soils or on calcareous rocks.

The name of the genus is the combination of the Greek words “eurys” = ample and “ops” = look, with reference to the abundant blooming, after some, to the size of the single flower, after others; the name of the species is the Latin word “virgineous” = virginal, chaste, of not clear reference.

It has cylindrical stems with alternate close leaves, sessile (without petiole), palmate-lobate with 3 to 7 lobes, of dark green colour, 0,5-1,5 cm long and 0,3-0,8 cm broad. The solitary inflorescence, axillar, with a diameter of 0,7-1 cm , are the typical flower heads of the Asteraceae, formed by a host of sessile flowers spirally inserted on a roundish base, the receptacle, surrounded by an involucre formed by 5-8 linear bracts, pointed and united at the base. The flowers of the outer ring, called ray florets, usually 8, have the oblanceolate corolla formed by five petals united together and of a bright yellow colour. 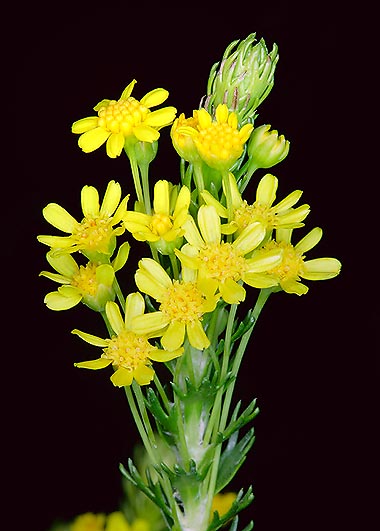 The ray florets are female, but do have mainly the function of attracting the attention of the pollinator, like the petals of a single flower. Inside the ring, are located the bisexual flowers, calle disk florets, with tubular corolla with five yellow lobes.

The fruits, containing one seed only and called achenes (or, more correctly, cypselae) in the Asteraceae, are oblong, yellow of pale brown, 2-2,5 mm long, surmounted by the pappus, the modified calyx of the flower, which has the function to help their dispersion, formed by a short tuft of white hairs.

It reproduces by seed and, very easily, by cutting in summer, in sand or agri-perlite, which roots in 2-3 weeks.

Plant of easy cultivation and of very fast growth, which in winter-spring covers of a multitude of small flowers with a bright colour and a slight scent of honey, so much to almost hide completely the green part. It is particularly suitable for the Mediterranean climates, best for hedges, back borders, isolated specimen or in the rocky gardens, in full sun or in very slight shade; useful, for its fast growth, in new gardens, for filling up the empty spaces.

It is not particularly demanding about soil, provided the same is well drained; in summer the watering must be regular, but spaced, in such a way to dry up the soil, and once well rooted, it may bear drought periods.

It resists to the wind and to the saline aerosols, it may be employed, therefore, close to the sea, and, moderately, at low temperatures, as low as -8/-10 °C.

Time passing, it tends to widen in a rather messy way, and to loose the leaves close to the base, drastic pruning are consequently necessary in spring, after the blooming, for the renewal, and in autumn for a more compact form.