The great family of leguminous. With 700 genus and 17.000 species the leguminous are one of the most important botanic families. Spectacular flowers. Curiosities. Herbs, shrubs, and trees useful for mankind. They enrich the soil. Kind to marriage makers. 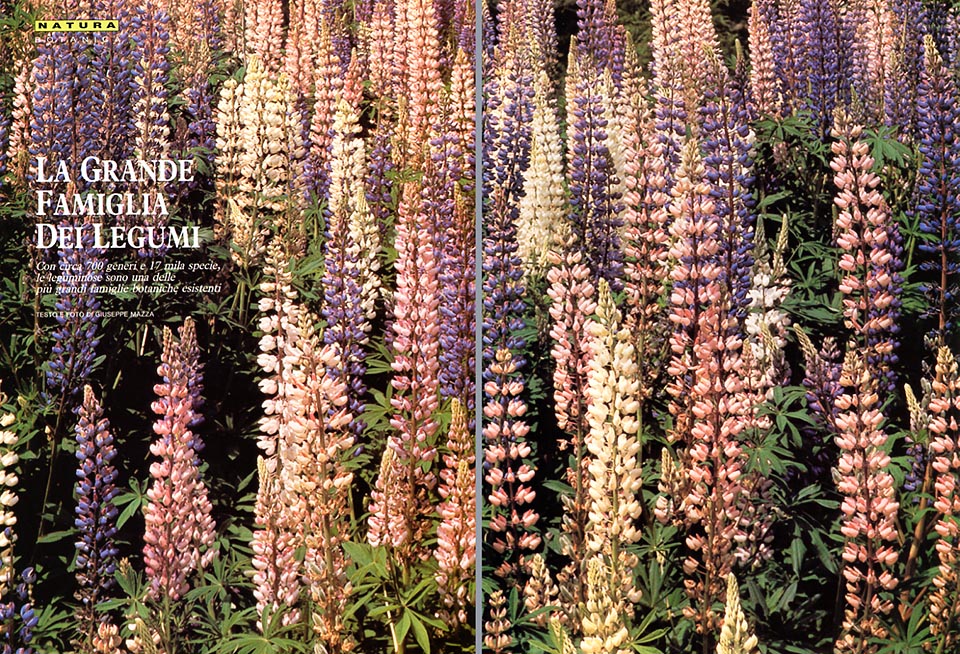 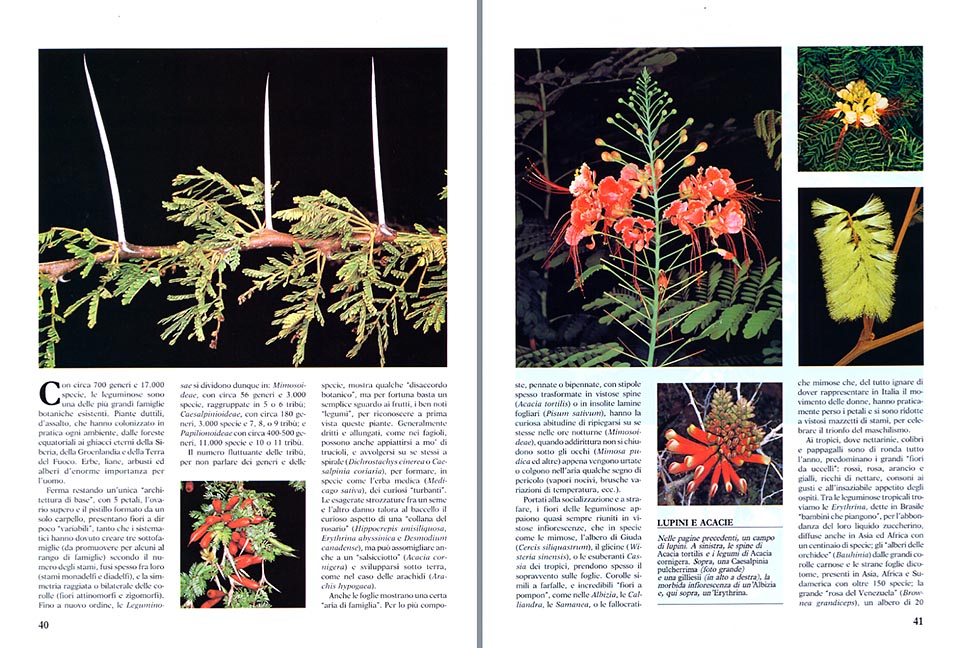 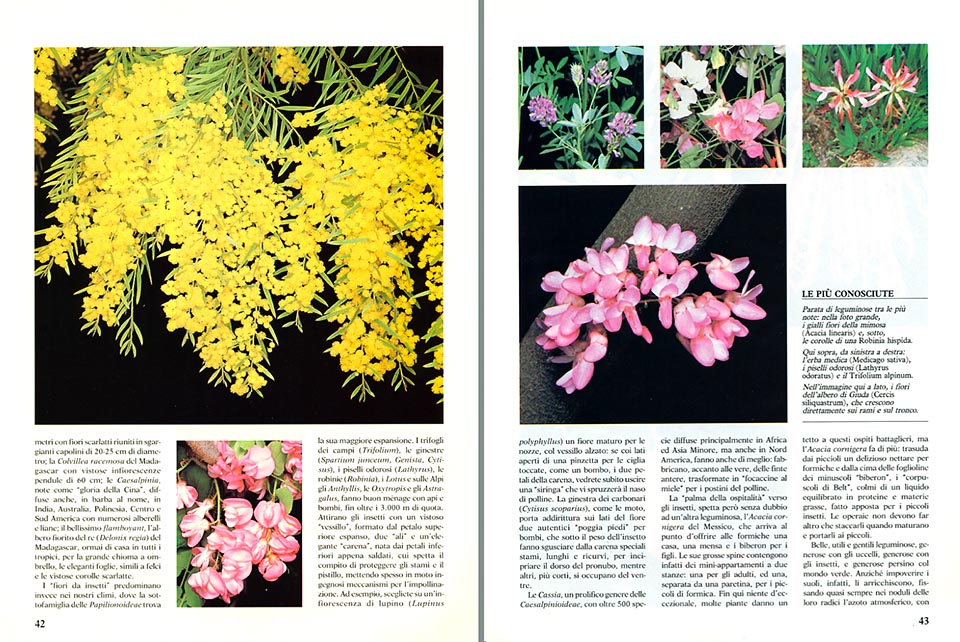 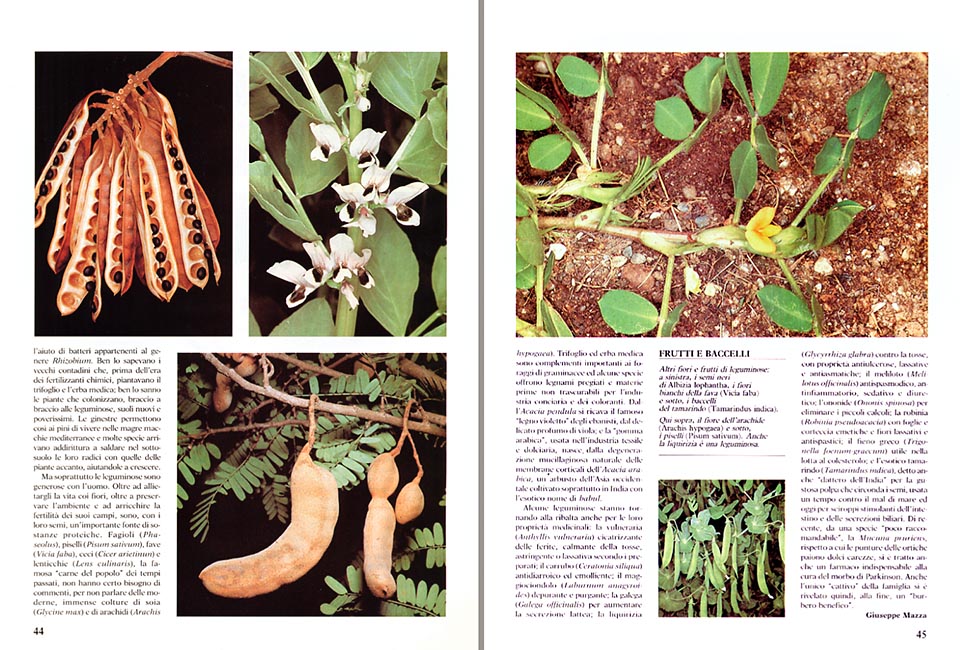 With about 700 genera and 17.000 species, the Fabaceae are one of the largest existing botanical families.

Pliable plants, pugnacious, which have colonized, practically, all habitats, from the equatorial forests to the perennial ices of Siberia, Greenland and the Tierra del Fuego. Grasses, lianas, shrubs, and trees, of enormous importance for the humans.

While keeping a unique “basic architecture”, with five petals, the ovary on the top, and the pistil formed of a sole carpel, they present “variable”, to say the least, flowers, so much that the systematists have been obliged to create three large sub families (to be promoted, after somebody, to the rank of families), depending on the number of stamens, often melted between them (monadelphous and diadelphous stamens), and the symmetry, either radial or bilateral of the corollas (flowers actinomorphous and zygomorphous).

The fluctuating number of the tribes, not to talk about the genera and the tribes, evidences some “botanical disputes”, but, luckily, it suffices a simple look to the fruits, the well known “legumes”, to identify, at sight, these plants.

Generally straight and prolonged, as for the beans, they can even flatten like shavings, and wind round themselves (Dichrostachys cinerea or Caesalpinia coriaria), to form, in species such as the Alfalfa (Medicago sativa), some odd “turbans”.

The exaggerated narrowing between the seeds, give sometimes to the pod the unusual appearance of a “rosary” (Hippocrepis unisiliquosa, Erythrina abyssinica, and Desmodium canadense), but can even resemble to a “sausage” (Acacia cornigera), and develop under the ground, as in the case of the groundnuts (Arachis hypogaea).

Also the leaves show a sort of “familiar look”. Mostly composed, pinnate or bipinnate, with stipules often transformed in showy thorns (Acacia tortilis), or in unusual foliar laminae (Pisum sativum), they have the odd habit to bend on themselves during the night time (Mimosoideae), when even they shut themselves up, under our eyes (Mimosa pudica, and others), as soon as touched or when they intercept in the air some sign of danger (harmful vapours, abrupt changes in temperature, etc.).

Prone to socialize and to overdo, the flowers of the Fabaceae look almost always united in showy inflorescences, which, in species like the mimosas, the Judas tree (Cercis siliquastrum), the Wisteria (Wisteria sinensis), or the exuberant Cassia of the Tropics, often get the upper hand over the leaves.

Corollas similar to butterflies, and incredible “pompon flowers”, such as the Albizias, Calliandras, Samans, or the phallicist Mimosas (Acacia spp.), which, absolutely unaware of representing, in Italy, the women action, have practically lost the petals, and have reduced to showy small bunches of stamens, to celebrate the triumph of the male chauvinism.

At the Tropics, where nectarinias, humming birds, and parrots g o around all the year, prevail the large “bird flowers”: red, pink, orange and yellow, rich of nectar, consistent with the tastes and the insatiable appetite of the guests.

The Erythrina, called in Brazil “Crying children”, due to the abundance of their sugary liquid, spread also in Asia and Africa, with about a hundred of species; the “Orchid trees” (Bauhinia spp.), with the big flshy corollas ans the strange dichotomous leaves, present in Asia, Africa and South America, with more than 150 species; the huge “Rose of Venezuela” (Brownea grandiceps), a 20 metres tall tree, with scarlet flowers united in garish heads of 20-25 cm of diameter; the Colvillea racemosa of Madagascar, with showy 60 cm pendulous inflorescences; the Caesalpinia, known as “Glory of China”, spread also, in spite of the name, in India, Australia, Polynesia, Central and South America, with very nice saplings and lianas; the much beautiful “Flamboyant”, the Royal Poinciana (Delonix regia) of Madagascar, now at home in all the Tropics, for the wide umbrella-like foliage, the elegant leaves, similar to ferns, and the showy scarlet corollas.

The “insect flowers” prevail, on the contrary, in our climates, where the sub-family of the Papilionoideae has its greatest expansion.

The clovers (Trifolium spp.), the brooms (Spartium junceum, Genista, Cytisus), the sweet peas (Lathyrus spp.); the Robinas (Robinia spp.), the Lotus, and in the Alps, the Anthyllis, the Oxytropis, and the Astragalus, have a good menage with bees ans bumble-bees, till over 3.000 metres of altitude.

They attract them with a showy “flag”, formed by the upper extended petal, two “wings”, and an elegant “hull”, born from the just joined lower petals, which have the duty of protecting the stamens and the pistil, often starting ingenious mechansims for the pollination.

Choose on an inflorescence of Lupine (Lupinus polyphyllus) a flower ripe for the wedding, with the flag raised up. If, with the open sides of the tweezers for eyelashes, you touch, as a bumble-bee would do, the two petals of the hull, you will see at once a “syringe” coming out and this will spray your nose of pollen.

The Common broom (Cytisus scoparius), like motor-bikes, even carries, on the sides of the flower, two authentic “footrests” for bumble-bees, which, under the weight of the insect, get some special stamens, long and bent, to come out from the hull, in order to powder the back of the pollinator, while other ones, shorter, take care of its abdomen.

The Cassia, a prolific genus of the Caesalpinoideae, with more than 500 species distributed especially in Africa and Asia minor, but also in North America, do something even better: they fabricate, close to the true ones, some “false anthers”, transformed in “small honey cakes”, for the “postmen of the pollen”.

But the “first prize of the hospitality” towards the insects, goes, without any doubt, to another fabaceae, the Acacia cornigera of Mexico, which reaches the point of offering the ants a house, a table, and the feeding-bottle for the kids.

Its big thorns contain, in fact, some two-rooms mini flats: one for the adults, and one, separated by a small wall, for the baby ants.

So far, nothing exceptional, many plants offer a shelter to these pugnacious guests, but the Acacia cornigera, not yet satisfied, makes something more: it exudes through the petioles a delicious nectar for ants, and, from the top of the small leaves, some small “feeding-bottles”, the “corpuscles of Belt”, full of a liquid well balanced in proteins and fat matters, done specially for the babies.

The worker-ants have just to take them off, when ripe, and give to the babies.

Rather than impoverishing the soils, in fact, they enrich them, fixing almost always in the nodules of their roots the atmospheric nitrogen, with the help of bacteria belonging to the genus Rhizobium. This was well known by the old countrymen who, before the time of the chemical fertilizers, were practising the green manure with clover and alfalfa; and it is well known by the plants which colonize, arm-in-arm with the fabaceae, new and very poor soils!

The brooms, in this way, allow the pines to live in the poor Mediterranean garrigues, and many species even manage to join, in the underground, their roots with those of the nearby plants, helping them in growing up.

Inexplicable unselfishness in the Darwinian theory, proving that beyond the struggle for life, in the wild do exist also admirable instances of sociality and cooperation.

But, above all, the Fabaceae are generous with the humans.

Apart from gladdening their life with the flowers, and preserving the habitat and enriching the fertility of their fields, they are, with their seeds, an important source of proteins.

Beans (Phasoleus spp.), Peas (Pisum sativum), Broad beans (Vicia faba), Chickpeas (Cicer aretinum), Lentils (Lens culinaris), the famous “meat of the people”, of old times, do not need by sure any comments, not to talk of the modern, immense cultivations of Soybeans (Glycine max), and of Groundnuts (Arachis hypogaea).

Clover and Alfalfa are important complements of the forages of graminae, and some species offer valued timbers and important raw materials for the tanning and the dye industries.

From the Acacia pendula, they get the famous “violet wood”, of the carpenters, with the delicate scent of violet; and the “gum arabic”, utilized in the textile and the confectionery industries, comes from the mucilagenous natural degeneration of the cortical membranes of the Acacia arabica, a shrub of western Asia, cultivated mainly in India, under the exotic name of “Babul”.

Some Fabaceae are returning to public life also for their medicinal properties: the Woundwort (Anthyllis vulneraria), for healing the wounds, sedating the cough, astringent or laxative, depending on the preparations; the Carob (Ceratonia siliqua), anti-diarrhoeic and emollient; the Laburnum (Laburnum anagyroides), chologogue and purgative; the Goat’s rue (Galega officinalis), to increase the milk secretion; the Licorice (Glycyrrhiza glabra), against cough, with anti-ulcerous, laxative and anti-asthmatic properties; the Melilot (Melilotus officinalis), anti-spasmodic, anti-inflammatory, sedative and diuretic; the Ononis (Ononis spinosa), to eliminate small calculi; the Locust-tree (Robinia pseudoacacia), with emetic leaves and bark, and laxative and anti-spastic flowers; the Fenugreek (Trigonella foenum-graecum), useful for fighting cholesterol; and the exotic Tamarind (Tamarindus indica), called also “Indian date”, for the tasty pulp which surrounds its seeds, used time ago against sea-sickness, and nowadays, for syrups stimulating the intestine and biliary secretions.

Recently, from an “unreliable” species, the Mucuna pruriens, in comparison of which the stings of the nettles appear gentle caresses, they have obtained an indispensable drug for treating the Parkinson disease. Also the only “bad” specimen of the family, has shown, therefore, at the end, to be a “rough diamond”.