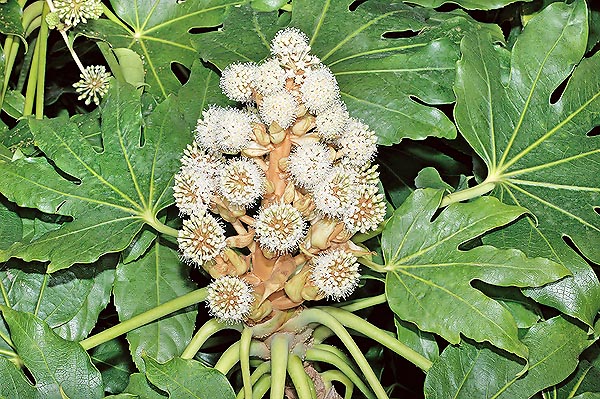 The Fatsia japonica (Thunb.) Decne. & Planch. (1854) is native to the coastal humid forests of Korea, Japan, and Ryukyu Islands (Nansei-shoto).

The name of the genus comes from its Japanese name “fatsi”; the Latin name of the species, “japonica” = of Japan, indicates its place of origin.

Evergreen shrub, tall up to about 4 m, has palmate-lobate leaves, with 7-9 ovate-oblong lobes with the margins slightly indented, of a glossy dark green colour, of 15-40 cm of diameter, on petioles long even 50 cm.

The inflorescences, produced in autumn, are terminal, panicle shaped, 30-50 cm tall, with cream-white flowers assembled in umbrellas of 3-4 cm of diameter; the fruits are globose, with a diameter of about 6 mm, and a green colour, tending to black when ripe. It reproduces by seed, which is to be interred quickly to germinate, as it has a short lasting germination time, by semi-woody cutting, air layering and by suckers emitted at the base of the plant.

Plant of easy cultivation, due to its versatility and fast growth, it can be cultivated in open spaces in an ample variety of soils, even if it prefers the organic, sandy and somewhat acidic ones, and in situations of full or partly shade, in any case away from the direct sun, especially during the central hours of the day, which can harm the leaves; to be preferably placed in locations sheltered from the strong winds. Furthermore, it has a remarkable resistance to low temperatures, as it can resist, for short periods, till about -10 °C, and a few grades less, even if losing the aerial part, if well mulched, also if it tends to lose the leaves already at temperatures around the -5 °C. It bears pruning well, even if drastic and year after year, to be done in spring, in order to maintain compact its standing and limited its dimensions.

When cultivated in pot, it is a plant appreciated for indoor decoration, where, nevertheless, it does not bear the dry heath of the warmed flats, but prefers luminous and cool locations and this is to be kept in mind when positioning it. Watering must be regular during the vegetative time, reduced, from late autumn till winter ending. The leaves are often utilized in floral compositions. In Japan, it is traditionally placed in the northern side of the house, to protect the same from the evil spirits.