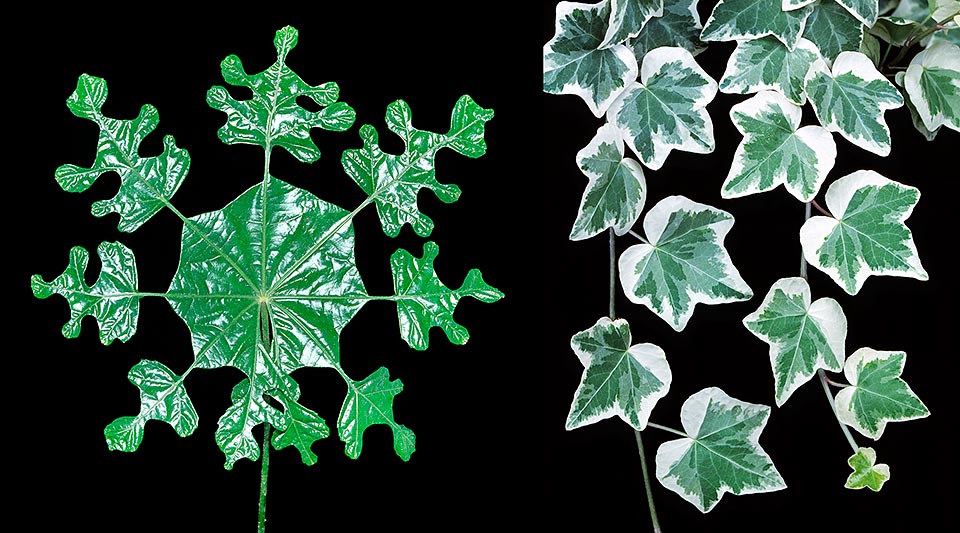 Araliaceae usually have very ornamental leaves. On the left we find Trevesia palmata, similar to a snowflake. On the right, a variant of Hedera helix © Giuseppe Mazza

Closely related to [Apiaceae, Araliaceae is a family of flowering plants spread especially through subtropical and warm regions, being plentiful in tropical America and Indomalayan region.

They are perennial plants, predominantly woody, although in temperate regions we can find herbaceous species, such as the famous Common ivy (Hedera helix), a climbing plant with two types of leaves native from the most humid zones of the Central European forests, and frequently found in gardens.

They can reach various heights, from the smallest ginseng (Panax ginseng) 3 m high, to the ivy, which can climb up to many tens of metres high clambering over the trunk of a tree.

Like all the families in the order Apiales, they might contain schizogenous secretory canals (formed through cellular breakage) that spill essential oils, many of which are toxic, such as in Schefflera actinophylla a strategy in order to avoid the herbivorism.

That species, which comes from the tropical rainforests of Australia and Papua New Guinea, is dispersed by birds and often grows over other plants. It is frequently found in gardens because of its racemose inflorescences that can be 2 m long, which then will develop into a very beautiful and ornamental first red and then black berries, and is now catalogued as an invasive plant in some states of the USA.

Equally well-known is Schefflera venulosa named after the outstanding central nerves of its leaves, and Schefflera arborícola, with yellow and orange berries, which can be found on its many variants in many plant nurseries along the world.

Nevertheless, this family shows other uses of interest for the human besides ornamental ones, such as medicinal uses, like ginseng, whose root has been used since ancient times in China because of its revitalizing properties, as well as the genus Cussonia, large trees found in the African savannahs which have also been attributed medicinal properties. For instance, compounds used to fight malaria and indigestions are extracted from the leaves of Cussonia spicata.

Schefflera actinophylla and Hedera helix. In both the fruit is a berry and is dispersed by birds © Giuseppe Mazza

The genus Hydrocotyle is taxonomically argued because of its resemblance to the family Apiaceae, and even some authors (Thorne, 1992) have included it in a new family, Hydrocotylaceae, a theory that has been reinforced lately thanks to the progresses in molecular biology. In fact, the phylogenetic relationships between Apiaceae and Araliaceae are poorly established even today.

Their inflorescences usually are panicles, which can be compound, for example, spikes in a panicle (like those in Cussonia paniculata and Cussonia spicata) or umbels in a panicle (in Hedera helix and Fatsia japonica). The flowers, with petals sometimes short-lived, are generally bisexual, actinomorphic, with 5 stamens, and gynoecium with 5 (sometimes 2) carpels, and they derive in a berry-type fruit.

Some species, like Meryta denhamii, are dioichous, that is to say, each individual contains only male or only female flowers.

In the trees the leaves are usually quite large, palmately or pinnately compound, or even simple, with lobular or palmate shape, and a shiny aspect, able to take the most strange forms, as in the case of Trevesia palmate, whose leaves remind of “snowflakes” or “goose feet”.

The margins of the leaves might be dentate, like in [Polyscias balfouriana, very requested in gardening too.

Araliaceae was last modified: May 18th, 2018 by Giuseppe Mazza
error: Content is protected !!