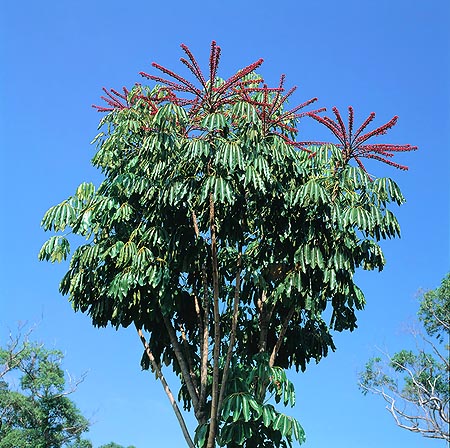 The Schefflera actinophylla (Endl.) Harms (1894) is native to Australia (Queensland and Northern Territory) and Papua New Guinea, where it grows in the pluvial forests, at times as epiphyte.

The genus is honoured to the German botanist Jacob Christoph Scheffler († 1742); the name of the species is the combination of the Greek words “aktis, aktinos” = beam, ray, and “phyllon” = leaf, with clear reference to the shape of the leaf.

Evergreen tree, growing to about 12 m tall, with long branches usually departing from the bottom, with an almost vertical tendency, which end with a crown of intense glossy green leaves sustained by petioles long up to 60 cm; the leaves are palmate-compound, with 6-14 oblong-obovate leaflets, 10-30 cm long, and 8-12 cm broad.

The inflorescences are terminal panicles, with peduncles, partly almost horizontal, of a dark purple colour, 40-80 cm long, which diffuse from the central axis and on which are distributed compact clusters, of about 2 cm of diameter, of scarlet flowers, about 6-8 mm of diameter each.

The fruits are globose, of about 8 mm of diameter, purple tending to black when ripe, and contain one seed only. It easily reproduces by seed, cutting and air layering. Plant of great ornamental value, both due to its foliage and to its showy inflorescences overhanging the crown, amply cultivated in tropical and subtropical climate zones, and, at times, even in the warm temperate ones, as it bears temperatures down to -3/-4°C for a short time. It likes better a full sun exposition, and deep, draining soils, kept humid, but it adapts to partly shaded positions, even if in such case it seldom blossoms, and to different soil situations. 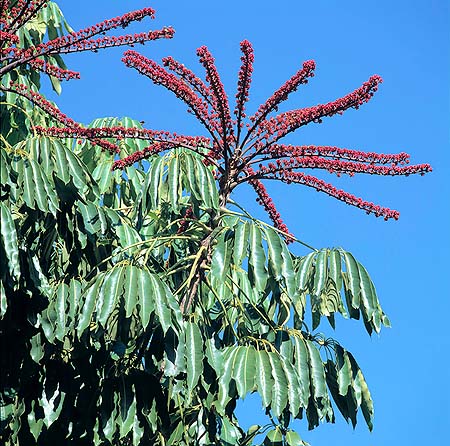 Its diffusion is, nevertheless, not devoid of disadvantages, the plant having a very aggressive rooting apparatus, it must be, therefore, planted far away from walls, enclosures, sewer pipes, etc. , and, most important problem, it easily spreads thanks to several species of birds which eat its fruits, so much to be considered, in many places, as a pest, and therefore its cultivation is advised against, as it is able to colonize wide zones in short time and in an exclusive manner.

As a plant in pot, it is also very common for indoor decoration, due to its facility of cultivation, as it adapts to various light conditions, from shade to direct sun, even if a strong luminosity contributes to avoid the early fall of the lowest leaves, and for its rather slow growth, which permits to contain the dimensions for long time; it is good that the temperatures keep over 14°C, better around 20-24°C.

Watering must be regular in summer, reduced in winter, allowing the loam to dry up partly between the watering, and the local humidity rather high, if necessary increased with nebulisations when in presence of dry air and high temperatures, utilizing water at local temperature and not calcareous, in order to avoid un-aesthetic spots on the leaves.

The leaves and the other parts of the plant contain toxic substances, in particular, calcium oxalate, which can cause contact dermatitis, and reactions if chewed and ingested.