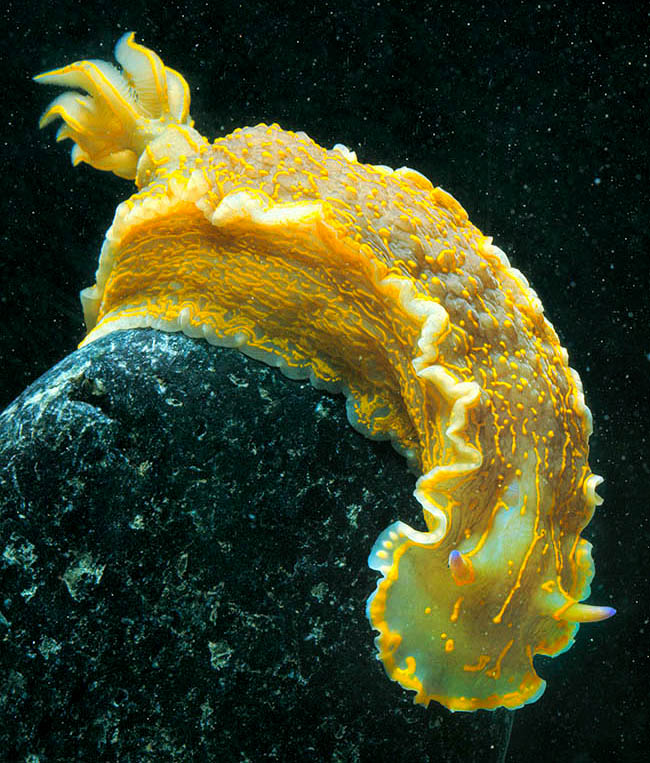 Felimare picta Philippi, 1836 is a gastropod known also with the name of Giant dorid or Regal sea goddess.

It belongs to the order Nudibranchia, a group characterized by the absence of the outer shell, not protected or absent gills and by bright colours that, together with the odd morphology of the various species, earned it the epithet of “sea rainbows”.

The family Chromodoridida, to which the Giant dorid belongs, is also one of the largest and coloured families that populate the seas of all the world, enclosing 35 genera.

The name of the genus Felimare has replaced only recently that of Hypselodoris and comes from the Latin from the Latin “felis” = cat and mare = sea, that is, “sea cat”.

It is thought that the origin of this name is to be researched more in the bizarre denominations created by the Brazilian malacologists Eveline and Ernst Marcus than to an identifiable morphological meaning.

The etymology of the species picta comes from the Latin pictus = painted, coloured, whilst the common name is inspired by the Suborder Doridina and by the remarkable size reached by this species.

The coloration of the Giant dorid may considerably vary from one specimen and another, from a geographical area and another and between young specimens and adults.

Therefore several Authors have proposed the division of this group into various subspecies, making evident once again the enormous difficulty in classifying the gastropods and the mollusks in general.

Felimare picta has a vast distribution through all the Mediterranean Basin, the tropical and subtropical Atlantic Ocean, including the Cape Verde archipelago, the Canary Islands, Madeira Island and the Açores. It can be even found in the Gulf of Mexico as proof of the extraordinary expansion of the family Chromodorididae. 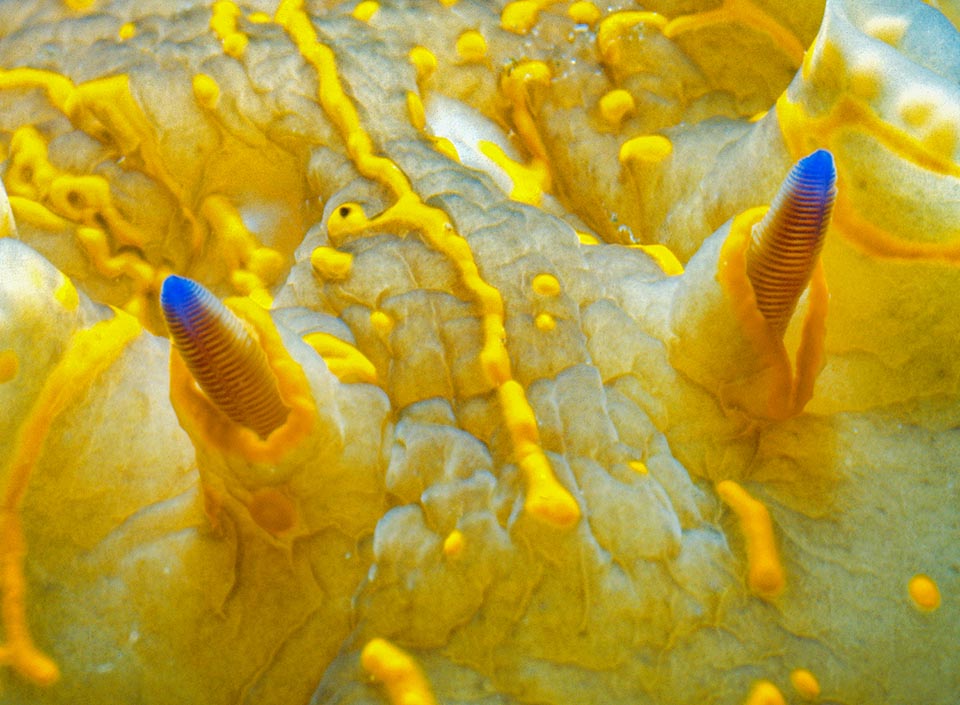 The small head horns are sensorial appendages called rhinophores. In case of danger, they can be rapidly retracted in their protective pockets © Giuseppe Mazza

In fact, it is believed that the capacity of crossing with success the different Atlantic biogeographic barriers is related to the distinct evolutionary history of this group.

Felimare picta is a benthic animal that may be found on bottoms quite different from each other, such as clastic or rocky bottoms, on the prairies of oceanic Posidonia or even inside shipwrecks, reaching a maximum depth of 60 M. Like all nudibranchs it is carnivorous, with a digestive and enzymatic system that has adapted to animal rather than plant food. 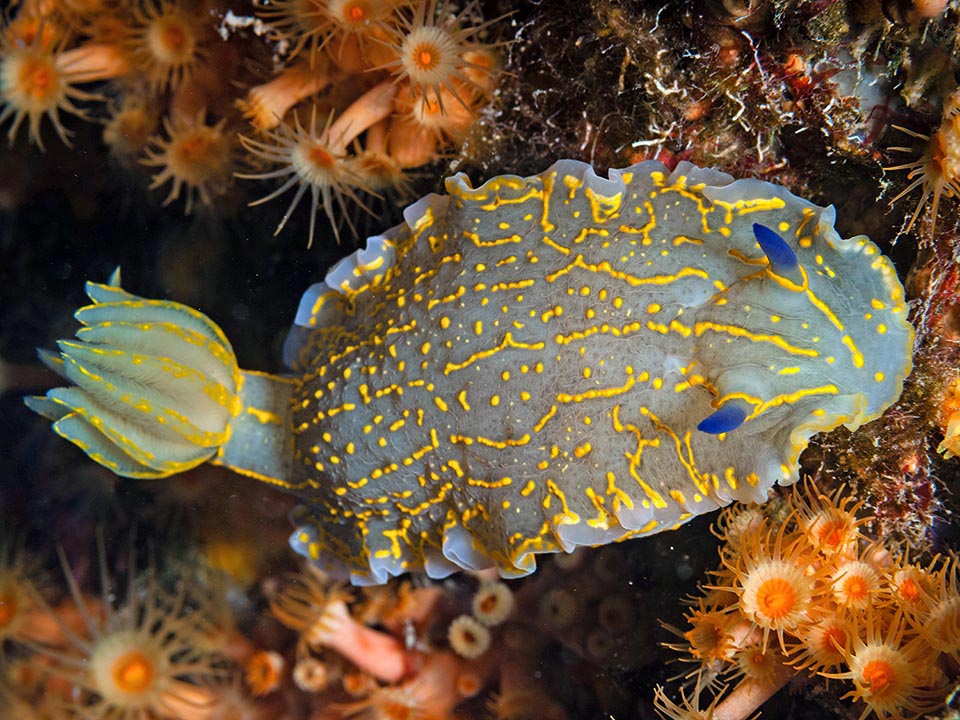 It cannot be said that they are eyes, but not by chance they have the same position on the head and analyzing water they also collect valuable information for the social life of the species, for finding food and escaping predators. On the opposite side, by the tail, within note an elegant and showy plume, also retractile © Roberto Boero

It is particularly greedy of sponges of the genus Sarcotragus that grazes crawling and scraping the substratum with its specialized rasping tongue called radula. Occasionally it is possible to meet it also in clastic environments while looking for the sponge Dysidea fragilis.

Felimare picta  is the largest dorid in the Mediterranean with a length that may reach 20 cm, even if it is much more common to find it with a length of 10-15 cm. 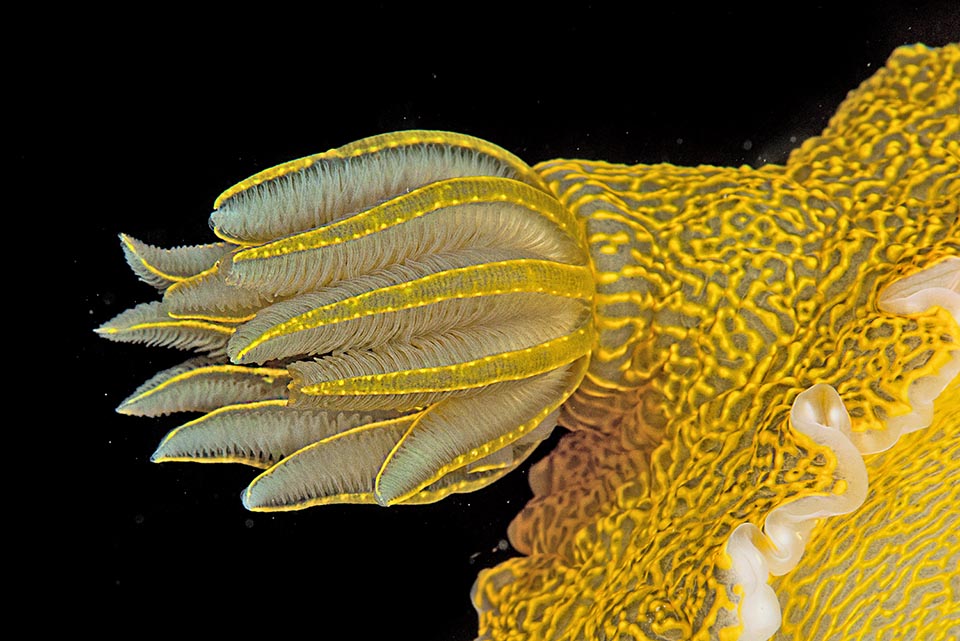 It serves to divert the predator’s attention, directing them to less vital parts of the body, but above all serves to breath, with 11 branchial sheets © Corrado Carozzino

The colouring of the mantle is dark blue, almost black tending to purplish, crossed by a series of spots, dots or thin lines that run along the entire head of a dull bright yellow colour.

The colour of the livery changes with the growth: the young specimens present three yellow and well marked dorsal longitudinal lines, with the edge of the mantle white, of irregular width and wavy.

With the advancing age these lines fragment and increase in number, forming irregular circles that can slowly fade or even disappear in the oldest specimens, usually discoloured and of a pale blue colour. 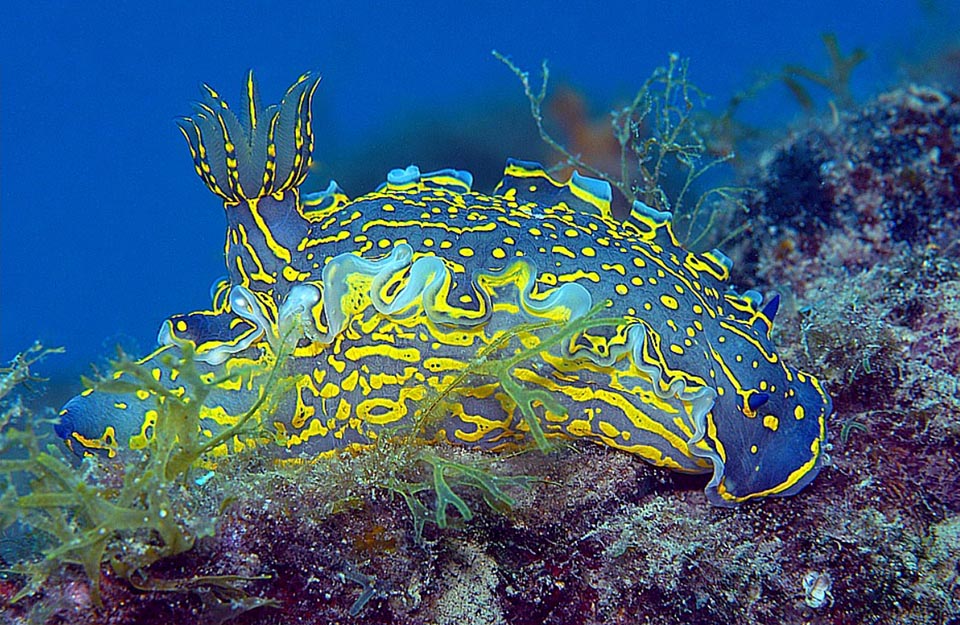 It’s a distinctive element in classifying nudibranchs, and towering over among showy colours reminds evil-minded a possible presence of poisons © Josep Lluis Peralta

The head is characterized by two well visible bluish horns called rhinophores, tactile and chemosensitive, suitable for detecting the movements of the water and the suspended particles, that may be withdrawn in a special dermic pocket when a danger is sensed.

The back of the Giant dorid, smooth and without shell, is a distinctive characteristic of the nudibranchs, as well as it is distinctive in some species the imposing plume that overlooks the caudal portion. Composed by eleven branchial sheets, each one marked by a thin inner yellow line and an ampler hatched line on the outer side, the branchial plume carries on a breathing  function and, like the rhinophores, can retract in a dermic sheath in order to protect from possible attacks. 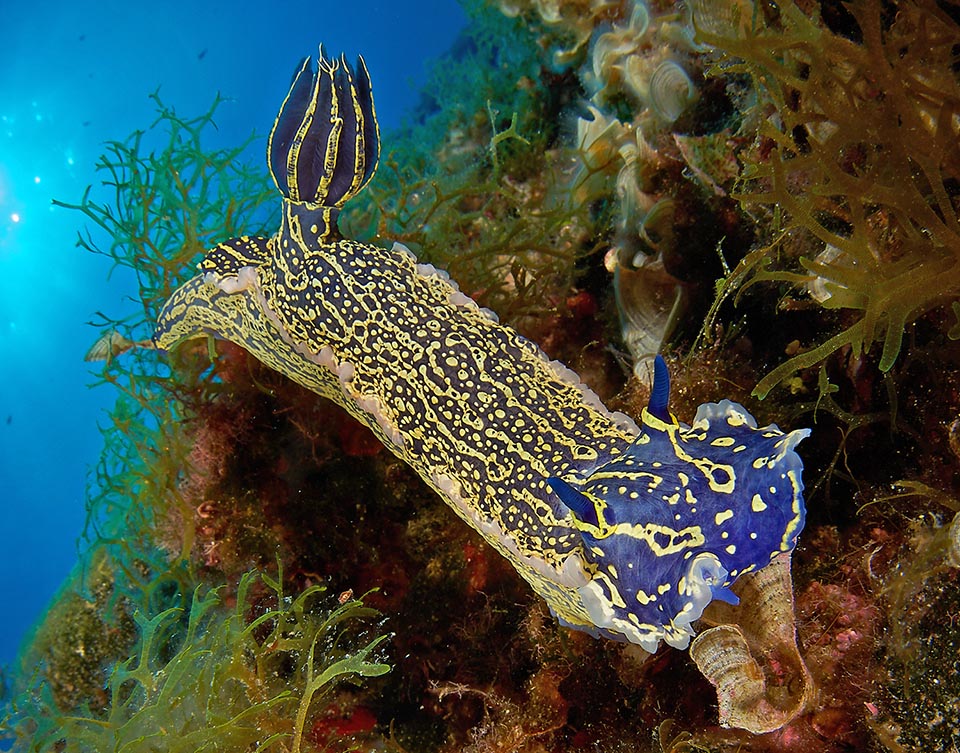 And then confuses ideas. Where head and tail are? For its part also Felimare picta is a greedy predator, but of not running away animals: the sponges © Roberto Boero

The nudibranchs are all incomplete (or insufficient) simultaneous hermaphrodites, that is they have the male and female reproductive organs both functional at the same time.

Although self-fertilization is theoretically possible, it has never been proven and therefore the mating is necessary for the exchange of gametes. This adaptation obviously has its advantages: a casual meeting with another specimen of the same species involves the 100% possibility of genic exchange. A strategy that in the marine world has a very great effect seeing the enormous possibility of dispersion of the eggs and of the organisms that populate it. 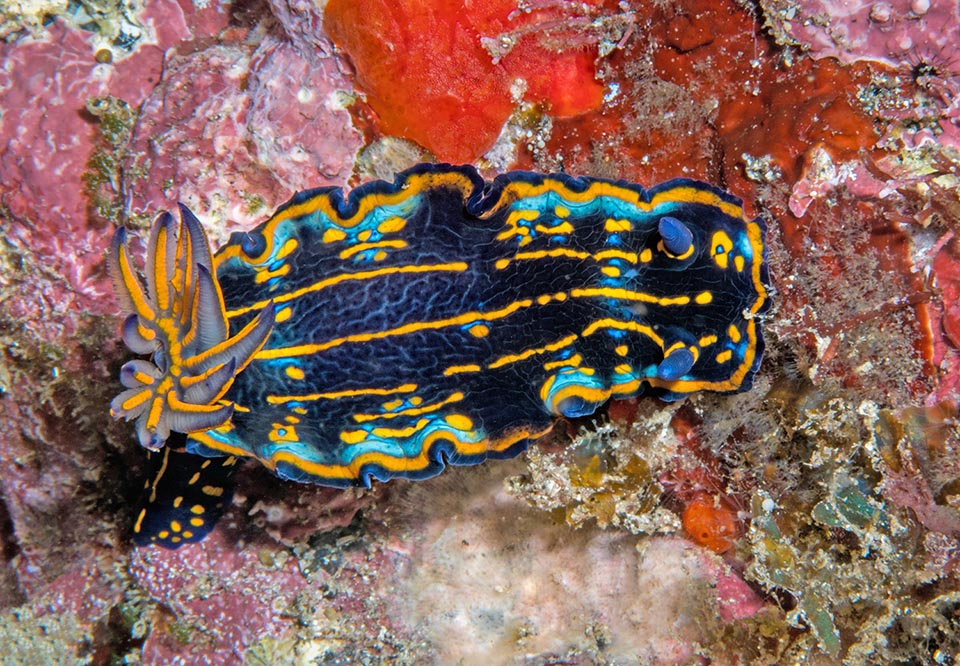 The remarkably variety of Giant dorid colours has led many Authors to create various subspecies, sometimes then elevated to species © Brian Cole

The Dorids do not have eyes particularly specialized and let themselves be guided by their great sensitivity to chemicals for the recognition of the partner.

An actual mating ritual has never been observed but only a sort of common behaviour recognizable in different species: an individual queues up to another following the trail of its mucus until the leader inverses the direction of its movement turning to the right and exposing the part of the body that contains the sexual organs.

As a matter of fact, the nudibranchs have both genital openings on the front right side of the body and, therefore, it is easy to find them attached to each other in a typical spiral position for the cross fertilization. 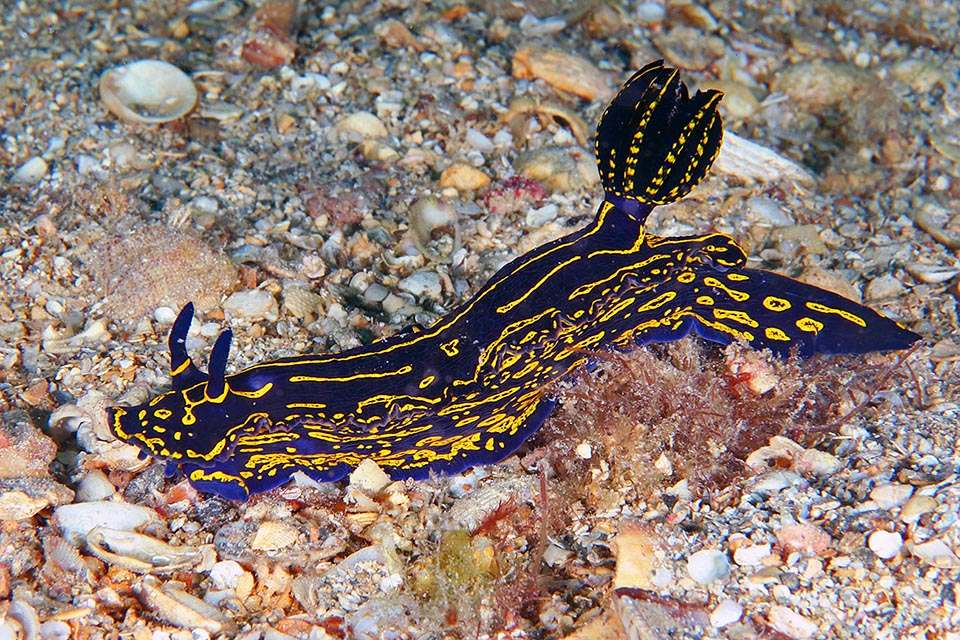 But most surprising is its presence in the Caribbean Sea. The Chromodorididae family, to which belongs, counts now 35 genera and countless species all over the world © Kevin Bryant

Once the mating is completed, the two mollusks separate ready for laying the eggs in characteristic spiral gelatinous ribbons, about ten centimetres wide, of yellowish white colour and with scalloped edges, recalling the shape of a rose.

From the appearance of this deposition it is possible to go back, not exactly easily, to the species of belonging because the shape and the colour of the ribbon are species-specific.

From the eggs develop larvae called veligers, capable of active swimming and of self-feeding, for a period of time not yet well defined, up to the adult form. The mutation in adults appears to be linked and activated by the presence of the food preferred and exclusive of the species, that allows the accumulation of energies important for the mating and for the vital cycle. 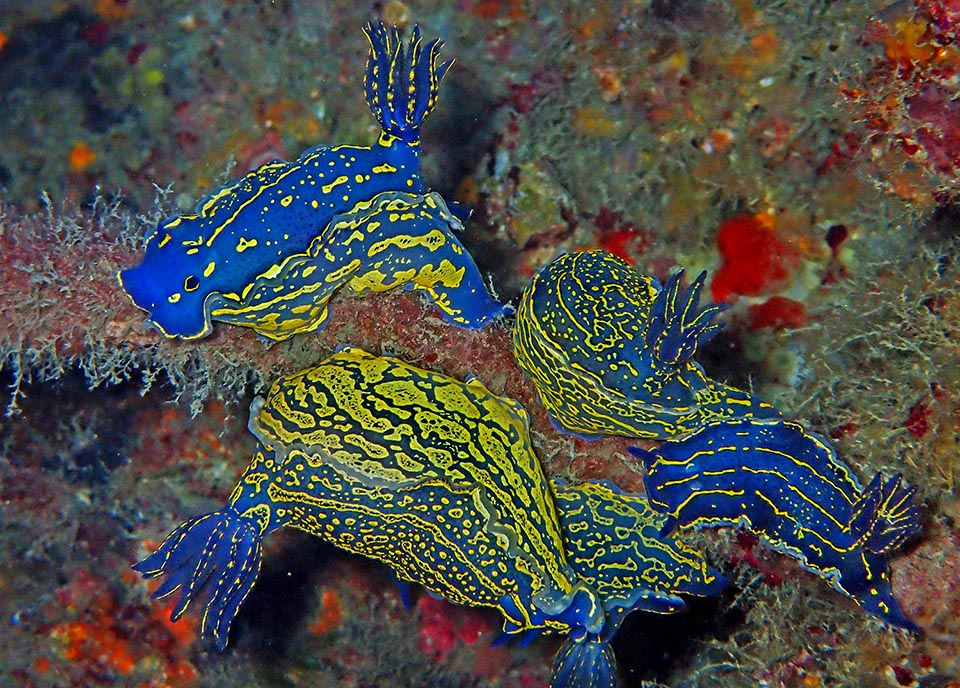 Varicoloured reproductive meeting at the bottom of the sea. The nudibranchs are simultaneous hermaphrodite animals needing the reciprocal gametes transmission. All begins with the pursuit of the partner till when this, persuaded, stops and reverses movement to place next to the pursuer and then start mating © Francisco Sedano

In fact, not rarely, the deposition occurs near the food preferred by the dorids rightly for facilitating their research to the future soon-to-be-born.

Even if the Giant dorid is very much appreciated among the malacologists and the lovers of the sector, its state of conservation is still unknown and is not mentioned in the red list of the IUCN, which evaluates the vulnerability and the risk of extinction of the species.