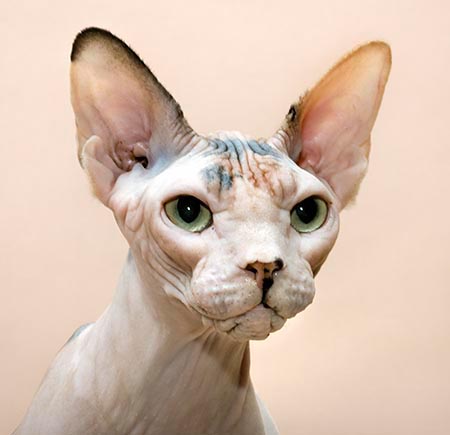 If the hairless cats have always existed, the Sphynx, with its odd way of walking, has appeared as a feline breed by the end of the seventies in Canada. Brought from Toronto to Holland by the Dr. Hernandez, the first Sphynxes have generated a line in France before reaching the USA. The nudity of the Sphynx, which varies from the skin perfectly hairless to a “velvety” down, is caused by a spontaneous mutation. The particularity of this breed does not limit only to the skin, as it is also recognizable by its uncommon typology.

Medium sized, the head is longer than wider. It is rectangular, with marked and rounded contours, evident cheekbones and a very clear demarkation. Seen in profile, the underside of the skull and the front are flat, and extend in a concave curve, palpable at the base of the skull and ending in a straight nose.

Quite short, rounded and well developed, the muzzle is delimited by an important demarcation which puts neatly highlights it against the skull. The upper lips are clearly rounded. The chin is firm and defined.

Lemon-shaped, the eyes are big, well open and expressive. All colours are accepted in harmony with the coat.

Very big and low placed, the ears, at their base, are wide. They must appear disproportionate in comparison to the head. They are rounded at the extremity. Medium-sized, the neck is well muscled. It is arcuate and detaches well the head from the shoulders.

Of semi-cobby size, the body is firm. The musculature, well visible under the skin, is rounded. The chest, barrel-shaped, is wide and deep. The abdomen is well round, like if the cat had just been eating; this particularity does not imply, however, that the cat is obese. The hips and the rump are rounded. 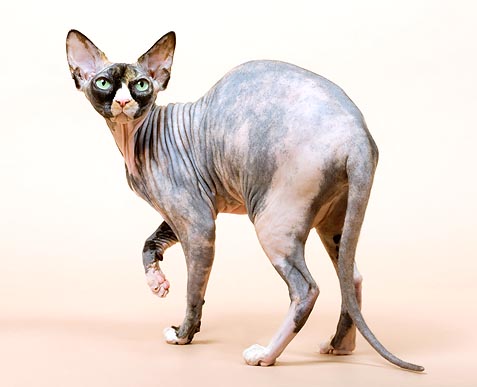 The legs are fairly fine boned, but have a firm and well designed muscle. The fore legs are slightly bent. Oval, the feet have long and thin toes, with well modelled phalanxes. The pads are thicker than for the other feline breeds, and this gives the impression that the Sphynx walks on a sort of airbags. Whip-like, the tail is long and slightly thick at the base and looks like a rat tail.

The skin of a Sphynx can vary from the total nakedness to a “velvety skin”. The kittens have a much wrinkled skin. The adults must keep as more as possible wrinkles, especially on the head, without affecting in any way the normal cat’s functions. The whiskers and the eyebrows are rare or absent.