The Ficus aurea Nutt. (1846) is a quite variable tree, monoecious, evergreen or briefly deciduous with thick crown, up to 30 m tall, initially epiphyte that later one “strangle” the host plant reaching the soil and often becoming independent with a trunk having a smooth yellowish bark, of up to more than 1 m of diameter, tabular roots at the base (flattened roots similar to buttresses contributing to its support) and aerial roots from the branches that once reached the soil form something like adventitious trunks. 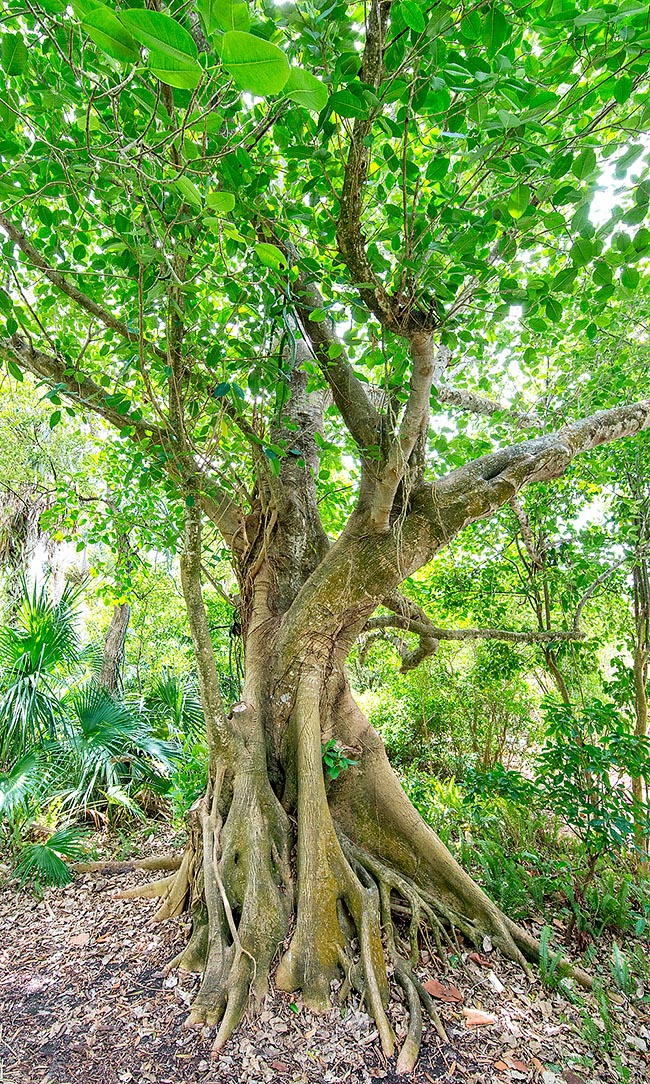 Strangling epiphyte when young, the Ficus aurea is a tree with a legendary vitality that reaches, in Central America, the height of 30 m. Tabular roots, aerial roots transforming in columns and an extended invading root apparatus, not to forget the seeds that germinate even in the cracks of buildings. Fast growth and easy cultivation in the tropical gardens with a dense crown partially deciduous. It resists saltiness, drought and bonsai life © Giuseppe Mazza

The leaves, on a 1,5-7 cm long petiole, are simple, alternate, of variable shape, elliptical, oblong, ovate or obovate, with obtuse or apiculate apex, rounded or subcordate base and entire margin, 8-18 cm long and 4-10 cm broad, rather coriaceous, of glossy intense green colour above, paler below, with 7-12 couples of pale green lateral veins.

The leaves, during the initial phase of growth are protected by a stipule (appendage at the base of the leaf), 1,5-4 cm long, deciduous, of brown colour, glabrous or slightly pubescent.

The syconia, the typical inflorescences of the Moraceae that when ripe form a false fruit, the fig, are axillary, sessile or rarely pedunculate, usually in pairs, globose or globoso-directed downwards, of 0,8-1,2 cm of diameter, of yellow or red colour, covered by the base per 1/3 or 2/3 of the length by a coriaceous bi- or trilobate involucre, the apical opening (ostiole) that allows the access to the pollinator insect, is prominent, of 2-2,5 mm of diameter, and enclosed by 3 dark brown scales.

As known, each species of Ficus is associated to one pollinating insect of the family of the Agaonidae (in our case Pegoscapus mexicanus Ashmead, 1904), that in turn can reproduce only if the species to which it is associated is present, the real fruits (achenes) contain only one very small seed. The sycons are an important source of food for the frugivorous fauna that contributes to the dispersion of the seeds that germinate in the cracks of trunks and branches, but also in those of the walls or in the fissures of the sidewalks, if they find the suitable conditions.

The species is also the food plant of the Marpesia eleuchea Hübner (1818), butterfly of the family of the Nymphalidae, diffused in Central America and in the Caribbean.

It propagates by seed, placed superficially on an organic substratum, sandy, maintained constantly humid, in a luminous position at a temperature of 24-28 °C, can reproduce also by cutting in spring and by air layering by early summer, in these cases, obviously, is to be treated as terrestrial.

Species of fast growth and of easy cultivation that reaches large sizes, consequently suitable as isolated specimens in parks and in large gardens of the tropical and subtropical gardens, due to its extended superficial root system is to be placed sufficiently far from buildings, sewages and, also due to the problems created by the falling fruits, from sidewalks and roads.

It requires full sun or partial shade and adapts to various types of soil, provided draining, slightly acidic to slightly alkaline, bears the salty winds and, when adult, periods of drought. Finally, it is an excellent subject to cultivate as bonsai.