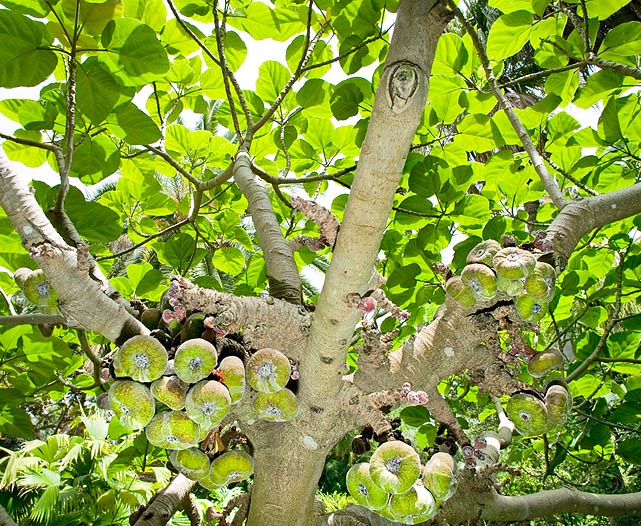 It is native to China (Guangdong, Guangxi, Guizhou, Hainan, Sichuan, Xizang and Yunnan), Bhutan, India, Malaysia, Myanmar, Nepal, Pakistan, Thailand and Viet Nam, where it lives in the pluvial forests along the rivers and in the valleys up to about 2000 m of altitude.

The name of the genus is the Latin one utilized for the common fig (Ficus carica); the name of the species comes from the Latin “auricula” = ear, with reference to the shape of the leaf.

The Ficus auriculata Lour. (1790) is a shrub or an evergreen or semi-deciduous tree, up to 10 m tall, with expanded canopy, trunk up to 45 cm of diameter and brown grey bark; the young branches are thin, reddish brown, pubescent, with the leaves concentrated in the terminal part.

The leaves, on a robust, 5-20 cm long petiole, are alternate, ovate-cordate with slightly toothed margin, 10-40 cm long and 8-30 cm broad or more, glabrous on the upper page, pubescent below, with evident veins; the young leaves are red.

The inflorescences are syconia, that is, hollows of the fleshy walls which contain totally the flowers, accessible through an apical opening enclosed by tiny scales (a typical example are those of the common fig, Ficus carica).

The edible syconia have 4-8 cm of diameter. The species is dioecious © Giuseppe Mazza

The syconia, reddish brown when ripe, produced in clusters on particular branches having no leaves at the base of the trunk or directly on the main branches (cauliflory), are piriform or depressed globose, of 4-8 cm of diameter, on a robust pubescent, 4-6 cm long, peduncle with only female or male flowers inside (dioecious species).

For the fructification, the presence of its pollinating insect is necessary. As it is well known, to each species of Ficus is associated a specific insect belonging to the family of the Agaonidae (in our case, the Ceratosolen emarginatus Mayr, 1906), which, in turn, may reproduce only the species of Ficus to which it is associated is present; the fruits are tiny achenes containing one seed only.

It reproduces by seed, which is to be scattered on the surface of the substratum kept humid at the temperature of 20-22 °C, by cutting and by air layering.

It is one of the most characteristic species of the genus, due to the huge leaves and the particular fructification.

It requires full sun, or a slight shade, and a position sheltered from the winds. It prefers light soils, rich in organic substance, kept constantly humid during the vegetative time and tropical and subtropical climate; in the warm temperate ones it behaves, in winter, as deciduous, resisting to temperatures reaching the -3 °C, lower values of some degrees destroy the aerial part, but usually the plant is capable to grow again in spring, from the base.

When in pot, it is a much ornamental plant, fit for vast luminous locations; the watering must be regular in summer, reduced in winter, allowing the superficial layer of the soil to dry up, and the temperatures must be over the 10 °C.

The fruits are edible and are consumed raw as well as cooked, for instance in the curry, or utilized for preparing preserves, locally, the leaves are used as fodder.

Parts of the plant are utilized in the traditional medicine for various pathologies; lab studies have shown the antioxidant activity of the bark extracts.