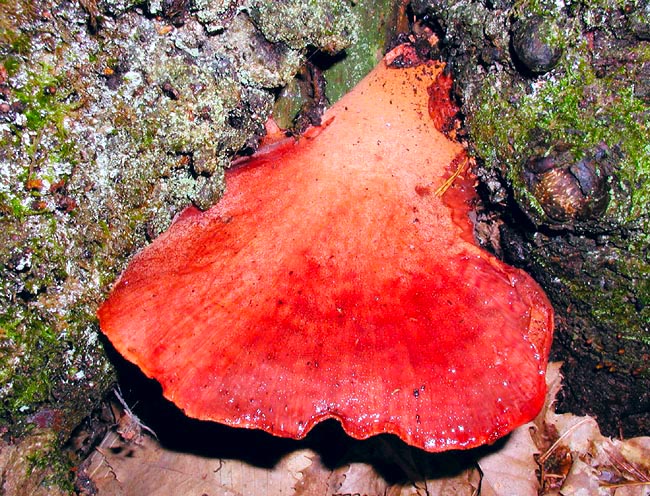 The etymology of the name refers to the appearance of the fungus, from the Latin “hepar, hépatis” = liver, liver-like.

It is known under dialectal or vulgar names a bit everywhere. In Italy it is known under the name of “lingua di bue” (ox tongue), due to its typical shape, “fegatello” (small liver), due to the consistency of its flesh especially when cooked. In Spain, it is known under the names of “lengua de buey”, “hígado de vaca”, “fetge de vaca”, “idi-mihi”, “lingua de vaca”, “lingua de boi”. In France, with the name of “langue-de-bœuf”. It is a fungus known since the old times. Gaius Plinius Secundus (known as Pliny the Elder) describes it, in his opus “Naturalis historia”, as a fungus absolutely sure for the health, in fact, it is one of the very few which may be consumed raw.

To the genus Fistulina are ascribed basidiocarps, sessile or with rudimental lateral stem, annual and lignicolous. The carpophore has the upper part (sterile) tomentose or with tiny scales, mucilaginous; the colour is red, more or less strong dark red. The hymenophore, placed on the lower part, is formed by tubules very close each other, but separated among them, tiny pores, thin, round 4-6 per mm. The flesh is thick, firm, fibrous, and red, with whitish venations. The hyphal system is monomitic, with or without joint-buckles; the spores are ovoid, hyaline at the microscope. There is only one species in Europe. 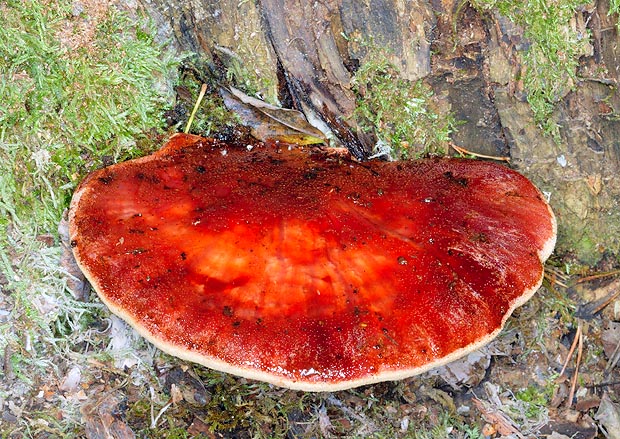 Edible, it kills the host tree with the brown rot but enhances its wood © Giuseppe Mazza

Carpophore: initially pulvinate, then spatula-shaped, sessile or laterally stipitate, it may reach the 20 cm of diameter and the 5 cm of thickness, fleshy, juicy, fibrous, tender then hard. The cuticle is verrucous, almost gelatinous, radially zoned, of red, purple or brown colour, the margin is obtuse.

Hymenophores: not very long tubules, free, loose one from the other, but appressed to each other, from white to reddish. The pores are small, round, and become white then dark with the age or after rubbing.

Flesh: thick, juicy, tender then hard, with radial venations, when cut or broken it exudes a red liquid; the colour is yellow with more or less dark venations, dark red under the cuticle. It has a pleasant smell and a mild taste.

Habitat: it grows in trunks of living latifolious trees, preferably chestnut but also oak; it may live also on dead trees, in summer and in autumn.

Edibility: edible, it can be consumed also raw, provided young. In some zones it is much sought for. 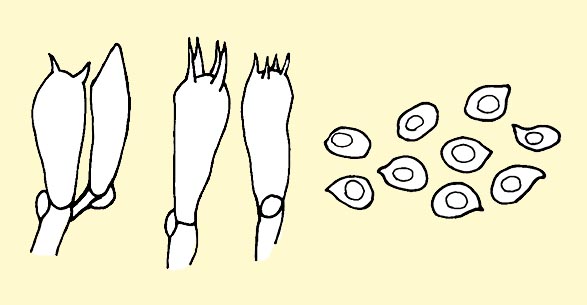 The hyphal system is monomitic.

Remarks: It is a very easy to be determined fungus. As a matter of fact, there are no similar species with which it may be mistaken. It is quite easily found on the trunks of chestnut, but also of oak, during the autumn. It causes the brown rot in the plants and fructifies several years after the appearance of the rot itself. The rot develops very slowly and by the initial stages gives the wood a particular colouration which renders the same very sought for and appreciated.

It is a unique species in Europe, very abundant in the temperate zones, little common in North Europe. It is a fungus known since the oldest times, when it was collected and eaten raw as well as fried.