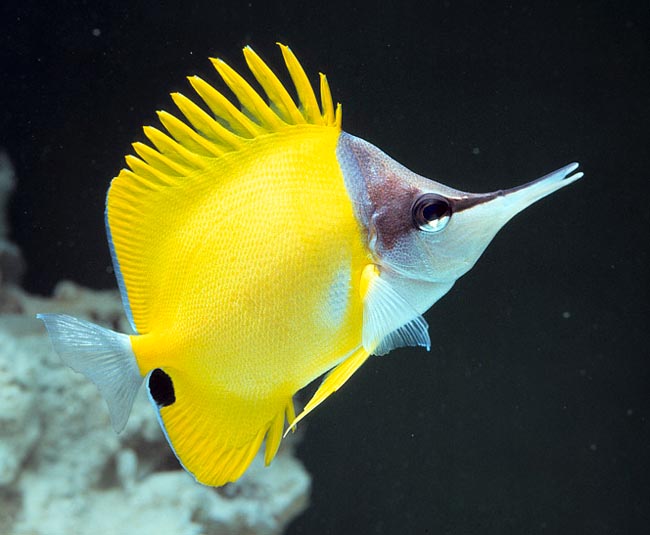 The showy unusual Longnose butterfly fish (Forcipiger flavissimus Jordan & McGregor, 1898) belongs to the class of the Actinopterygii, the ray-finned fishes, to the order Perciformes and to the family of Chaetodontidae.

The name of the genus comes from the Latin “forceps” = tongs and “gero” = carry, in other words, it is a “fish carrying the tongs”.

The name of the species “flavissimus” refers, in Latin, to its showy yellow livery.

For years, it has been confused with the Longnose butterflyfish (Forcipiger longirostris Broussonet, 1782), a virtually identical species, but with the snout one and a half longer, the chin adorned by a black dotting, closer mouth and 1-2 spiny rays less on the dorsal fin.

It is the butterfly fish with the amplest distribution, exceeding the 100 million of square kilometres, in the tropical waters of the Indo-Pacific.

Just as an indication only, we find it from South Africa and Madagascar, to the Gulf of Aden and the Red Sea, to the Maldives, India, Sri Lanka, Thailand, Australia, Indonesia, New Guinea, Micronesia, Philippines, Taiwan and China up to southern Japan. In the southern Pacific, it reaches Lord Howe and Easter Islands; eastwards, up to the Hawaii, the Galapagos and even Mexico and the southern part of the Gulf of California.

It lives in the madreporic formations, also on the outer sides of the reefs up to about 150 m of depth.

With the beak, it can reach the 22 cm. The body is flat, high, and more or less oval, with the oblique dorsal profile of the head ending in a long snout. The tiny mouth has three rows of teeth on each jaw which allow the seizure of small preys. 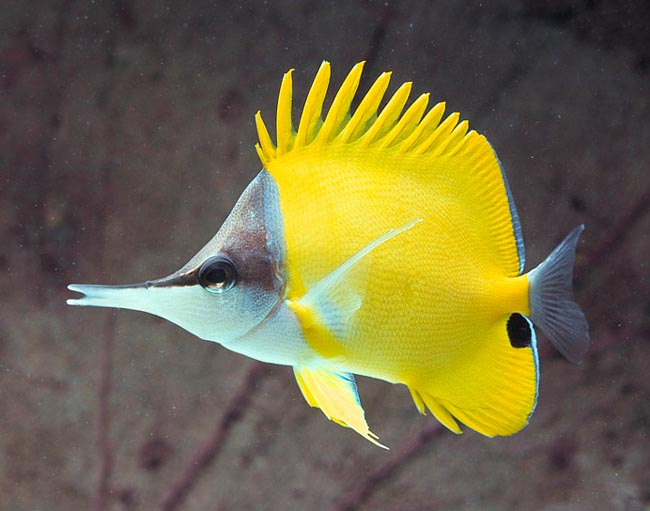 Not endangered at all, it has colonized more than 100 million square kilometres © Giuseppe Mazza

In the island of Guam, belonging to the Marianas archipelago, they have found also completely black individuals and colourless specimens, with white head, a dark vertical band at the level of the operculum and an horizontal one crossing the eye extending to the snout; perpendicular to each other traits which can already be glimpsed in the bluish vertical band close to the brown triangle of the normal subjects and in the darker zones of the same.

The Forcipiger flavissimus has a very varied diet based on small benthic animals, especially crustaceans, but also hydroids, small fragments of polychetes, pedicels of sea urchins, eggs and larvae of other fishes.

It lives solitary or in small schools, reaching the venerable age of 18 years. During the reproductive period pairs take form, which then will keep more or less stable. The eggs are pelagic.

The juveniles are much fished for the aquaria market, but the populations can double in less than 15 months and the varied diet protects them from the climate changes. The vulnerability index of the species is consequently low: 18 per 100.