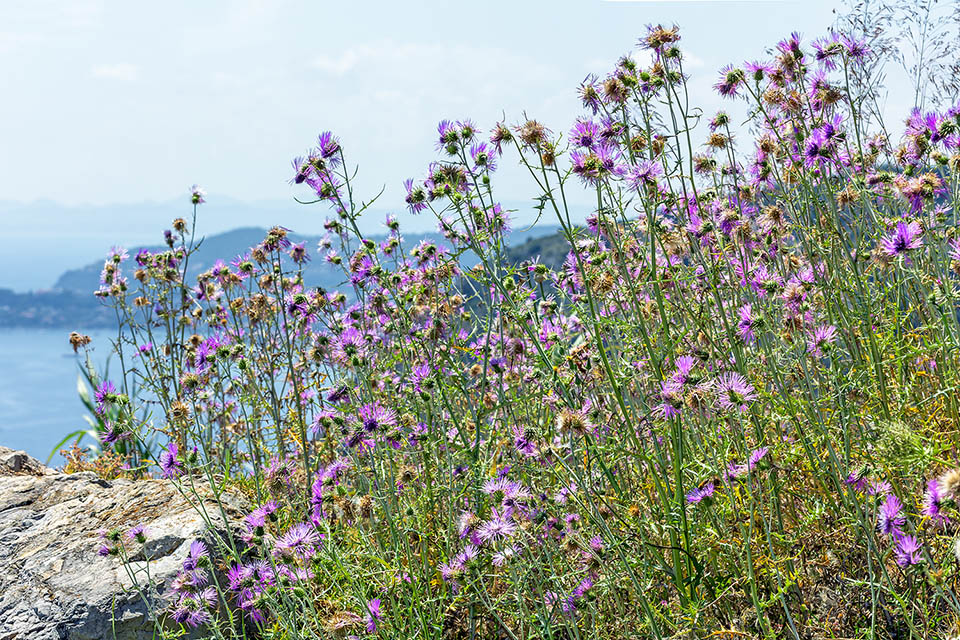 Naturalized also in other European countries, like Great Britain and Germany, Galactites tomentosus has an ample distribution in the Mediterranean Basin. It grows in uncultivated and disturbed areas, often associated with annual nitrophilous plants. It’s a species with biennial biological cycle characterized by an even 1 m tall erect stem © Giuseppe Mazza

Galactites tomentosus is an herbaceous species belonging to the Asteraceae, the family of spermatophytes having globally the greatest number of species. In fact, it includes more than 23.000 species and 1.679 genera.

The genus Galactites belongs to the subtribe Carduinae, in whose inside its phylogenetic position is considered as “basal”, that is representing one of the first groups having separated from the remainder of the subtribe.

The genus has considerable affinities with Carduus, Cirsium, Lamyropsis and Ptilostemon, but from the morphological point of view it distinguishes especially for the not decurrent leaves, white-tomentose, the sterile peripheral flowers, the stamens with grown together filaments, the pappus of feathery hairs and the achene with hemispherical small crown.

The name of the genus Galactites originates from the old Greek “γάλα” (gala), milk, with reference to the white colour of the thick down covering the stem and the leaves, characteristic emphasized in Latin also by the specific epithet tomentosus, that is, “covered by down”. 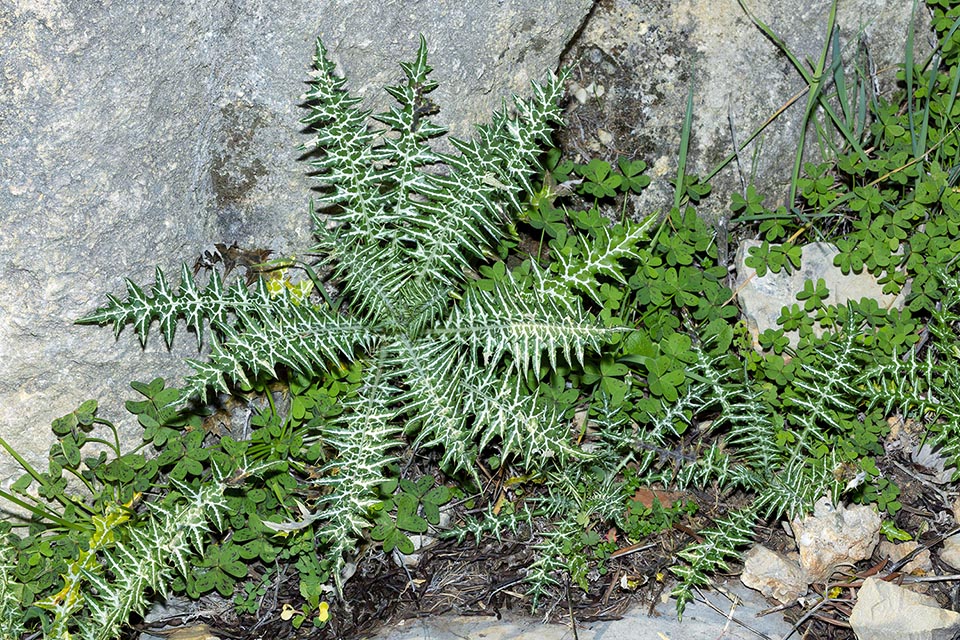 Basal leaves rosette of a plant at the first year of its cycle with the typical clear veins. The leaves have thorns, robust and sharp, arranged on the margins © Giuseppe Mazza

The species has been described by the German botanist Conrad Moench in 1794. Actually, already in 1785 the plant had been identified by another Author, the Turinese botanist and physician Carlo Allioni, and nominated Centaurea elegans All.

The genus Galactites includes only three other species at the present state of knowledge (2022). These are: Galactites duriaei Spach ex Durieu, spread in Spain, France, Great Britain, Andorra, Algeria and Morocco, Galactites mutabilis present only in Algeria and Tunisia and finally Galactites rigualii Figuerola, Stübing & Peris, endemic to Spain. 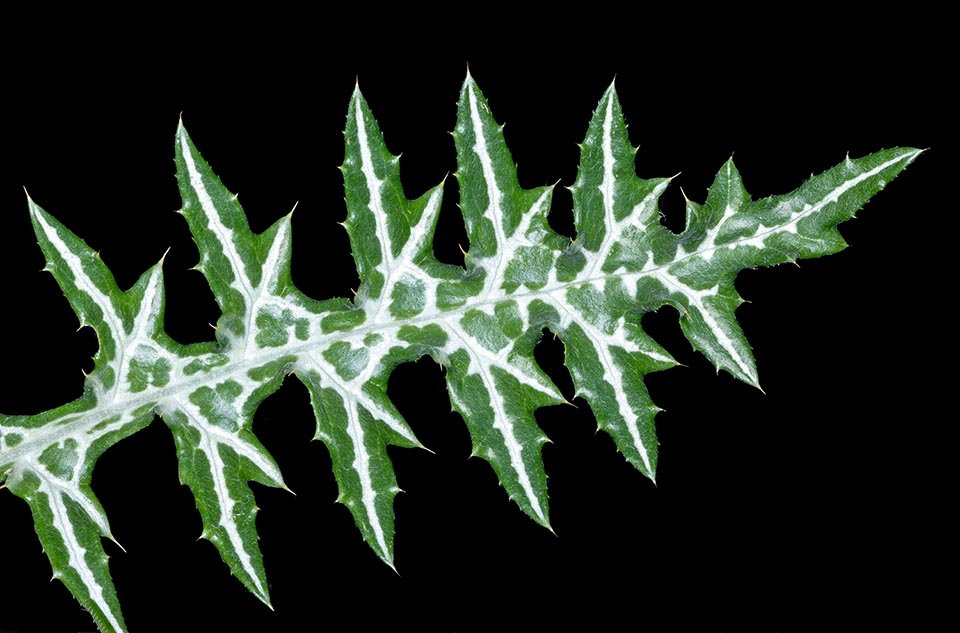 The plant is known with various local and vernacular names, such as, for instance, Aprocchiu fimminedda, Cardunazzu,

It is an herbaceous species with a biennial biological cycle, characterized by an erect, up to 1 m tall stem, covered by a dense pubescence of white colour and with wings provided with thorns.

The upper part is often ramified. The leaves are alternately arranged and have a pinnatifid-pinnatisect shaped lamina. The upper pagina is suffused with white, whilst the lower one is white and tomentose.

Also the leaves brear strong and sharp thorns, arranged on the margins. The inflorescence is a capitulum, typical to the family of the Asteraceae. 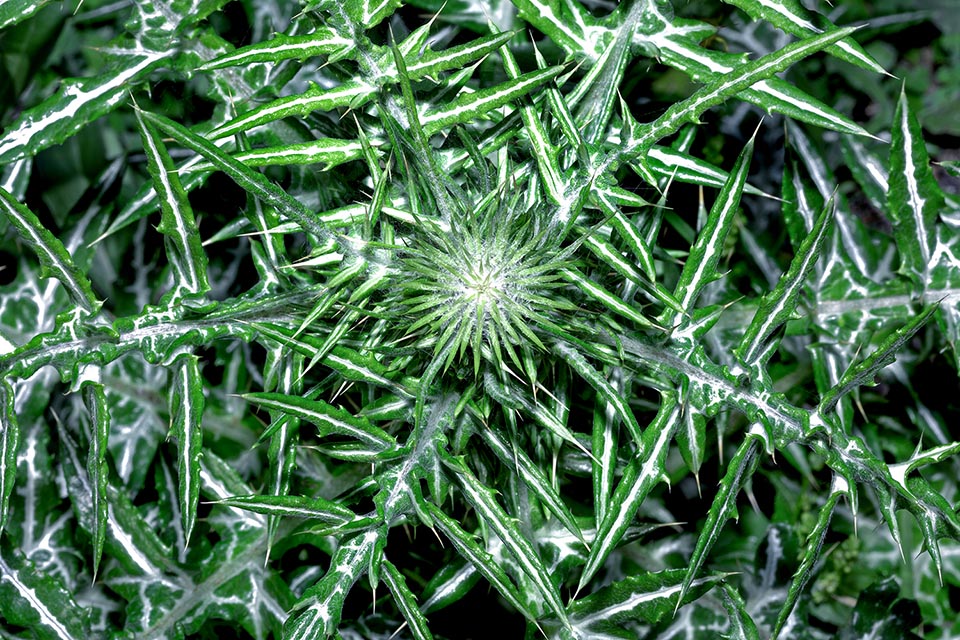 Inflorescence forming in a plant at the second year of the cycle. This part is edible and in the popular medicine the species boasts also medicinal virtues © Giuseppe Mazza

It is formed by a whole of small flowers, called florets, sessile and compact, inserted in the extremity of the receptacle, and arranged in a very dense way, forming an inflorescence that often is superficially mistaken with a single flower, as often is the case, for instance, with the daisies.

In the Asteraceae, the capitulum may be formed by two types of flowers or by only one of these: tubulous flowers, with radial symmetry and with a 5-lobed corolla; ligulate flowers, with bilateral symmetry, with corolla having 5 lobes, merged in a nastriform extension called ligula, that mistaken with a petal in the flowers of the daisies.

In the case of Galactites tomentosus the capitulum has a discoidal shape and is carried by more or less long peduncles. The capitula can be solitary or multiple, united to form racemes, panicles or corymbs.

The capitulum is characterized by an involucre formed by scales enclosing inside the receptacle located at the base of the flowers. 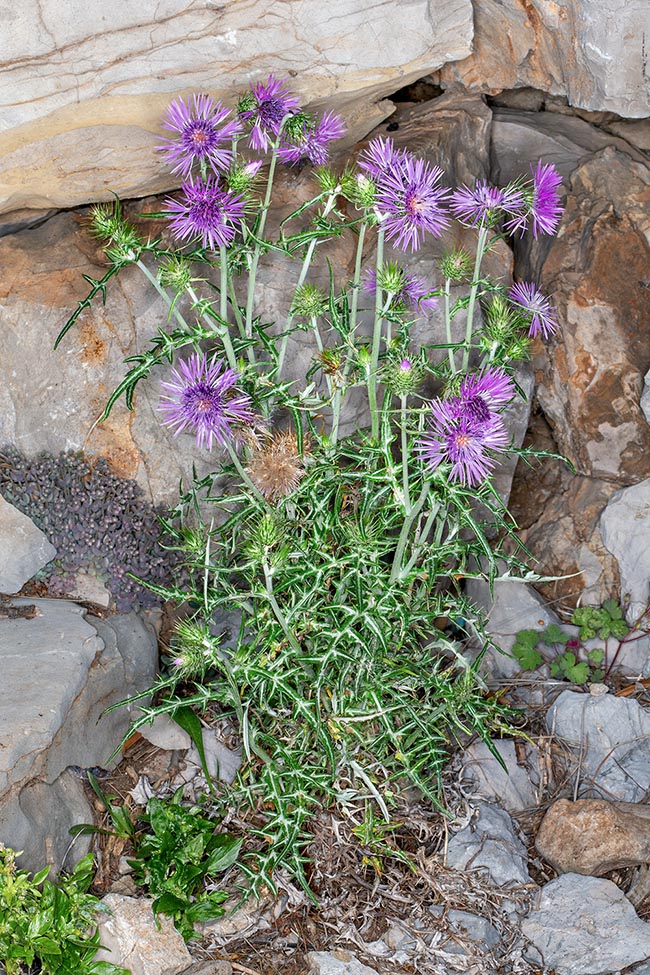 Galactites tomentosus has erect stems, often ramified on top, characterized like the leaves by a dense white down © Giuseppe Mazza

The involucre has a campanulate shape and is formed by numerous imbricate scales. These have a triangular shape and especially the outermost ones usually have a mucro, that is an apical projection often thorny. The innermost scales have no thorns and are flat.

The receptacle is flat or convex, without pagliettas, that is bracteoles usually having the shape of a small scale of membranous consistency, that stand at the base of each flower. The last are arranged in great number in the capitulum and only rarely are tubulous, hermaphrodite or rarely unisexual.

The central flowers are all fertile, whilst those more peripheral are sterile, flat, patent and exceeding the involucre.

The calyx is formed by very reduced sepals and represented only by small scales. The corolla has 5 lobes, with a long and thin tube.

The colour is pretty variable and often influenced by the typology of soil where the plant grows. As a matter of fact, are present shades of colour going from white-lilac to pink-purple. The peripheral flowers are longer.

For what concerns the male part of the flower, the androecium, the stamens are 5 and have concrescent filaments that have the particularity of making movements to free the pollen.

The anthers have a short tail at the base and linear-oblong apical appendices.

The female part of the flower, the gynoecium, is formed by an inferior ovary and by a style ending in a bifid stigma that protudes considerably from the corolla.

The blooming period is rather long, going from April to July, depending on the local climate conditions.

The pollination occurs by insects such as diurnal and nocturnal butterflies (lepidopters, moths and coleopterans) and bees. This is, therefore, an entomogamous pollination.

The fruit is an achene, that is an indehiscent dried fruit, with an often obovid shape and at times more or less compressed. In some cases, instead, can be globose or pyriform. The surface is normally smooth and glabrous. The apical part is surmounted by a ring containing nectar.

Similarly to other membres of the family of the Asteraceae, also in Galactites is present a pappus, feathery and light appendage having the function of favouring the dispersion of the seed by the wind, known also as anemochorous dissemination.

The whole of achene and pappus forms the cypsela, the fruit typical to the Asteraceae. Besides the wind and the gravity, the dispersion of tje seeds occurs later on also by the ants therefore we can talk of myrmecoria dissemination. 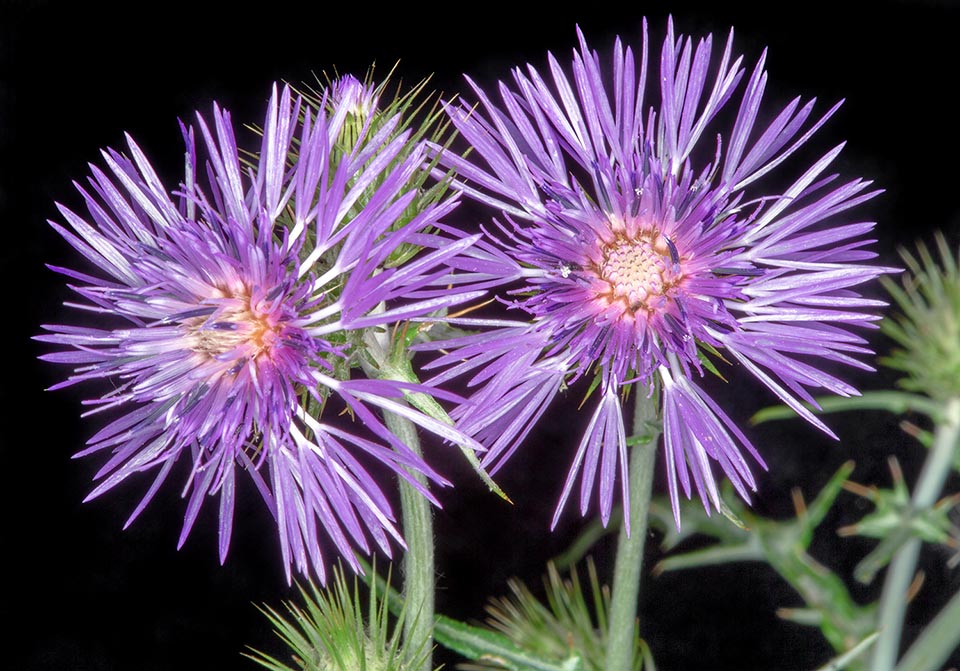 The inflorescence is a discoidal capitulum with tubulous flowers. The campanulate involucre formed by several imbricate scales © Giuseppe Mazza

The species has an ample distribution in large part of the Mediterranean Basin and is often very frequent. In fact, Galactites tomentosus is present in Morocco, Algeria, Tunisia, France, Greece, Iberian Peniondula, Italy and Balkan Peninsula. The species has naturalized also in other countries of Europe, such as Great Britain and Germany.

In its distribution area the species is frequent from the sea level up to 1300 m of altitude, colonizing degraded areas, like uncultivated land, ruins, pastures and the edge of the roads. From the phytosociological poin of view, the species is considered as characteristic of the alliance Echio plantaginei-Galactition tomentosae O. Bolòs & Molinier, 1969, that unites the annual sub-nitrophilous communities present in the fallow fields, along the edges of the roads and in the abandoned areas. 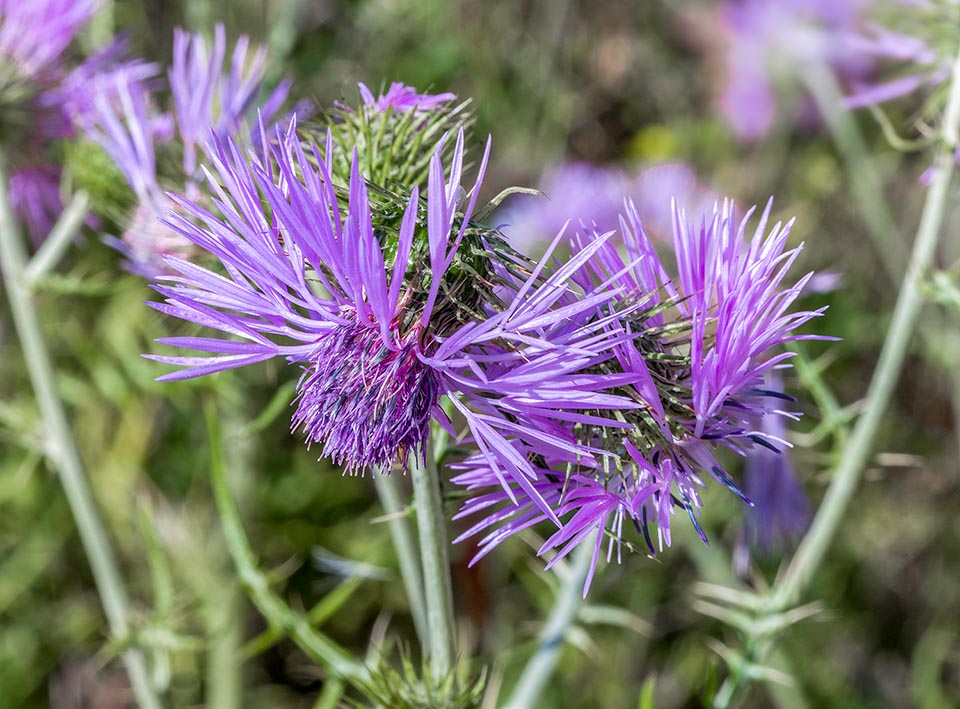 The capitulum colour is quite variable, often influenced by the typology of the soil. It varies from white-lilac to pink-purple shades © Giuseppe Mazza

It is considered an edible plant already by old Authors, like Diodorus and Diocorides. In particular, are utilized the young inflorescence and the rlevant floral stem that may be eaten raw as salad after cleaning.

The leaves and the stem are utilized as well as salads, also in the production of preserves in oil and in vinegar. Furthermore, the popular medicine ascribes to the species astringent, stimulating, diuretic, hypetensive and tonic properties. In some areas of Southern Italy, in particular, in Calabria, Sardinia and Sicily, is produced and excellent honey from this species.

If in the Mediterranean regions it is often considered as a annoying infesting grass, in some areas with temperate climate of Europe and USA, the species is utilized for its green-silvery foliage and its rich blooming. There is also one variety “alba” characterized by variegated leaves. In cultivation the species requires well drained soils and very sunny expositions.

→ To appreciate the biodiversity within the ASTERACEAE family please click here.>