The species is native to Dominican Republic and Puerto Rico where it grows in the open humid forests, often exceeding in height the surrounding vegetation, on rocky-calcareous steep hill slopes (mogotes), in an area characterized by markedly seasonal climate.

The genus is dedicated to the German mathematician Johann Friedrich Carl Gauss (1777-1855); the specific name is the Latin adjective “attenuatus, a, um” = thinner, with reference to the stem. 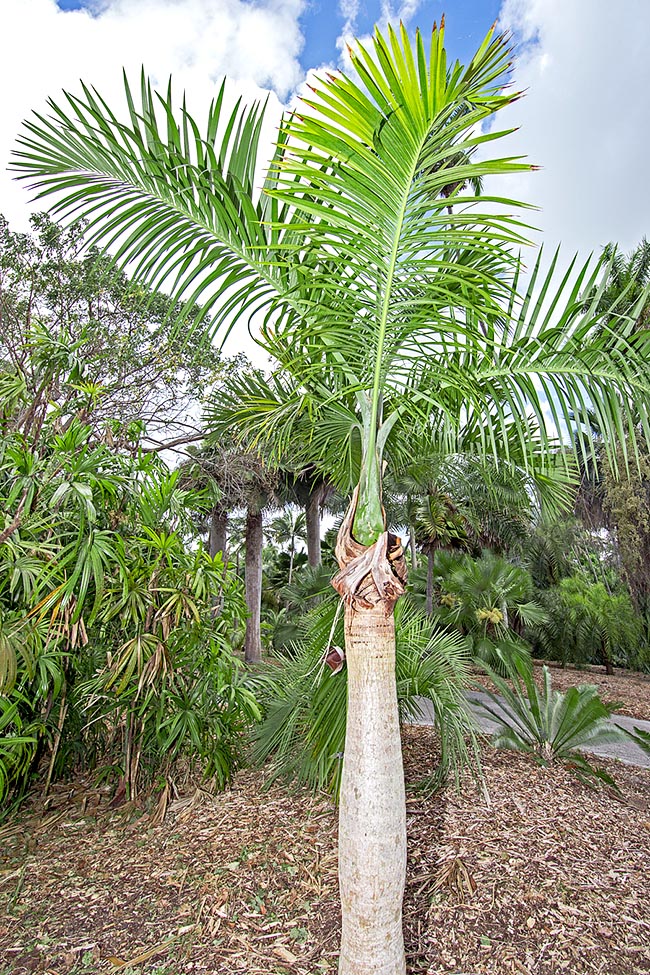 Native to Dominican Republic and Puerto Rico, Gaussia attenuata is a “red list” species, at risk of extintion in nature due to the anthropic pressure. Unusual swollen stem close to the base © Giuseppe Mazza

The Gaussia attenuata (O.F.Cook) Becc. (1912) is a solitary monoecious species, unarmed, with stem, up to more than 20 m tall, smooth, grey, that shows a swelling, of up to about 25 cm of diameter, close to the base, then decreasing gradually up to about 10 cm of diameter under the crown.

The stem displays at the base a mass of robust roots, of about 3 cm of diameter, with short protuberances similar to spines arranged circularly. The  crown is usually formed  by 5-7 leaves, on short petiole, pinnate, 1,2-1,8 m long, with linear-lanceolate leaves having acuminate apex, 30-50 cm long and 2,5-3,8 cm broad, close each other and arranged on different stages, but more or less bent upwards, of slightly glossy intense green colour; the foliar base of pale green colour, open from the side opposite to the petiole, is 20-30 cm long.

Inflorescences initially between the leaves (interfoliar), about 1 m long, with ramifications of the second order, bearing on each rachilla groups (acervuli) of 4, rarely 5, tiny unisexual yellowish flowers, almost lined and strictly close, with a female flower at the base followed by the male ones. The male flowers open and fall in sequence starting from the extreme, when all of that group have fallen the female flower opens.

It reproduces by seed in calcareous draining loam maintained humid at the temperature of 26-28 °C with germination times of 4-6 months.

Palm of curious appearance, rare in nature and in cultivation, of rather slow growth, cultivable isolated or in group in the tropical and subtropical zones, its cultivation may be tried in the mildest warm temperate ones, where temperatures around the 0 °C are very short-lasting exceptions. It requires full sun, except during the very first stages of growth, when is preferable a slight shade, alkaline soils perfectly draining and, well rooted, may stand periods of drought.

Due to the progressive reduction of its habitat, caused by the expansion of the agriculture, the species has been inserted in the red list of the IUCN (International Union for the Conservation of Nature) as “vulnerable” (species at risk of extinction in nature).