The unusual and elegant Lamarck’s angelfish (Genicanthus lamarck Lacepède, 1802) belongs to the class of Actinopterygii, the ray-finned fishes, to the order of Perciformes and to the family of Pomacanthidae, the angel- fishes, which count 9 genera and 74 species.

The name of the genus comes from the Greek “genys, yos” = cheek and “akantha” = spine, with reference to the great spine at the base of the operculum.

The Latin name of the species lamarck honours, as Lacepède himself explains, the memory of Lamarck, or better, Jean-Baptiste Pierre Antoine de Monet, Chevalier de Lamarck (1744-1829), French naturalist, zoologist and botanist who hypothesized the first evolutionistic theory, the Lamarckism, related to the inheritance of the acquired characteristics.

It is present in the tropical waters of the eastern Indian Ocean and of western Pacific. We find it, indicatively, at the Andaman Islands, in Thailand, Malaysia, Indonesia, New Guinea, Australia, Philippines, Taiwan and China up to the southern part of Japan. South-eastwards, it has colonized the Solomon Islands, Vanuatu and stops at the Australian Great barrier reef.

It lives in the lagoons, in relatively shallow and calm waters, but also on the outer slopes of the reefs, between the 10 and 30 m of depth, forming pelagic aggregations usually keeping far away from the bottom.

The males, bigger, can reach the length of 25 cm, but it’s a species seldom exceeding the 20 cm. 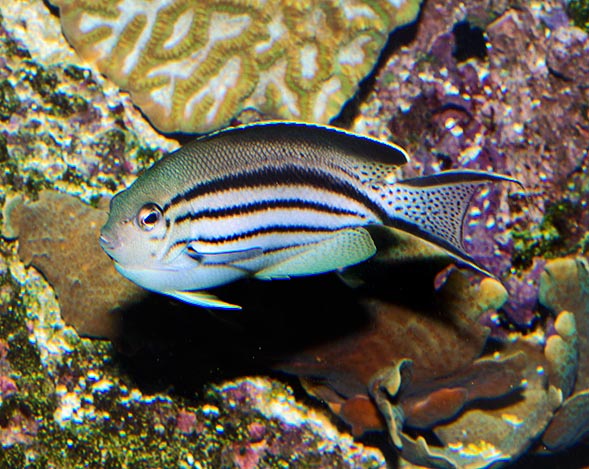 Females' first black stripe is wide, the caudal is black edged and the ventral is white © Giuseppe Mazza

Given that it is a hermaphrodite protogynous species, with females which may transform in males and that there are therefore intermediate forms, we note a certain sexual dimorphism.

But in the males we note a golden spot on the head and a showy blue zone at the base of the pectoral fins. The ventral fins are black and the prolongations of the caudal fin are white. Furthermore, from the eye start some irregular black traits.

In the females the ventral fins are, on the contrary, white, the first dorsal black stripe is much wider than the others and ends up in one of the two horizontal black stripes typical of the caudal. The juveniles have a livery similar to that of the females, but are, proportionally, shorter.

The Lamarck’s angelfish nourishes of zooplankton. The males usually control a small harem of 3-6 females, but are not particularly territorial and coexist peacefully with other males in the same zone. However, among them there is a precise hierarchical scale and the females prefer to join the dominant males.

The eggs and the larvae are pelagic. The populations take 1,4-4,4 years for redoubling, and the species has a moderate vulnerability index, of 30 on a scale of 100.