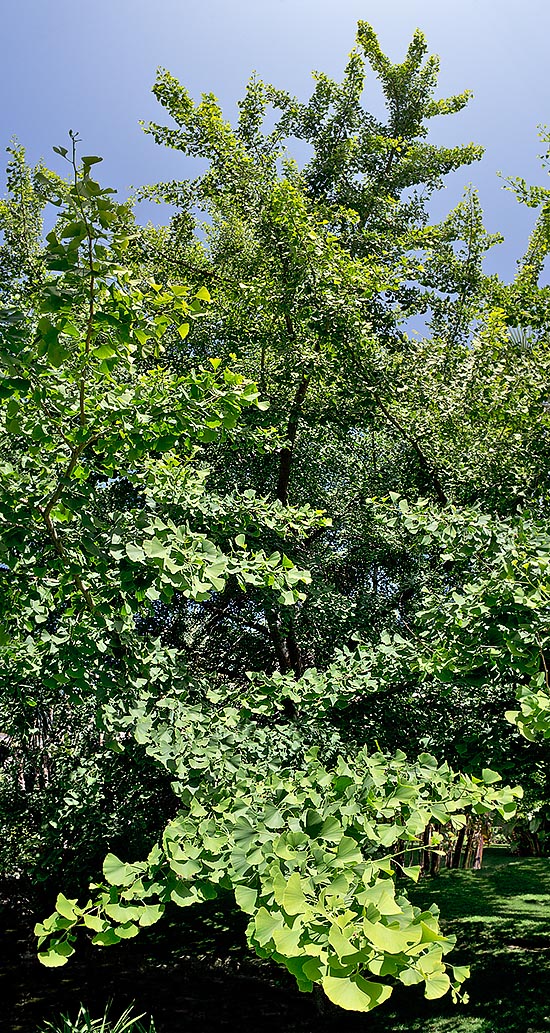 Ginkgo biloba is a strong and longevous living fossil. Sexes are separated in different plants showing, rare case in the green world, a sort of sexual dimorphism © Giuseppe Mazza

The Ginkgo (Ginkgo biloba – L. 1771) is the unique surviving species among those of the class of the Ginkgoinae, dating back to the Permian era, during the Mesozoic (Jurassic and Cretaceous) between 50 and 270 million of years ago, widely diffused in the whole boreal hemisphere such as Ginkgo digitata, Ginkgo huttonii and Ginkgo primordialis , then almost extinct and reduced to this unique species, that can be considered as a living fossil.

Until a few decades ago its spontaneous presence in the wild was not known, but recently they have ascertained natural populations in some remote regions of China: Nanjing (capital of the province of Jiangsu), Zheijang, Anhui, in the Guizhou. Presently its distribution, due to cultivation, and at times to the running wild (France, Germany, etc.), mainly includes most of Asia, Europe and North America.

The ginkgo is a widely diffused tree as ornament plant of parks, gardens and alleys. In Japan the roasted seeds, known also as white nuts or pa-kwo are consumed as dried fruits and suggested as antihelmintic, or fresh as side dish to typical dishes; they contain sweet oil with a pleasant taste, pectins, citric acid, and glucose.

The Japanese name of this species, translatable in cho (foot duck, due to the shape of the leaves) or Yin-kuo (silvery fruit, silvery apricot) hence Gingkyo, was known to Linnaeus who however in the Mantissa Plantarum (1767) writes Ginkgo due to a printing error originated by a wrong transcription of the name made by the German botanist Engelbert Kaempfer who, the first, observed the species in Japan in 1792; this then has been maintained due to the rigid rules of the botanical nomenclature.

Many texts from the past report for the Ginkgo biloba the name of Salisburia adiantifolia Smith (1797) because the leaves recall in the shape those of the Black maidenhair fern (Adiantum capillus-veneris).

Commonly it is also known under the name of Salisbùria, Gìnko or Tree of the 40 écus (40 écus was the sale price of the first specimens introduced from England to France).

The name of the species comes from the Latin “bis” and “lobus”, with reference to leaves often divided in two lobes.

In Korea, in Manchuria, China and in Japan close to the temples, the pagodas and near the imperial palace, exist millennial specimens planted by the old monks which considered the plant sacred to Buddha and, close to the temple of Zempokuj (Tokyo) dedicated to him, exist a specimen of ginkgo with a trunk of 9 metres of circumference and 20 metres of height dating back to about the 1231. After the explosion of the atomic bomb in Hiroshima, at 800 metres from the epicentre was found a Ginkgo: the trunk was destroyed but the stump produced new buds and from these ones was born a new tree that is now considered as one of the wonders of the city. In the Kyongky-do exists a patriarchal Ginkgo that has reached the 1000 years of age, a circumference of 14 metres and a height of 60 metres! Some authoritative texts relate also reports of specimens that should have reached the 4000 years!

The Ginkgo is a tree of second magnitude, up to 30 (40) m tall, with erect, slender trunk with apical gemma always in operation continuing to elongate with a greater speed than the secondary lateral branches (monopodial habit, characteristic of many species of conifers). Little abundant ramifications, patent with the extremities of the branches curved upward to create a conical-pyramidal summit in the male specimens or more expanded, elegant, in the female ones.

The bark is clear, brownish grey and almost smooth in the young specimens, then, with the age, turns greyer, rugged and grooved longitudinally. 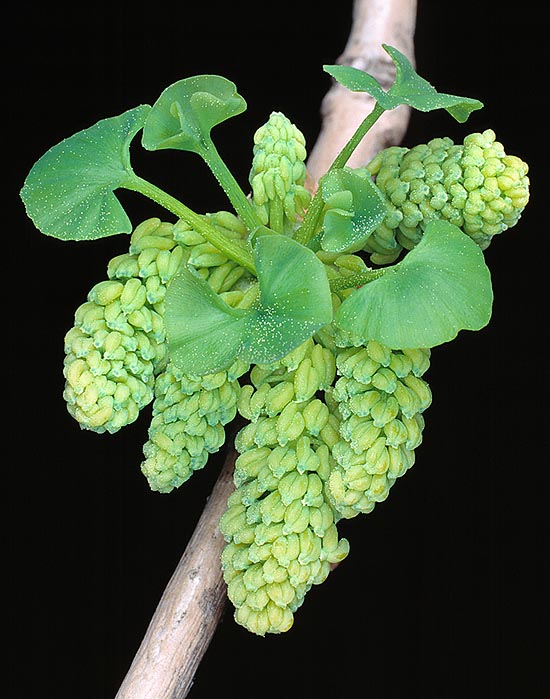 The wood is of good quality, light and finely grained, yellowish, is comparable to that of the maples but frailer; is suitable for interior furnishings and light constructions, turnery and carving, as well as for getting cellulose.

Leaves united at the apex of reduced brachiblasts or at times solitary, deciduous in winter, with long petiole of (2,5) 3-5 (7) cm, and lamina of a nice bright green colour, consistent and coriaceous, of (3) 5-7 (9) cm, fan-shaped (flabellate), entire or more or less bilobed, cuneate at the base, with parallel nervations, dichotomous, and upper margin often crenate.

The gingko is a dioecious tree with male and female organs on distinct specimens carried at the apex of an elongated petiole. The male ones are arranged along a spiciform, slender and reclined rachis, the female ones on peduncles simple or united in bunches. The marriages take place between June and August. The fecundation is anemophilous, and takes place through spermatozoids (male gametes mobile and ciliate).

The pseudo-fruit is pedunculate, ovoid of 2,5-3 cm, yellowish, often covered by a silvery powder, then yellow-pinkish or more or less brown, after the maturity decaying with fetid and nauseating odour. The pulp is rich of carboxylic acids; in particular butyric acid and other substances which may cause skin irritations such as the gingkolic acid and by the crystalline principle bilobol.

Seed of ivory to white-straw colour, roundish, biconvex, of diameter variable between 1,5 and 2,5 cm, surrounded by a fleshy involucre of tegumentary origin. It is edible and has a taste recalling the almonds or the pine nuts. The propagation, even if it is easy interring the seeds, is agamic by layering done on male specimens for obtaining plants of the same sex, or by grafting.

The ginkgo is a heliophilous species loving the deep and fresh soils of any lithological matrix (preferably siliceous, slightly acidic and with a good sandy component) but adapts also to less favourable situations; furthermore, is resistant to the winds, the intense cold (up to -35 °C), the polluted atmospheres, the dust, and is practically immune to adversities of biological origin but badly tolerates the pruning. It is mainly diffuse from the plan up to 600 m of altitude. It is very appreciated due to its characteristics of rusticity, the elegant shape and the splendid golden yellow colour the leaves get in autumn before falling down. In Europe, the first cultivation took place in the year 1727 in the Botanic Garden of Utrecht, Holland, whilst in England was planted in 1754 in the famous Royal Botanic Gardens of Kew a specimen still alive.

It is considered an ornamental plant of first quality for parks, gardens and as road tree; through the time they have selected various ornamental varieties such as the laciniata, variegata, pendula, fastigiata, etc., and are clearly preferred the male specimens in order to avoid the production of pseudo-fruits that, we repeat, have ripe nauseating pulp. 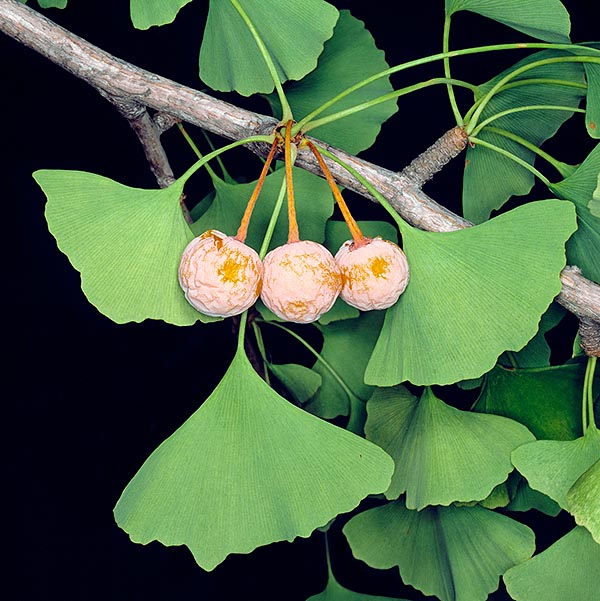 The female ones, even if not fecundated (and here is the big diversity with the flower plants) produce pseudo-fruits, similar to yellow cherries, with nauseating odour © Giuseppe Mazza

In the Chinese medicine the employment of the leaves for treating various malfunctions of the circulatory system is known since centuries (in the origin countries the famous “barefoot doctors” used them for preparing the “tanakan”, medicinal elixir suitable to treat the vascular disorders) and in the last years have been revalued also in the western countries (Ginkgo folium Ph Eur); these contain flavonoids (flavonoglycosides of the campherol and of the quercitin, biflavonoids (bilobetin, ginkgetin, amentoflavone), of terpenes (ginkgolide A, B, C, M, J,), the sesquiterpenic lactone bilobalide, proanthocyanidins, ginkgolic acid (skin irritants and allergens but almost absent in the dried extract).

The buds are very rich of flavonoids. The properties of the foliar phytocomplex are manifold; antispasmodic, anti-inflammatory, antiallergenic, hypocholesterolemic, antiviral, diuretic, anti-thromboflebitic, vasoregulatory (vasodilatory of the arteries and vasoconstrictive of the veins), strengthening of blood capillares, activators of the cellular metabolism, contrasting the prostatic hypertrophy, active against the bronchial diseases with bronchospasm, etc.

Recent studies have proven that the extract of the leaves (GBE or Egb 761) favours the formation of new neurons and new connexions with the hippocampus and this leads to slow down the loss of memory and other analogous problems connected with the senile dementia (Alzheimer’s disease and vascular dementia), with simultaneous strengthening of the blood vessels and of the microcirculation, of the production of platelets and reduction of the free radicals. They are employed especially in the seniors in the treatment of the cases of cerebral circulatory insufficiency, in the symptoms of the dementia with problems of memory and concentration, depression, vertigoes and tinnitus, in the recovery treatments after stroke cases. Moreover, they act on the nervous system decreasing the viscosity of the blood with increase of the velocity of flux, enhancing also the vasal tone. Due to the possible interactions with other medicines (anticoagulants, aspirin, ticlopidine, thiazidic diuretics, pentoxifylline, caffeine, thrombolytics, etc.), the therapies based on leaves of Gingko biloba must be followed by the doctor.