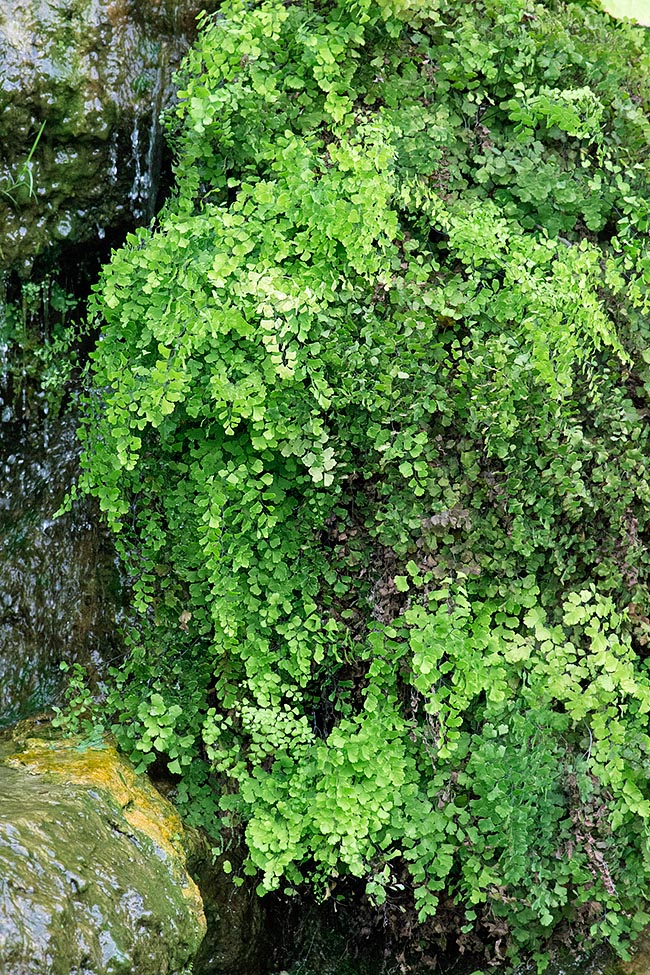 Adiantum capillus-veneris is the only European fern belonging to this genus. It grows on the humid rocks, mainly calcareous, in caves, old walls, sources and resurgences edges, careless of the drops of water © Giuseppe Mazza

The terrestrial plants with dominance of the sporophyte on the gametophyte, equipped with vascular tissues and that reproduce by means of spores are called Vascular cryptogams, also called Pteridophytes (Pteridophyta, from the Greek  “πτερίς“ (pteris) , meaning fern).

They represent a fundamental stage of the evolution of the vegetables being plants of very ancient origin that appeared in the Early Devonian that became dominant by the end of the Mesozoic.

The taxonomic division Pteridophyta, traditionally formed by ferns, lycopods and horsetails, after modern taxonomic studies is not considered valid because these taxa are not linked by direct phylogenetic relationships.

Adiantum capillus-veneris L. 1753, well known as Maidenhair fern or Venus’s hair fern, belongs to the big family Pteridaceae, formed by more than 50 genera and the genus Adiantum is formed by about 250 species of ferns mainly native to the warm regions, most of them of the American, continent, others of the temperate regions.

The Maidenhair fern is the only species present in the spontaneous state in Europe, a very elegant and delicate fern present in various regions like southern Europe, the Atlantic coasts touched by the Gulf Stream up to Ireland.

It is present in the regions of the southern alpine valleys and in all the tropical belts of Eurasia, of Africa and of Central and South America and Australia.

In Europe is also reported Adiantum hispidum (native to the tropical zones and subtropical Australia, naturalized in the Açores Islands) and Adiantum raddianum (of eastern South America), cultivated as ornamental plant and at times made wild.

The generic name originates from the Greek term “adíanton”, formed by  “a”, without, and “diáino”, I wet, better, “I don’t get wet”, referring to the leaves that, immersed and extracted from the water do not get wet (water-repellent). The specific name stands for hair, “capillus” and from the genitive “Venus”, Venus, as this goddess, after the Greek mythology, had her hair dry once out from the sea.

They are terrestrial or epilithic plants, 10-40 (50) cm tall plants with creeping rhizomes, slender, with brown, dense, lanceolate scales and with entire margins.

In the young rhizomes stands an amphiphloic siphonostele (the phloem is on both sides of the xylem), whilst in the oldest ones we have the typical “vascular holed tube” (dictyostele), typical of most of ferns, due to the presence of the foliar traces. From the rhizomes develop adventitious roots each differentiated in epidermis, cortex and central vascular cylinder. The epidermis is the outermost layer and bears unicellular radical hairs. 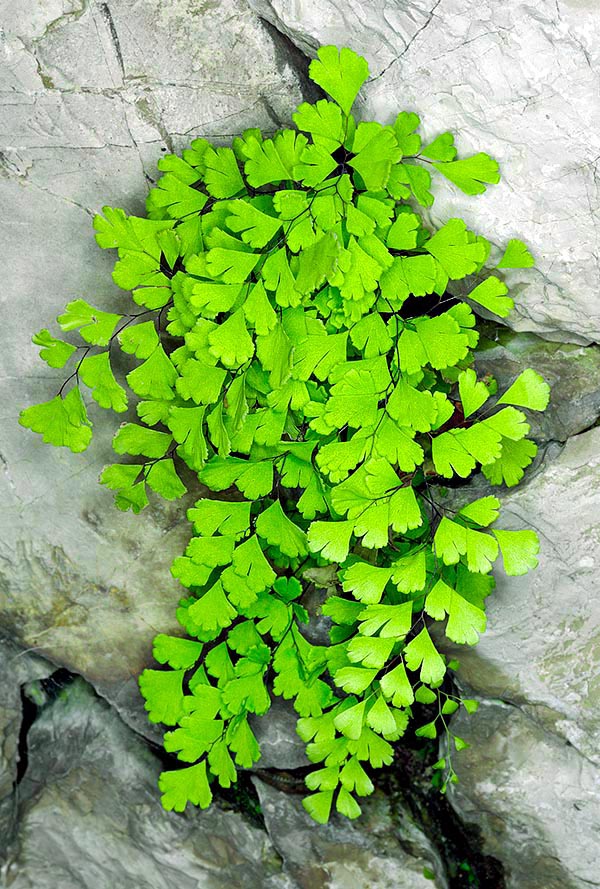 The cortex is subdivided in an ample outer parenchymatous layer and an inner thin sclerenchymatous one.

The central cylinder is formed by simple stele, diarca with xylem at the centre and with phloema on both sides.

The fronds, up to 60 cm long, are loose or close to the rachis that, normally, is slightly zigzagging, of black brown colour, glossy, slender, and with the base covered by the same scales as the rhizome, but distally glabrous.

The pinnae are 3-5 per side, obliquely ascending, with up to 15 mm petiole, with the same colour as the rachis.

The pinnae of the second pair upwards are similar but progressively smaller.

The pinnae are divided in pinnulae, in number of 2-4 pairs per pinna, alternate, obliquely ascendant with brown-black 1-2 mm stem, thin.

The lamina, in the basal pair, is slightly bigger, 12-20 x 10-15 mm, of a rather tender (herbaceous) consistence, green or brown-dark green, with both surfaces glabrous and cuneate base, entire sides, rounded upper margin, 2-4 lobed or divided in branchy segments.

The pinnulae contain cells with chloroplasts and the stomata are present only in the lower epidermis. The mesophyll is not differentiated in palisade and lacunose.

The vascular bundle is surrounded by a sclerenchymatous sheath.

The sterile pinnulae have an obtuse apex, with marginal teeth wide triangular, the fertile ones with blunt apex, flat or slightly depressed, entire or with teeth. The veins, visible on both paginae, are biforked and reach the margins.

The sori are 3-10 per pinnula and stand on the apices of the lobes of the upper margin with pseudo indusium, yellowish green when young then, later on, brownish, strictly reniform, membranous with upper margins flat and straight, entire, persistent.

At maturity the plant, that is a sporophyte, produces finely granular spores on the surface that measure mostly a diametre of 40-50 µm . The sporification occurs practically during the whole year but is normally concentrated from June to August.

The spores are produced in the sporangia inside the sori. 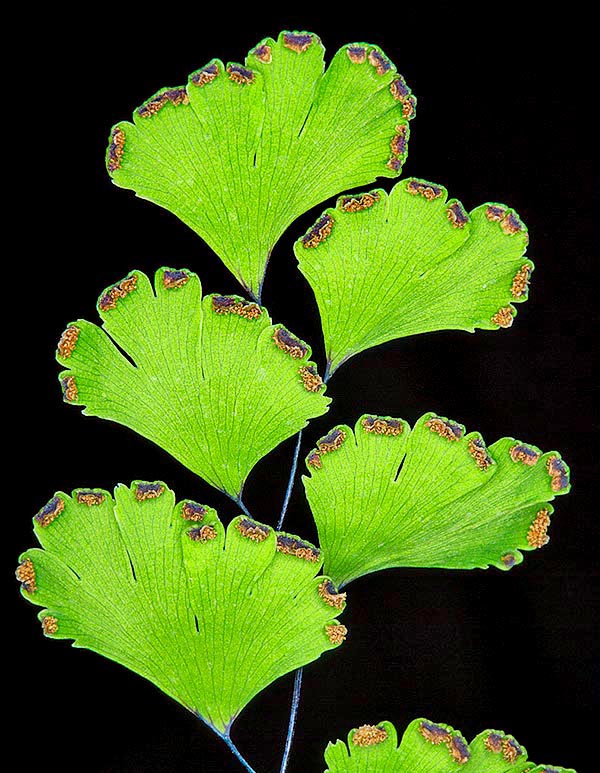 Sporification occurs almost all the year round, mainly from June to August © Giuseppe Mazza

The sporangium comes from one single cell, (leptosporangium) and is formed by a multicellular axis and one spherical or elliptical, inside which form, by meiosis, several haploid cells.

The capsule has the wall shaped like a ring with one side thick and the other one thin. When mature the thin wall breaks and the cells are released by explosion.

From the antheridia get out the multiflagellate gametes (antherozoids) that go swimming in the water  and reach the oosphere inside the archegonium to complete the fecundation originating the zygote (2n) that represents the first cell of the sporophytic generation.

The zygote develops in embryo that nourishes at the expense of the prothallium, to which remains attached be means of a foot and later differentiates in the adult plant (sporophyte) that will produce the spores to begin again the cycle that is haplodiplontic.

The haploid chromosome number is n=30, the diploid 2n=60.

Adiantum capillus-veneris is an ombrophilous, hygrophilous and thermophilic species that grows on the stillicidious rocks, humid cliffs especially calcareous marlstones and sandstones, wells, grottoes, sources, old walls, borders of troughs, ditches and their bridges, from the plain up to 1500 m of altitudes but in the Asian tropical zones it may reach the 2800 m.

About this matter, the Teacher Pierina Boranga wrote in one of the booklets of her splendid series “Nature and the Child” (1951).

“It prefers the position allowing it to enjoy some faint glimmer of sunshine, but often it lives well even in that greenish mild light of the shady walls and of the humid grottoes. It does not matter if its branchlets and the tiny and pretty fan-shaped leaves, supported by thin glossy and black petioles, thin like hairs, will always have to be moving under the dripping of the drops. The small peduncles, though thin, are resistant and elastic and the leaflets have the property of not getting wet. On the contrary, the continuous movement adds grace to these elegant tiny soft fronds that make the stones gentler, giving the sites a touch of Arcadian beauty “.

Since ancient times this fern did not go unnoticed, on the contrary, seeing its love for the poorly luminous locations, it was dedicated to Pluto. Theotricus tells that together with other plants it grew close to the source where one of the Argonauts took the water for his vessel. 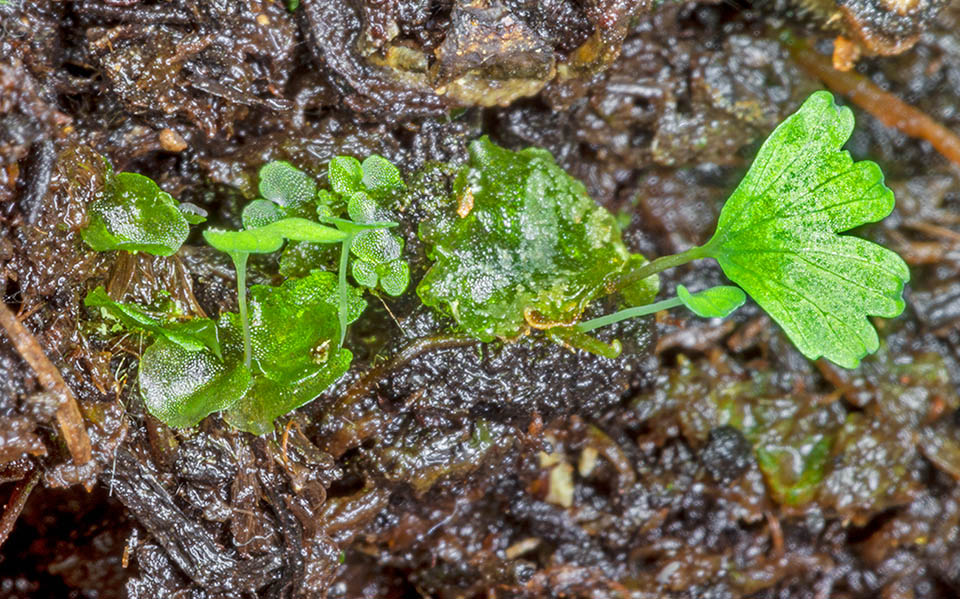 From the fallen spores generate ephemeral plants, the heart-shaped prothallia. On the lower pagina form the flagellate male gametes and the egg cells. The surrounding veil of water renders possible the fecundation and the birth of the final plants. In the magnification note some prothallia and the sporophytes still in the juvenile phase © Giuseppe Mazza

The fronds of the Maidenhair fern, that are to be collected in summer, contain several active principles, responsible also of its beneficial properties. These are phenols, such as the adiantone, mucilage, triterpenoids, tannins, sulfate esters of the hydroxycinnamic acid, gums, sugars, essential oils and alicyclic acids. The essential oil that confers the preparations, especially infusions, dyrups and tinctures, has anti inflammatory, aromatic, galactological, astringent, biliary fluidificant, decongestant, diaphoretic, emollient, expectorant, digestive, etc., properties.

The Maidenhair fern is effective for regulating the menstruation, the dysmenorrhea and to facilitate delivery.  In the popular medicine it is also utilized for managing various diseases such as boils, diabetes, urinary insufficiency and hepatitis. It is also recommended in various ailments of the respiratory tract as fluidifying and soothing, in the voice lowerings (the great tenor, Caruso, like other great singers gargled with maidenhair infusions before entering the scene), in the difficult digestions, as blood purifier, internal antihemorrhagic, and useful for reducing the urge to drink alcohol and to smoke. 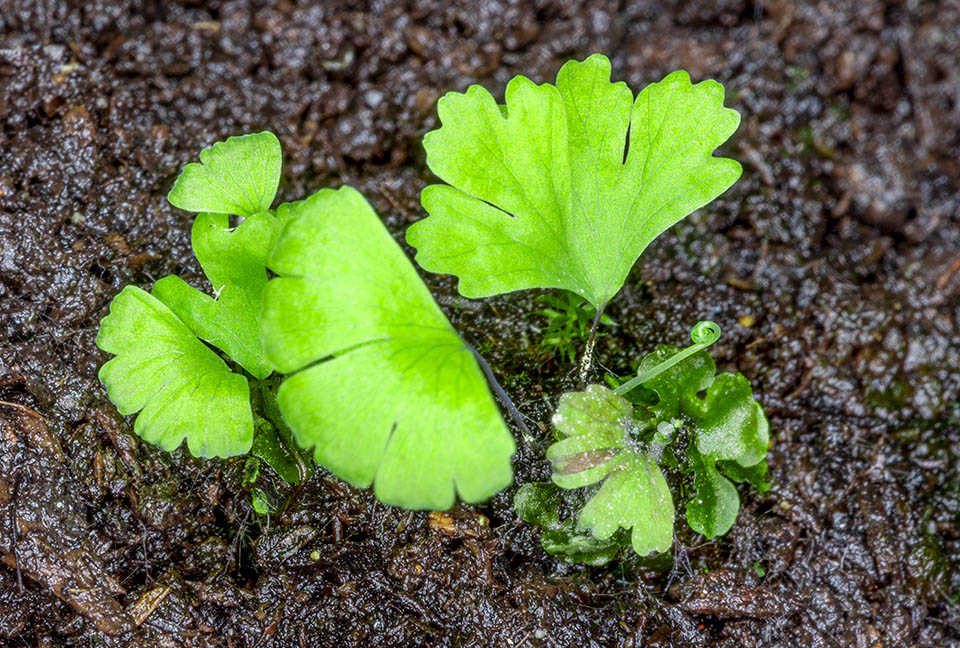 Following stage with growing seedlings and the prothallia (gametophytes), that originated them, in degeneration © Giuseppe Mazza

Phytochemical studies on the whole plant have led to the isolation and the identification of the structure of many compounds such as triterpenoids, flavonoids, phenylpropanoids, alicyclic oleananes and carotenoids. The fronds have been pharmacologically studied for various activities like antibacterial activities, antihyperglycemic, antiviral, etc. and all these substances can be utilized to create new drugs.

The traditional medicine, for the bronchitis and dry coughs, suggests one teaspoon of fresh fronds in  a cup of warm water, after filtering and addition of some honey, in the measure of two-three  cups per day. If we add some black tea and milk we get a tasty infusion known as “Bavarian”.

To the kids with bronchitis and dry coughs may be administered two spoons three times a day of a syrup obtained with 640 g of sugar added to an already filtered infusion, prepared with 340 grams of water and 20 g of fresh fronds 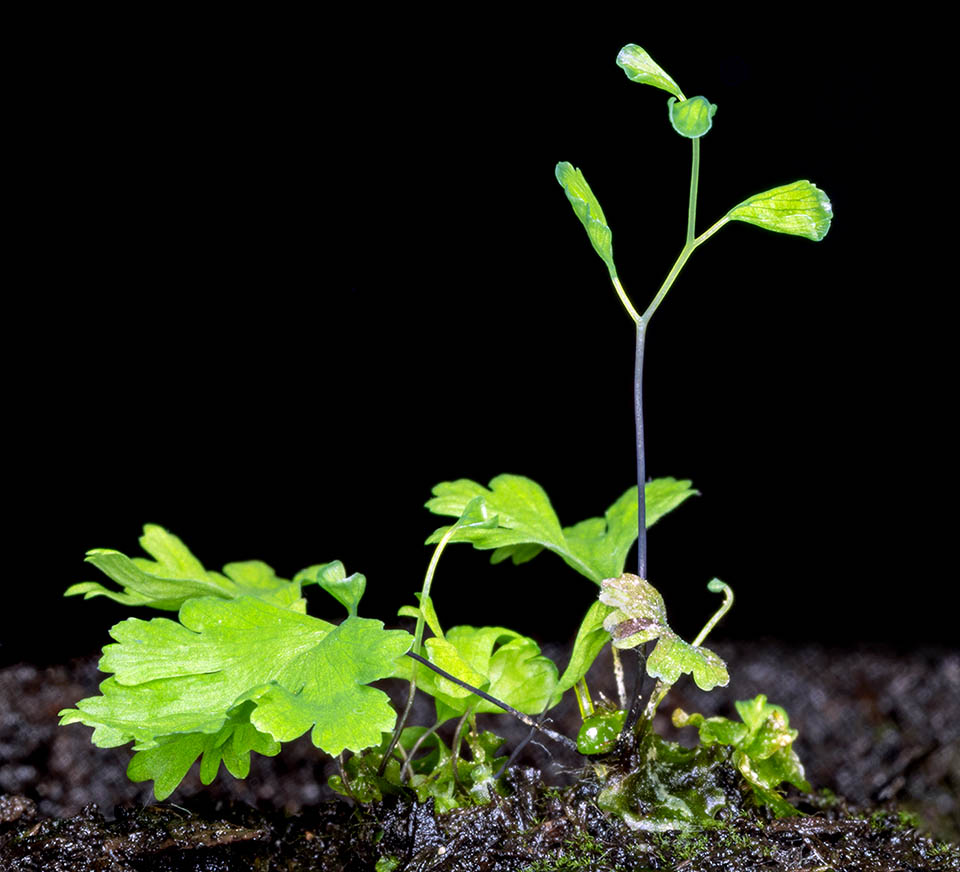 After 25 days the seedlings look like this. On the right a frond with forming laminae on a long petiole of dark colour © Giuseppe Mazza

For external use the decoction of Maidenhair fern has a stimulating action on the piliferous  follicles and therefore is useful for fighting against dandruff and hair loss. One more confirmation of the doctrine of the segnatures? The belief after which our good Lord has put a trace in the appearance and on the characteristics of the plants for indicating the men what they were used for. Thus, the Willow (Salix alba), that grows with its feet in the water, treats the colds illnesses, the fruits of the Common walnut (Juglans regia) due to their shape, the brain, and the Lungwort (Pulmonaria officinalis) due to the drawings on its leaves, the lungs. Yore, the maidenhair fern entered also into complicated preparations intended for curing paralyses, tremors, melancholies, like in the very old Opopira of the Saints Cosma and Damian, and of Mesue.

Thanks to the elegant beauty, this fern, as well as other exotic congeners (Adiantum caudatum, Adiantum rubellum, Adiantum pedatum, Adiantum venustum, etc.),  is widely cultivated mainly as indoor plant; it is however a delicate and demanding species requiring diffused light and does not love the direct rays of the sun as well as currents of cold air; the ideal temperature for its cultivation is of 14-18 °C. 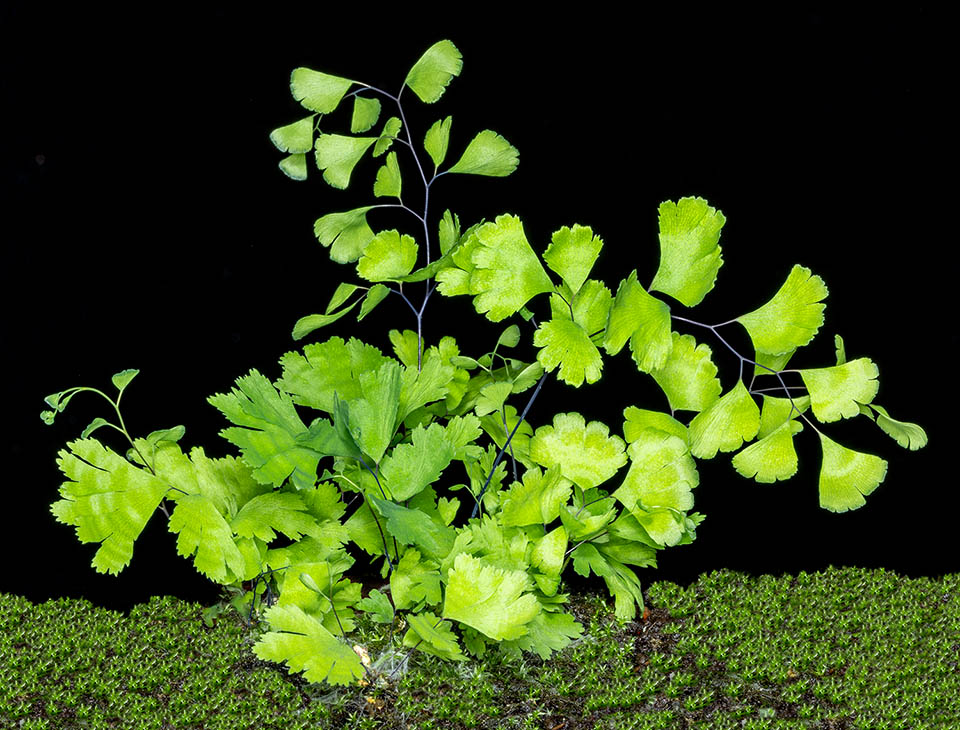 After about 100 days from the planting of the spores, the seedlings have fronds well differentiated ready to form the spores to start the cycle again © Giuseppe Mazza

The substratum must be formed by neutral wood ground or slightly calcareous, enriched with peat, well drained and not too rich in nutrients; waterings will have to be frequent but not abundant during the warm months and will be reduced in winter. The Maidenhair fern reproduces by subdivision of tufts in March-April or by spores, particularly in the nurseries, in order to obtain a great number of plants.