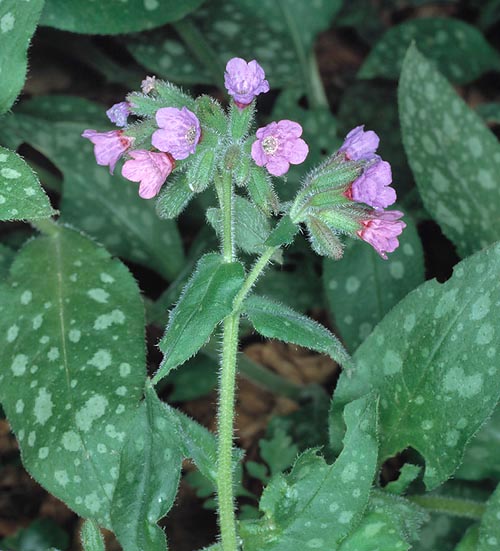 The species is native to Europe (Albania, Austria, Belarus, Belgium, Bosnia and Herzegovina, Bulgaria, Croatia, Czech Republic, Denmark, Estonia, France, Germany, Greece, Italy, Lithuania, Netherlands, Macedonia, Poland, Rumania, Russia, Serbia, Slovakia, Switzerland and Ukraine), where it grows in the hilly and mountainous zones. It prefers humid and shady locations, with soils rich of humus. It is found in the woods and in the bushes, close to creeks and sources, in the lawns and in the pastures, along the edges of the woods, but also in anthropized environments.

The name comes from the Latin “pulmo, -onis” = lung, due to the presence of the dots on the foliar lamina recalling the look of a lung; the Latin name of the species “officinalis” = officinal, concerning the pharmacy. After the Doctrine of the Signatures, which had great relevance in the XVI century and as leading figure the Swiss physician Paracelsus, God has placed on the plants He has created a mark which reminds the organ the plant is capable to treat.

The Pulmonaria officinalis L. (1753) is a perennial herbaceous plant, from 10 to 40 cm tall. It has a fleshy rhizome, ramified, creeping, from which develop the rosette of basal leaves and the erect and simple stems. The plant is more or less hairy and glandulous in every part. The leaves have an oval-elliptic lamina, with sharp apex and entire margin, 4-16 cm broad and 2,5-10 cm long. The basal leaves have a long petiole at times slightly winged, whilst the upper leaves are sessile. The upper lamina of the leaves has usually a white maculation. It has flowers united in 1-2 inflorescences from 20 to 40 cm long. The calyx is tubular and has five triangular teeth. The corolla, 12-20 mm long, has the petals merged in the lower part and widens up as a funnel, ending in 5 oval lobes. Reddish before the flowering, later on becomes light blue-violaceous and finally, whitish in phase of withering. 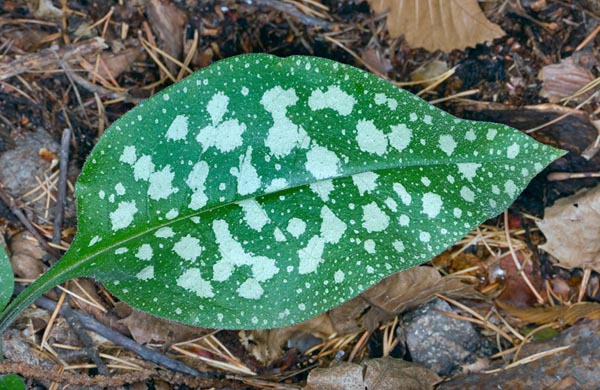 The fruit is composed by four oval achenes enclosed into the calyx which elongates while ripening.

Since always, the Pulmonaria is a plant appreciated in the culture and in the popular medicine.

The young leaves and the flowered tops are harvested before the flowering, to which are ascribed sudorific, vitaminizing, and emollient properties.

It is utilized as cough remedy and expectorant in case of coughing and as emollient in the inflammations of the mouth and the throat as well as in case of hoarseness and decrease of voice.

The use in cooking is limited to the consummation of the young leaves, rich of minerals, in the spring soups.

The genus Pulmonaria is still now object of study by botanists, due to the difficulty in determining the various species.

→ To appreciate the biodiversity within the BORAGINACEAE family please click here.

Pulmonaria officinalis was last modified: May 3rd, 2018 by Giuseppe Mazza