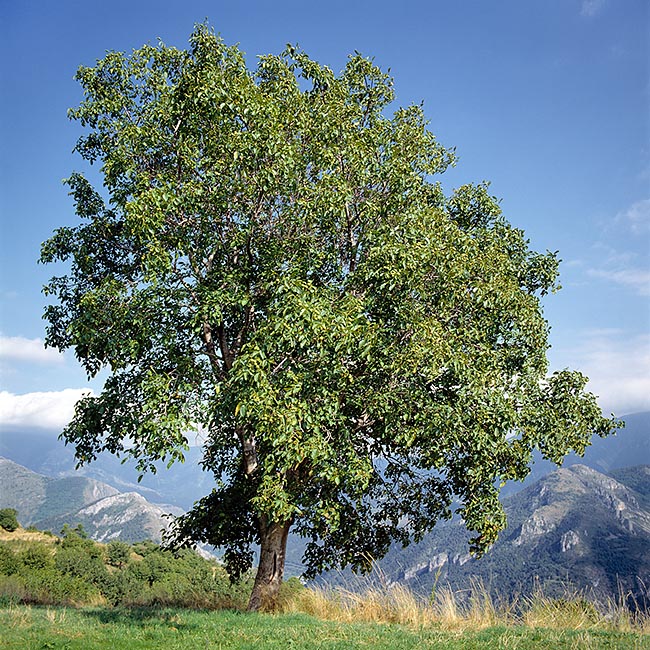 The genus Juglans includes 15 to 20 (<30) species (depending on different Authors) mainly diffused in North and South America, Japan and Pacific Oceanic Asia, besides numerous hybrids.

The country of origin of the common walnut is not precisely known, some Authors hypothesize in India, others in Greece, on the Caucasus and in the Balkan Peninsula, others generically in south-western Asia.

Since the ancient times, it has been introduced and cultivated in Europe and on other continents where it often has naturalized.

The term Juglans is an abbreviation of the Latin terms “Jovis”, “Jupiter”, Jupiter, and “glans”, glans, acorn, that is, Jupiter’s acorn, due to the good taste in respect to the acorns of the oaks consumed by the early peoples.

The name of the species “regia”, Latin, comes from “regius”, regal, that is, tree of the kings, due to the valued production of fruits and wood.

The rooting system is rather superficial. Brown small branches, robust, with septate medulla internally, with ample heart-shaped foliar scars and large apical gemma. Leaves with aromatic and fragrant smell, alternate, odd-pinnate, composed by 5-9 sessile segments but the apical, shortly petiolate, elliptic or oblanceolate, the three apical ones of 2-5 x 5-10 cm, the basal ones progressively reduced, entire, briefly acuminate. The leaves, caducous, reach the 35 cm of length, with green laminae and glossy above and pale green below, robust petiole, without stipules and enlarged at the base. 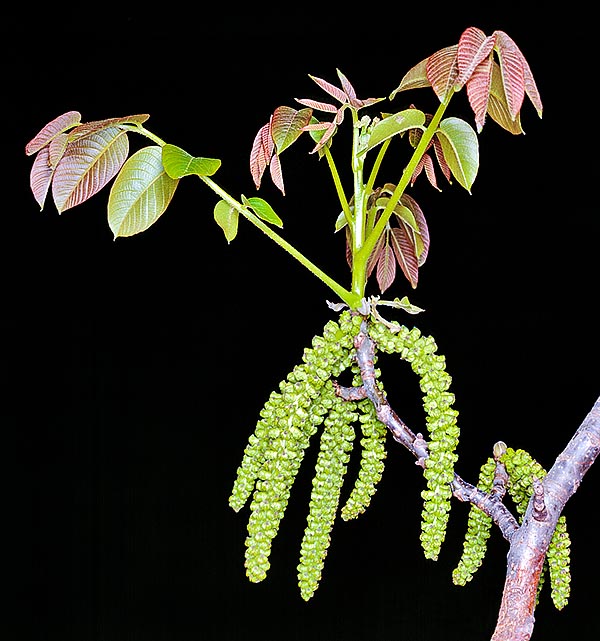 The flowers (April-May) are monoecious, small and inconspicuous and the 5-15 x 1 cm, male ones sessile and drooping, in multicoloured amenta, of green-brown colour, developed on the previous year branches; the female ones, in groups of 1-5, terminal on the current year small branches, and have large stigmas, white, bent outwards. The fruits (nuts) are ovate-globose (3) 4-5 (6) cm, drupes with fleshy epicarp (husk), green, glabrous, dotted by glands, and woody endocarp (shell), ovoid, acute, corrugated and easily divisible in two, protecting the seed (kernel) with 4 brain-shaped lobes, with whitish pulp rich of oil and edible. The common walnut is a rather heliophilous tree of fast juvenile growth, which grows from the plain up to about 1000-1200 metres of altitude and prefers averagely loose soils, fresh, deep and fertile and shuns the acidic, heavy and with water stagnation ones as well as those very arid. Also, it does not tolerate the competition of the herbaceous vegetation (which the adult plants keep far away through the allelopathic action of the leaves falling on the ground and of the roots).

This tree has always had a remarkable economic importance for the wood as well as for the fruits which have fed, along with the chestnuts, the hill and mountain populations. The wood, with grey laburnum and brown-dark or greyish duramen is semi-hard, easy to work, durable (but subject to borers attacks) and prized by colour and variegation, sought after for furniture, slates for floors, works of wood, marquetry and lathe, besides for riffle butts, billiard cue sticks, etc., in particular the marbled burls. However, it is not a good fuel. In the hill and mountain zones it was tradition, upon the birth of each baby-girl to plant a common walnut close to the farmhouse which would have been her dowry at the marriage time.

The common walnut s subject to various adversities especially when growing in not optimal conditions (soils with water stagnations, shady zones, when it suffers injuries at the roots or the collar, etc.), is subject in particular to fungal infections such as Armillaria mellea (honey fungus), root rot or black rot of the collar (Phytophthora cactorum), anthracnosis (Gnomonia juglandis), cankers of the branches (Diplodia juglandis), of bacteria (Agrobacterium tumefaciens, Xanthomonas juglandis) and of insects whose larvae dig holes into the wood (Zeuzera pyrina and Cossus cossus), defoliating larvae (Lymantra dispar), walnut worm (Carpocapsa polmonella), etc. 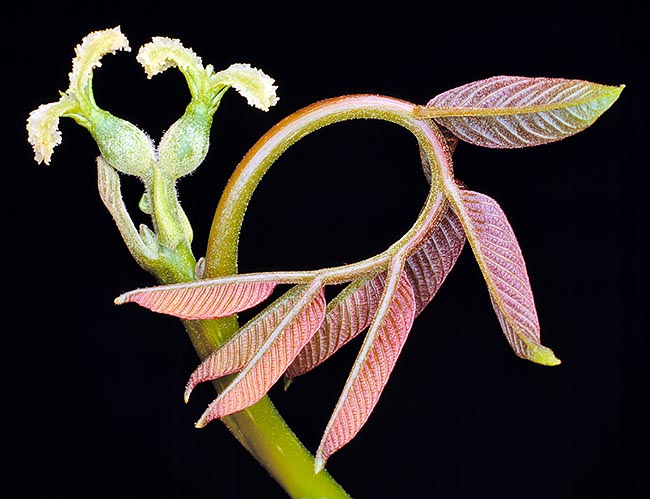 It propagates conserving in winter the ripe fruits without the husk in dry sand which are to be sown from mid March in worked soft ground; after three months the seedlings sprout and can be transplanted after the second year of age.

From selections and crossings they have obtained numerous fruit cultivars which usually are grafted on the “wild”, such as the “Sorrento”, suitable to Mediterranean zones little subject to late frosts, the Californian Hartley and the Serr, the Franquette and the Gustine, French, suitable to the more cool or cold zones, and again Eureka, Lompoc, Midland, etc. The fruits, which ripen from August to September, besides being sold and consumed fresh or dried, are used in the cuisine for sauces and in pastry for nougats, cakes, pastries, decorations, and to extract from them an oil (25%), rich of omega-3 fatty acids, alimentary, medicinal and industrial (when old it is desiccant).

From the bark and the husk they extract tannins and the active principle juglandin which under the action of the air transform in an insoluble and tasteless black substance that can be used for dying fabrics and hair. The decoction of leaves is recommended for antiseptic gargling and sore throat, vaginal astringent against leucorrhoea and ulcers of the cervix; applied in summer on the hair of the animals is a good repellent for the horseflies and pesky insects. Husk, buds and leaves do have astringent, depurative, hypotensive, hypoglycaemic, antibiotic, virustatic on the herpesviruses, digestive, vermifugal, antiseptic and anti-inflammatory of the gastrointestinal infections and of the urogenital tracts.

Clinical studies have shown that the consumption of nuts may reduce the risk of cardiopathies and has anti-degenerative, antioxidant and nutrient action on the brain, because it reduces the concentration of LDL cholesterol and helps in maintaining a good elasticity of the blood vessels. 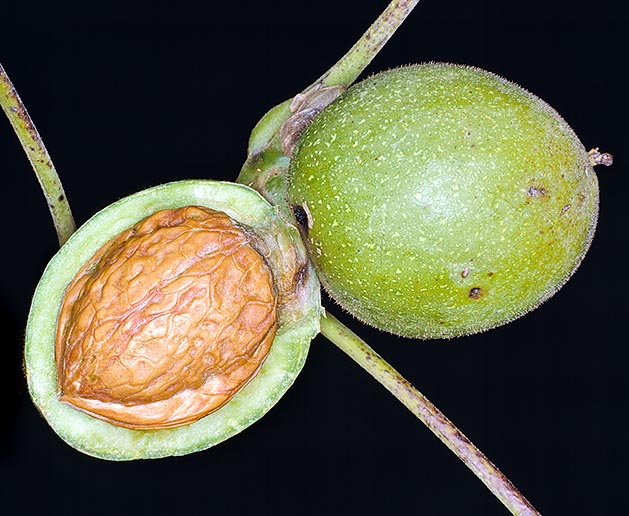 The fruit is a drupe dotted of glands, with fleshy epicarp called husk © Giuseppe Mazza

The leaves, collected at the beginning of the summer, contain a volatile oil, juglone (antibacterial and fungicidal), inosite, tannins, ellagic acid, gallic acid, ascorbic acid (that is, vitamn C).

In phytotherapy, the leaves (collected eliminating the petiole and dried in shade in aerated locations) and the buds, are used in the symptomatic treatment of the venous insufficiency, in the haemorrhoids symptomatology and in the minor diarrheal diseases.

For topical utilization, for preparations against the itching and the flaking dandruff of the scalp.

Four spoons of fresh leaves, or two of dried ones, in one litre of cold water. Make boil over low heat for a quarter of an hour. Drink 4-5 glasses during the day adding lemon juice and some honey.

To boil 30 grams of dried leaves in one litre of water, strain squeezing the residual, filter, and leave to cool. To do a gargling each three hours.

250 grams of nuts with green husk to be cut in four pieces and put in a resealable glass container with a blend of 350 grams of alimentary alcohol at 95° and 250 cl of water (or of dry white wine) to be exposed at the sun for 40 days, shaking every 3-4 days. After this, to add 2 grams of cinnamon bark, 10 seeds of fennel, 10 fresh petals of rose and 5 cloves. Then leave to rest for one week in the dark and filter with a fine gauze or tissue paper, add 150 grams of sugar, shaking until this has dissolved completely and put again in the dark where it must remain “seasoning” for one year. 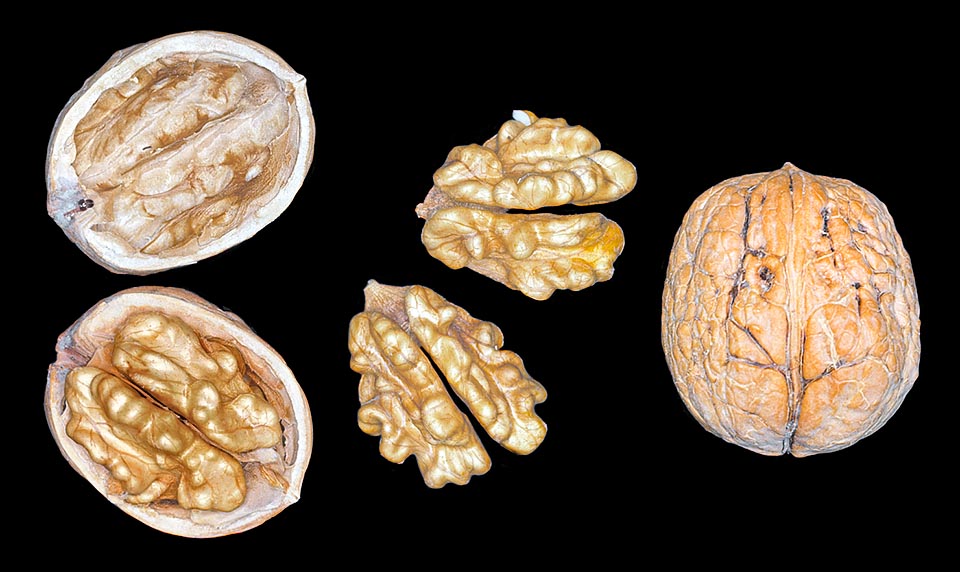 The ovoid shell, acute, corrugated and easy to divide in two, protects the 4 lobed brain-shaped seed, with whitish pulp rich of oil and edible © Giuseppe Mazza

Collect 33 nuts with soft green husk around the end of June (the tradition says they are to be collected on June 24th, St. John, by female hands and cut in four parts with a non metallic instrument in order to avoid the oxidation) and put the pieces obtained in a glass container or equipped with cover with 800-900 gram of sugar. Keep covered, after having periodically mixed, for two days; add then 1 litre of alimentary alcohol at 95°, 3 to 5 cloves according to the taste, a small piece of cinnamon and the yellow outer zest of half organic lemon. Leave the container in a sunny position for 60 days and mix 2-3 times per week. To filter accurately and bottle in dark glass, cork and keep in the cool and in the dark for at least two months before consuming.