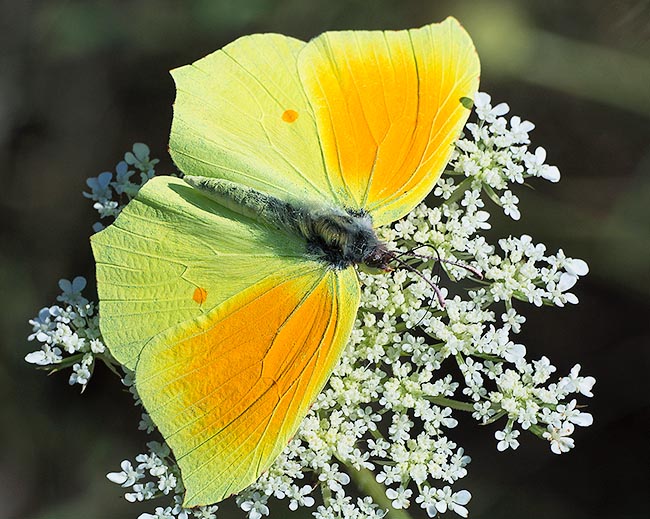 Males of Gonepteryx cleopatra easily distinguish from those of Gonepteryx rhamni due to the two showy orange zones on the fore wings. Conversely, the females of these two species are much similar © Gianfranco Colombo

The Cleopatra (Gonepteryx cleopatra Linnaeus, 1767) belongs to the order of the Lepidoptera and to the family of the Pieridae a fairly vast group including about 1500 species of different sized butterflies, of various colours and present in all continents. In Europe this family includes the so-called “whites”, that is, the cabbage whites, the small whites, the napis and the sinapis.

Along with the congener Common brimstone Gonepteryx rhamni, the Colias and the Anthocharis, they are the only European pierids having colours different from the white on the wings.

The cleopatra is the southern correspondent of the common brimstone and in fact, besides overlapping on vast areas of contact, it takes the upper hand in the southern part of the range.

It is also a butterfly announcing the spring being one of the first lepidopterans to appear with the approaching of the mild season. This is facilitated by the fact that the cleopatra hibernates as imago and therefore is immediately ready to fly as soon as the first spring warmth do begin.

Indeed, its southernmost collocation of the area shared with the Gonepteryx rhamni, often makes it to precede this last one in the spring fly out. It is a butterfly very similar to the common brimstone especially when resting with the wings folded but a soon as spreads its wings to fly away, it clearly shows the great orange spot placed on the upper page of the fore wings. It is perfectly similar to its congener in the flight and in the alimentary habits, as well as in the shape of the wings that have that characteristic angling that has originated the scientific name to their “genus” of belonging.

The etymology of the scientific names rightly takes this particular. Gonepteryx from the Greek “gonia” = angle and “pterux” = wing, literal description of the particular angled shape of the wings. The etymology of cleopatra has, on the contrary, an unpredictable interpretation. Even if the reference to the Queen of Egypt, well known by all because of her love and historical vicissitudes as well as for her beauty and loveliness, would seem to immediately satisfy this question, we must keep well in mind that Linnaeus has always chosen to connect the scientific names he selected to mythological and not historical references. Cleopatra is history, not mythology! Therefore, the Cleopatra he referred to, is the wife of Meleager, he who was able to kill the monstrous and giant boar sent as punishment by Artemis in the country of Calydon. Other references and as confirmation of the names given by Linnaeus to various butterflies relevant to this story are: atalanta the young huntress desired by Meleager, plexippus, piritoo, idas, anceo his companions in the boar hunting and the same meleager.

The European vulgar names given to this butterfly quote in the totality of the cases, the same scientific name Cleopatra, except the French who propose the name of one of the few regions where it can be found: the “Citron de Provence”.

It is a butterfly localized but well distributed always present in large number in the areas of diffusion.

It lives in the southern part of Europe, western North Africa and up to the continental Turkey. Is little diffused and quite rare in the Middle East.

It is totally absent in the areas north to a hypothetic longitudinal line going from the Pyrenees up to Caucasus.

Also in the plains of northern Italy is practically absent whilst suddenly becomes frequent and numerous along the Liguria coasts.

Many subspecies have been classified in particular for specimens living in secluded places (Canary, Madeira, Rhodes, Crete, Balearic Islands) or areas with particular habitats (Libya, Jordan, south of Greece).

It is frequently met in the Mediterranean thicket which appears to be the most suitable habitat for this butterfly. It lives in preferably sparse woods and with open spaces and loves sunny and quite dry locations. It is found up to 1.600/1.700 metres but, being an incessant and strong flyer, it may be accidentally met also at much higher altitudes. Sightings are reported even up to 3.000 m.

Cleopatra is a medium-sized butterfly and may reach the 65 mm of wingspan. The male has the upper face of the wings of a nice sulphur yellow colour with an ample bright orange spot covering almost completely the fore face whilst on the rear one it has a small round and limpid spot of the same tonality. On the back of the fore wing, the orange colour is not visible but in backlight whilst presents on both wings, in the central part, two spots always orange. The female is on the contrary on the recto of the wings, of a whitish yellow colour with a very light and suffused orange striation in the basal area of the lower wing and appears again in the central part of both, an attenuated dot always of orange colour. 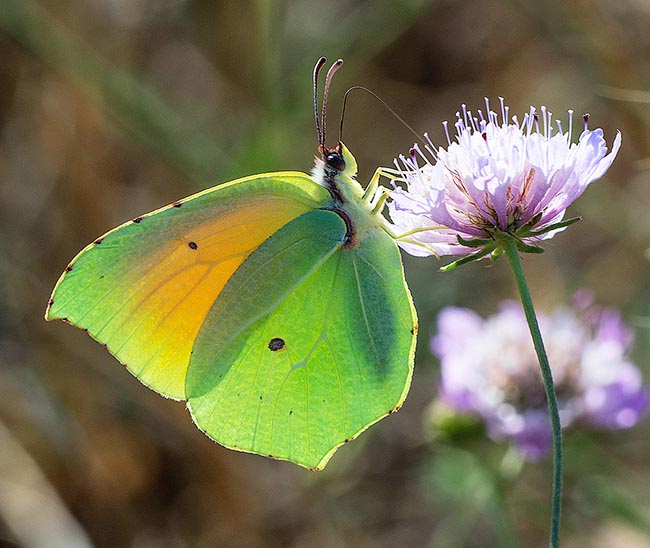 With the wings folded the transparency tells us the sex and therefore, if male, the species © Gianfranco Colombo

The other side gets the same colour of the upper face, with an enhancement of diffused greenish on all the surfaces.

The wings of the cleopatra are angled in the lower apices and this sharp edge creates a slight hint of tail. The whole is much more attenuated than what found in the Gonepteryx rhamni.

The strong and prominent venation this butterfly shows on the verso of the wings is much similar to that of the leaves on which it stays during the rest or the diapause. It is therefore thought that this is due to a natural camouflaging strategy.

The body of both sexes is blackish and covered by a thick greenish yellow down. The antennae are of dark colour, are rather short, very robust and clavate at the apex.

In its northernmost range, the cleopatra is a monovoltine butterfly whilst is usually bivoltine in the warmest zones.

As aforementioned, it hibernates in the status of imago, sheltering during the bad season among the evergreen shrubs clinging to the trees or the rocks, in the crevices and in the cavities but also among the dried leaves fallen on the ground. It has a good winter survival also thanks to the fact that it lives in a southernmost area of its congener common brimstone.

It spawns a few days after the spring flying off usually on the leaves of Mediterranean buckthorn or of other host plants. Usually, it lays one egg only per each location but at times also clusters, but never too numerous. The white eggs are pointed and bent upwards perpendicular to the leaf. The summer generation, when happen, is on the contrary done in the month of July for a late flying away that may take place in September. The caterpillar, when small, keeps hidden on the lower face of the leaf, eating only the cutaneous layer without leaving any trace of its presence on the upper face whilst, when adult, it places, well visible, over the leaf, along the bearing vein, keeping the head slightly arcuate upwards. The caterpillar is greenish with a paler stripe on both sides and reaches the maturity in about 4 weeks.

The chrysalis is initially green, then yellowish and is firmly tied with a silk thread on the small branches of the host plant or anchored under a leaf. Some days before the hatching, it can be easily seen, through the withered cuticle, the orange colour of the fore wings that will be, when flying, the peculiar characteristic of this butterfly. The chrysalis opens after about three weeks. The host plants belong to the genus Rhamnus.