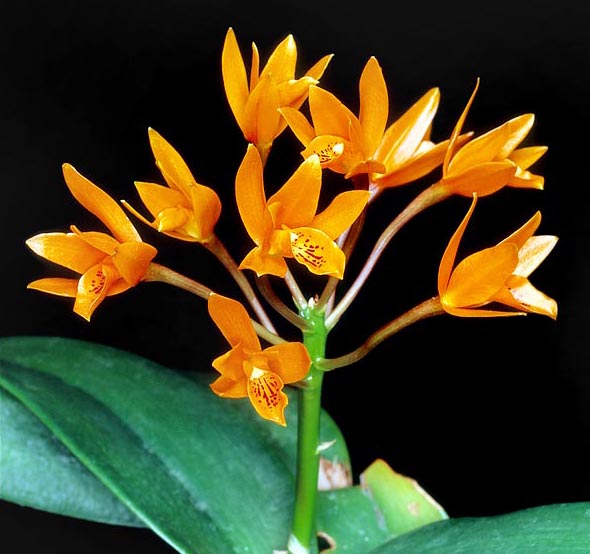 The species is native to Mexico and Central America (Costa Rica, El Salvador, Guatemala, Honduras and Nicaragua), where it grows as epiphytic on the trees of the humid forests or as lithophytic on rocky outcrops, between the 300 and the 1500 m of altitude.

The name of the genus is the combination of “guaria”, term with which the orchids are called in Costa Rica and “anthos” = flower; the name of the species is the female of the Latin adjective “aurantiacus” = of orange colour, with obvious reference.

The Guarianthe aurantiaca (Bateman ex Lindl.) Dressler & W.E.Higgins (2003) is a caespitose, evergreen herbaceous species, with creeping rhizome from which originates by each vegetative season one (two at times) fusiform pseudobulb, up to about 35 cm long, with at the apex two, rarely three, coriaceous leaves from ovate to oblong, 5-18 cm long and 3-6 cm broad, with obtuse apex.

It has a racemose, 6-10 cm long, terminal inflorescence, initially contained in a flat bract (spathe), about 5 cm long, which has the task to protect it in the initial phase of its development, carrying a variable number of small waxy flowers of a colour varying from the orange yellow to the orange red, at times with red or purple dots and stripes in particular on the labellum.

It is capable to self fertilize and this frequently occurs in the plants whose flowers do not completely open. The fruits are ellipsoid, 5 cm long, capsules. It reproduces by seed and by meristem in vitro and, amateurishly, by division, with each section provided of 3-4 pseudobulbs with at least one dormant gem at the base.

Vigorous species and of easy cultivation, it requires high luminosity, also slightly filtered sun, with frequent waterings during the vegetative time, but letting dry well before giving water again, and high local humidity, 80-85%; in autumn-winter the waterings and the humidity are to be reduced, for suiting the resting period, till the vegetative regrowth, marked by the appearance of the new roots.

It appears to be fairly adaptable about the temperatures, seen the vast origin area, from cool to medium-high in summer, 18-32 °C, whilst in winter the lowest temperatures should sway between 10 and 15 °C; a good air movement is essential in all seasons. It is cultivable in pot or in basket with a well draining compost, which may be formed by large fragments of bark, of rock, of jars of clay, of coal or of a mix of them, otherwise, mounted on a raft or pieces of bark; the air movement is important also at the level of roots, which must be able to dry up rapidly, being quite sensitive to the rottenness if in contact with permanently wet material; it adapts also to the semi-hydroponic cultivation.

For the waterings and the nebulisations are to be utilized rainwater or water obtained by reverse osmosis or demineralised water; the fertilizations, appropriately distributed in such a way to eliminate salt accumulations, are to be done during the vegetative period, preferably with balanced hydrosoluble products, with microelements, at half dosage, or less, than what suggested on the package. Division, repotting and mounting on branch or bark are to be done when the new roots do appear.

Classified till 2003 into the genus Cattleya, it has been separated from this and inserted into the new genus as a result from studies done on its DNA. It is amply utilized in the hybridizations to which it confers its intense colours.