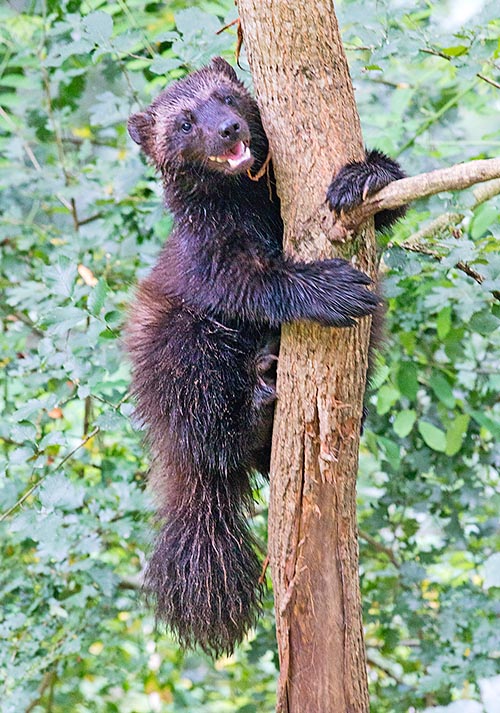 The Glutton or Wolverine (Gulo gulo Linnaeus , 1758) is the biggest terrestrial extant mustelid (the Sea otter, Enhydra lutris, is by far the biggest mustelid) belonging to the order of the Carnivores (Carnivora), to the family of the Mustelids (Mustelidae), to the genus Gulo, to which it belongs as only species, and to the species Gulo gulo.

There are two subspecies with different geographic distribution: the nominal subspecies, Gulo gulo gulo, with Euro-Asian distribution and the subspecies Gulo gulo luscus, distributed in Canada-Alaska. A third subspecies, the Gulo gulo vancouverensis, could be attributed to the specimens living in the Vancouver Island.

The term indicating the species and the genus “gulo” comes from the Latin “gulosus” meaning gluttonous, greedy, as indeed reads the Italian name.

The geographic distribution of the glutton interests the Palearctic and Nearctic boreal belts. The pressure operated by the human species has increasingly pushed the species towards the northern regions of the original range.

Currently, it is present in Europe in the Scandinavian Peninsula (Norway, Sweden and Finland) and in Russia. In Asia it is present in northern Siberia, Mongolia and Manchuria. In North America, it is diffused in Canada, excluding the southern, central-eastern territories and in Alaska. It has been reported also in Greenland.

The habitat of the glutton are the vast forests of conifers, of plain as well as of mountain (taiga), and the prairies of the Arctic regions more or less swampy where is dominant a vegetation of lichens, herbaceous plants and dwarf shrubs (tundra). These habitats still cover remarkable extensions in the northernmost regions of Europe, Asia and America.

In the morphological appearance it recalls a small bear (Ursus spp.). It has a massive and stocky general structure of the body, rather big head and wider on the back but with ample front, relatively long and squared snout with robust mandible and maxilla. 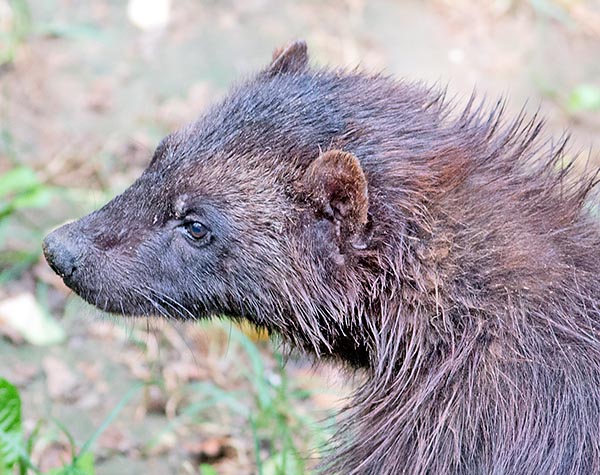 The eyes, of dark brown colour, and the pinnae are rather small. The eyesight is rather scarce. The sense of smelling is much developed.

The tail is short and big, 14-26 cm long. The ample, squared, mouth is equipped with 38 powerful carnivore teeth, the canines are long and sharp; the glutton can crush the femurs of the reindeer and moose.

The fur is quite long, hydrophobic and soft; evenly thick during all seasons. The dominant colour of the fur is the brown-blackish on which stand out a wide pale spot placed between the eyes and the ears which can go down up to the cheeks and a yellowish-cinnamon-golden belt, at times more greyish or tending to brown, extending on the sides of the body, from the shoulder to the tailhead, where it connects with the other of the opposite side. In the paler specimens (American subspecies) this belt is wider and, in front, goes down also under the shoulders. At times is present a whitish spot, sometimes flecked with dark, on the chest. 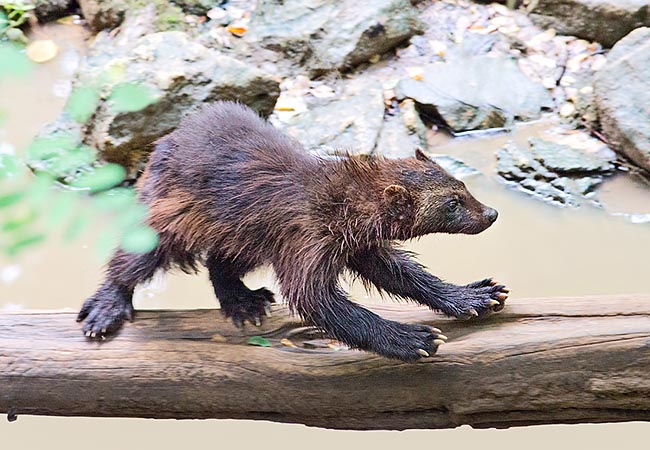 At ease in the tundra, acrobat on trunks, moves fast with leaps, lame at times © Giuseppe Mazza

The snout is very dark brown, whilst the sides of the head, the front and the throat are greyish (or, as seen previously, paler) and the pinnae are edged of pale brown.

The population living in North America has paler fur.

There is no evident sexual dimorphism related to the colouration, but the female is easy to distinguish for the smaller size as well as for the lighter forms.

In proportion to the size, it is a very strong animal with an extraordinarily developed muscular system.

The glutton is a shy, wary and cautious animal of elusive nature. It carries on a solitary life; only in the mating season take form pairs which live together for a few weeks.

Each single individual frequents and utilizes a vast territory (500-1000 square kilometres, around the 200-300 for the females), usually it walks along fixed paths and repeatedly marks various points of own territory with excrements and the glands secretion. Its own territory, however, seen the extension of the same, is not frequented in a stable and rigid way (it can move of 40-50 km per day); also for resting, each time, it uses a shelter or digs a new hole not too deep. 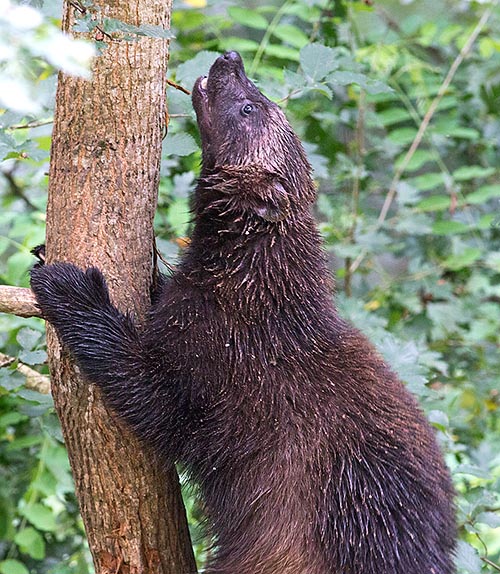 Hides food stocks on the trees, then gets down head first © Giuseppe Mazza

The male allows the access into its own territory to the females only (normally 2-3), the population density is consequently very low.

It is active all the year round. It has does not have strict diurnal habits, as it may move also during the night; throughout the day it alternates periods of activity with others of rest (with average successions of 3-4 hours).

It has mainly terricolous habits, at times shins the trees and is very good in climbing; often, it goes down from the trees “head down”.

As method of deambulation, usually, walks or trots in short jumps, whilst when running it develops a very particular gait developing in long regular leaps which make the animal to seem almost lame.

The ample plantar surfaces and the typical gait allow the glutton to move with ease on snow-covered grounds; only when the snow is high and soft, it meets greater difficulty as, due to its weight, partially sinks into it.

When running, even if not fast (15 km per hour), it shows a remarkable resistance also on the snowed ground. While seeking food it uses all the senses but often does not ambush, in fact it moves noisily with its usual trotting gait. This, obviously, does not allow it to surprise and seize wary and fast animals.

Only in winter, with great snow covers, being able to run silently on the snow with little difficulty, on the long runs, is able to predate even mammals of medium and big size which sink into the snow. It rarely hunts in ambush, lurking in the bushes, on the lowest branches of the trees or on spikes of rock; when the prey is close enough it jumps on its back catching the prey with the robust nails and biting it on the nape. 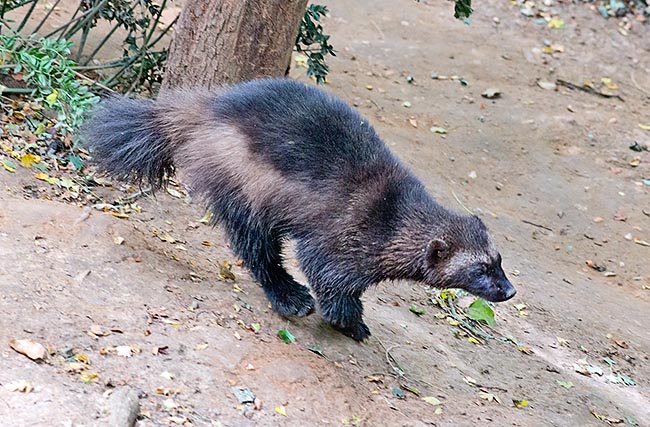 Not too fast but tireless, advantaged by the wide paws it tires the preys who sink in the snow © Giuseppe Mazza

It has alimentary habits very various and diversified in the various seasons.

The alimentation is mainly carnivorous as it often eats carrions (at times also of marine mammals), and thus performing the important ecological role of biologic “scavenger”, or of animals killed also by other predators; the glutton, in fact, is often able to purloin the preys to other carnivores, even to the Puma (Puma concolor) and bears (Ursus spp.).

For stealing the others’ preys, the glutton flaunts attitudes of menace and emits a stinking secretion from the paranal sacs.

These attitudes have earned him the epithet of “northern hyena” or of “beast of the ice”. It seems that the American subspecies (Gulo gulo luscus) steals more preys then the European one (Gulo gulo gulo) more active in the direct hunting.

During the summer, the diet is completed by lemmings (Rodentia), larvae, insects, birds and their eggs, calves of moose (Alces alces) and of reindeer (Rangifer tarandus). In winter, it captures, more frequently, hares, squirrels, moose, reindeer, foxes, other mustelids and even lynxes (Lynx spp.). It manages to predate animals much bigger than itself (moose, reindeer) especially when they are exhausted from frost or blocked by snow and by ice. 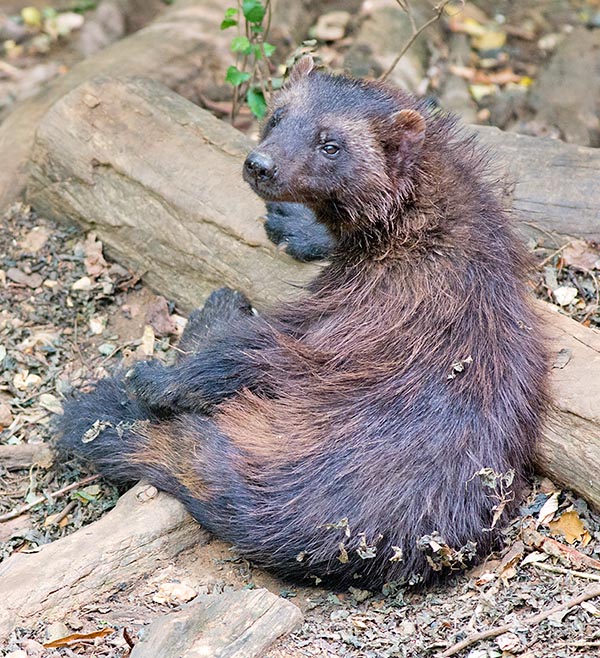 Active all the year, also by night, alternates activity and rest with 3-4 hours cycles © Giuseppe Mazza

The diet includes also a part of food of vegetal origin (buds, berries). During the famine times, it can approach villages and dwellings to plunder whatever food is available. The name of glutton has been given because it has been described while filling of food without being even satiated, up to become deformed (from this should originate the legend that the glutton for getting “empty” and resume eating should pass between two close trees which compress its body).

Contrary to legends and to the common name given to him, the glutton has actually frugal habits and when it catches a prey, it hides it (on trees, in a hole, under stones and bushes) consuming it only when is the case. These pantries are called by the Lapps “tombs of reindeer”.

Excluding the man, there is almost no other predator able to menace the glutton. Only the wolves (Canis lupus), when in pack, they can rarely overwhelm this mustelid which is not appetible (due to the stench emanated). The young gluttons can be predated by the golden eagles (Aquila chrysaetos), pumas (Puma concolor), bears (Ursus spp.), and wolves (Canis lupus). The mating season stands between April and August and the pair which takes form, keeps united for some weeks.

In this species occurs the delayed nesting of the fecundated eggs so much that all the period, from the fecundation to the delivery with in the middle the period of quiescence, lasts for about 9 months (the real embryonic and foetal development is of about 50-60 days).

Before delivering (between February and May), the female looks for a fixed and safe abode, usually in a cavity among the rocks, inside the trunks, in dens of other animals, among the roots of the trees, or burrows directly under the snow. On a bed of herbs and mosses are generally delivered 2-3 (1-5) cubs which at the birth are about 13 cm long and weigh 85-110 g. At the birth, the cubs have the eyes closed and are of sand colour with darker snout, ears and feet. 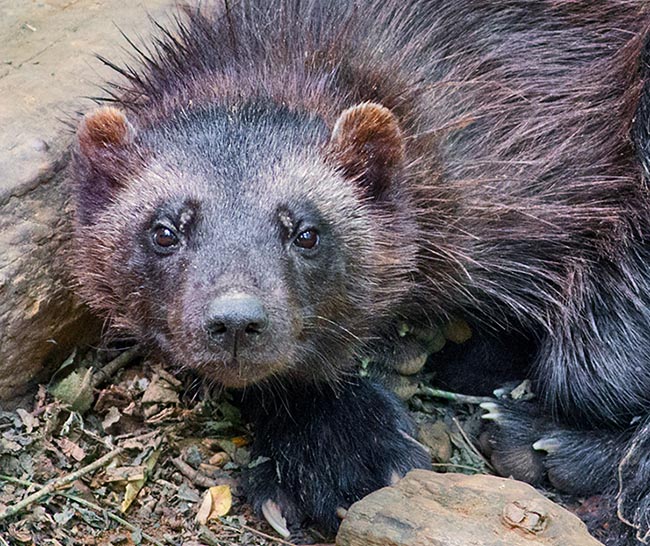 Declining species, hunted for the skin and for the damages to cattle, sensible to climate changes © Giuseppe Mazza

They open their eyes when 3-4 weeks old, for 10 weeks they nourish only of the breast milk, and even if the nursing is continued longer, afterwards the mother gives the progeny pre-chewed food. The female has two pairs of tits and defends the progeny with fury.

When three months the young accompany their mother with whom they will remain for at least one year. Generally, the females deliver every two years. The maturity is reached around the 3-4 years and the lifespan is estimated being around the 15-16 years.

Unfortunately, the glutton is a declining species; it is more present in the regions of the extreme north where the presence of the man is less constant. The species is hunted because considered dangerous for the livestock (reindeer and cattle), sometimes killed in great number (phenomenon of the overkilling), for the skins sought-after by some populations and because considered an evil and inauspicious animal by some Nordic peoples.

Also the hunters of fur animals exterminate it due to the damages it sometimes creates to the traps and to the camps. In many ranges, where they were present in a recent past, the species is extinct. Probably, the species was saved, hitherto, due to the natural scarce density of the population combined with the intelligence typical of the species; the gluttons are more difficult to catch with traps (that they often avoid, they trigger break them) than other species. Unluckily, on this animal, which remains mysterious and fascinating, the new serious world problematic of the climate change is incumbently threatening.