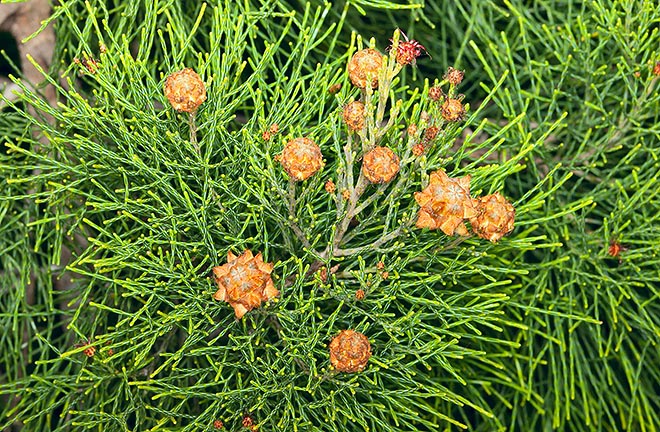 The species is native to Australia (north-eastern Queensland), where it grows on granite outcrops in the pluvial forest, preferably along the banks of water streams, from the sea level up to about 1200 m of altitude; presently, it is present in five locations only.

The name of the genus is the combination of the Greek terms “gymnos” = naked, bare and “stoma” = mouth, with reference to the superficial pores (stomata) along the branches; the Latin name of the species “australianum” = of Australia, indicates its origin place.

The Gymnostoma australianum L.A.S.Johnson (1989) is a small evergreen tree with conical habit, up to about 7 m tall, thickly ramified with thin filiform branches having an almost quadrangular section, of pale green colour, which perform the main photosynthetic function, resembling superficially to the needle-like leaves of the conifers: the leaves are reduced to tiny scales placed along the branches in whorls of four. Unisexual inflorescences on the same plant, male inflorescences in spikes composed by flowers endowed of only one stamen, female globose inflorescences with flower having no calyx and merged corolla and carpels usually containing two ovules. 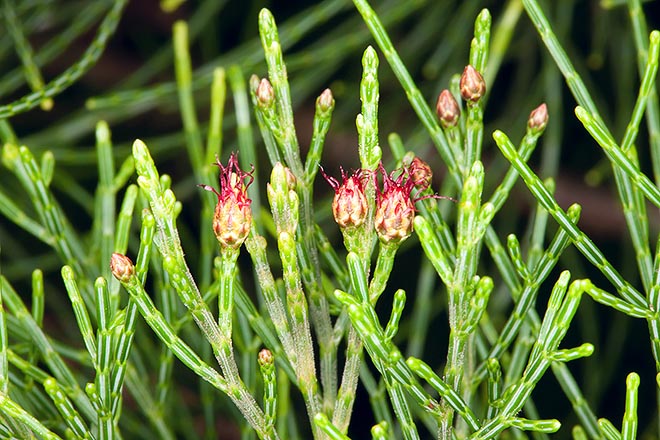 The female inflorescences are globose with flowers without calyx © Giuseppe Mazza

The infructescences are woody structures, similar to the cones of the conifers, with almost cylindrical body, 0,7-1 cm long and 0,8-1 cm broad (excluding the protruding parts), with bracts and bracteoles enclosing the fruits, samaras (a single seed with terminal wing), of pale brown colour about 0,8 cm long; it fructifies abundantly, but only a small part of the seeds is vital, the fruits, in fact, may develop also by parthenocarpy.

In the roots are present nodules which host nitrogen-fixing bacteria.

It reproduces by seed in sandy soil kept humid which germinates in 3-5 weeks at the temperature of 22-24 °C.

The only species of the genus native to Australia, cultivated since the early years of the 2000, is suitable for tropical, subtropical and warm temperate climate zones, where it seems it can resist to temperatures up to -6 °C; it requires full sun or a slight shade and is not particular about the soil. Of relatively fast growth, it can be utilized as isolated specimen, for fences and wind breaking barriers, even close to the sea, besides in the topiarian art, as standing the prunings; it well adapts to the cultivation in pot for the decoration of luminous ambients and open spaces.