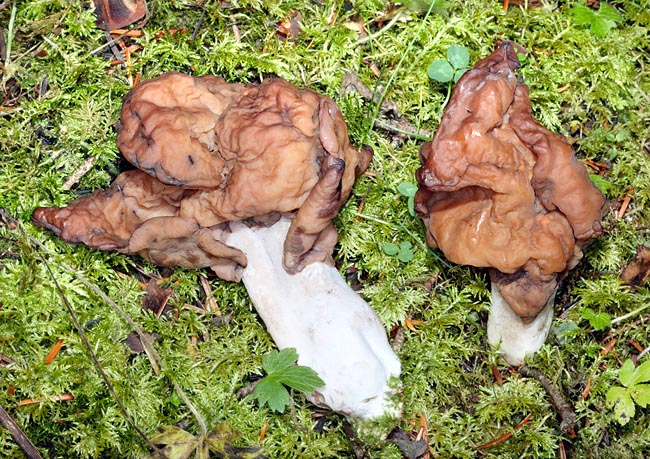 Gyromitra infula is a fungus with pleasant smell and taste, but toxic © Giuseppe Mazza

The epithet “infula” comes from the Latin “infula” = priestly headdress with ribbons, bishops’ mitre, due to its shape.

The genus Gyromitra includes ascomycete fungi of the Northern hemisphere and comprises 18 species. The general characteristics of the genus are: medium or medium-large carpophore, with the mitre of irregular shape, brain-like, saddle-like where the hymenium is placed, of reddish brown colour, or brown amber. The stem is short, squat at times, whitish, smooth, sometimes grooved, hollow. The flesh is frail. White spores, ellipsoidal, from smooth to finely warty. They are all terriculous species which fructify in the conifer woods and/or in broadleaf ones, in spring. 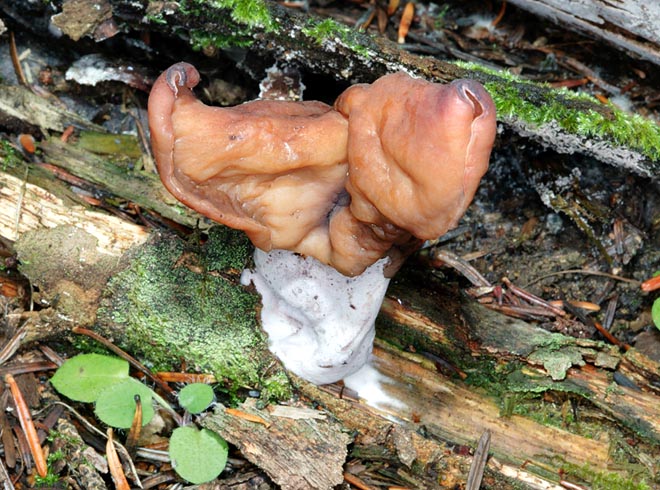 Saprophyte, it grows in conifer or mixed woods, on litter or on woody residuals © Giuseppe Mazza

Cap: formed by a 5-10 cm tall and 5-12 cm broad mitre, formed by 2 to 4 pointed lobes, bent towards the stem and forming a saddle, from corrugated to striped, veined or gibbous; of brown-reddish, brown-cinnamon or dark brown colour, darker with the age, furfuraceous above; the lower surface is pruinose and of paler colour.

Hymenium: hymenophore, placed on the outer part of the mitre, waved, smooth.

Stem: 3-5 x 1,5-2 cm, initially cylindraceous, then compressed and sulcate, pruinose, brown-pale then reddish or grey-lilac, even pale pink, hollow with septa and chambers grooving it inside.

Habitat: saprophyte fungus. It grows in the conifer or mixed woods, on the litter and on woody residuals or in burnt zones, even on sawdust or on hard packed soil, in summer-autumn.

Edibility: toxic; contains gyromitrin, toxin which, when metabolized by the body, is converted into monomethylhydrazine, a volatile hydrazine, component of some fuels for rockets. 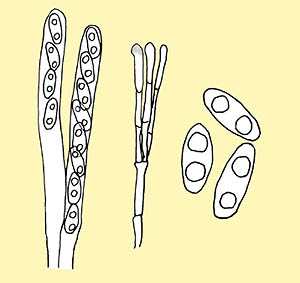 Remarks: it could be mistaken with: Gyromitra esculenta (Persoon) Fries 1849, which however has a rugose surface (brain-like), not waved or irregular like Gyromitra infula; Gyromitra ambigua (P. Karsten) Harmaja 1969, quite similar in the appearance, so much that usually it is not possible to separate the two species without examining their microscopic characteristics, Gyromitra ambigua has the violet tints on the stipe more pronounced and bigger spores, the saddle-like mitre which at times might lead to mistake it with some species of the genus Helvella, but these last usually do have more grey colours and thinner and more grooved lobes.