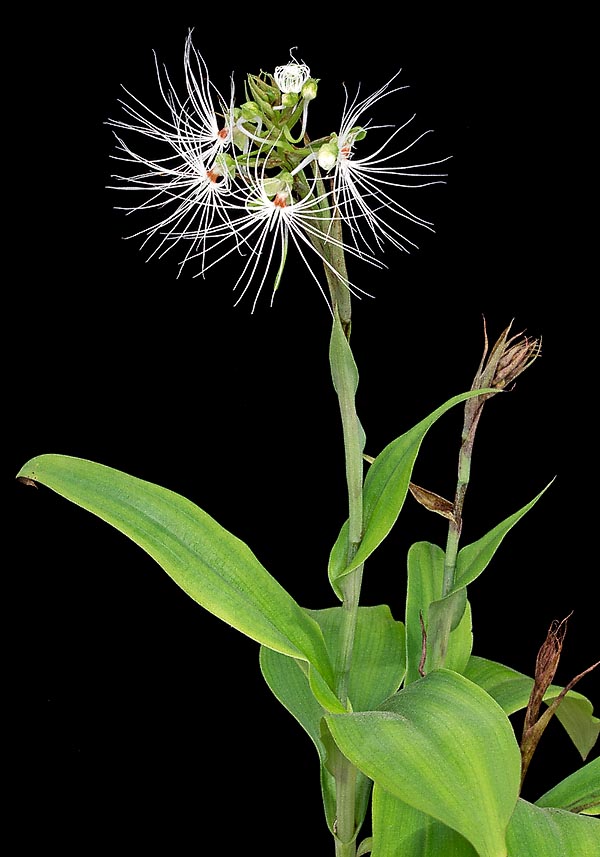 The species is native to Borneo, Java, Sulawesi and Sumatra where it lives in the underwood of the forests, up to about 1000 m of altitude, in zones characterized by monsoonal climate.

The name of the genus comes from the Latin substantive “habena, ae” = rope, lace, with reference to the long and thin divisions of the lateral lobes of the labellum; the name of the species refers to the known character ot the Greek mythology portrayed with a multitude of snakes in lieu of the hairs, with the same reference.

The Habenaria medusa Kraenzl. (1893) is a deciduous terrestrial tuberous species, up to about 20 cm tall, with fleshy roots and 4-5 lanceolate leaves with acute apex, sheathed at the base, 10-15 cm long and 2-2,5 cm broad.

Terminal racemose inflorescences, up to about 30 cm long, bearing 7-10 or more flowers, on a pedicel and ovary 2-3 cm long, long lasting that open gradually, subtended by lanceolate bracts with acuminate apex, 1,5-2,5 cm long and about 3 mm broad.

Unequal green sepals, the dorsal one, 5-7 mm long and 3-4 mm broad, shaped like a hood on the column, the lateral ones stretched, ovate-oblong with acute apex, 7-8 mm long and 4 mm broad.

White petals united at the base of the dorsal sepal, linear with obtuse apex, about 6 mm long and 1 mm broad. Trilobed labellum of white colour with brown red spot at the base, 2-2,5 cm long and 3,5-4 cm broad, with the lateral lobes deeply divided in 36-40 filiform segments (laciniae), radially arranged and minutely ciliate at the margins, linear median lobe, 0,5 cm long, and filiform spur at the base 2,5-3,5 cm long. The tuber that has vegetated dies by the end of the summer after having produced new tubers for the successive cycle.

One of the most known and spectacular species of the genus, due to the beauty of its flowers, but usually deemed of rather difficult cultivation, needing a definite period of rest, that is also the most critical period from the point of view of the water regime being the tubers easily subject to rottenness.

It needs pots, referably in earthenware, fairly capacious and deep to contain the new tubers that form at the end of the vegetative period and very aerated and draining compost, that may be formed by garden earth, leaf mold, coarse sand and agriperlite in equal parts, or other mix having similar characteristics. 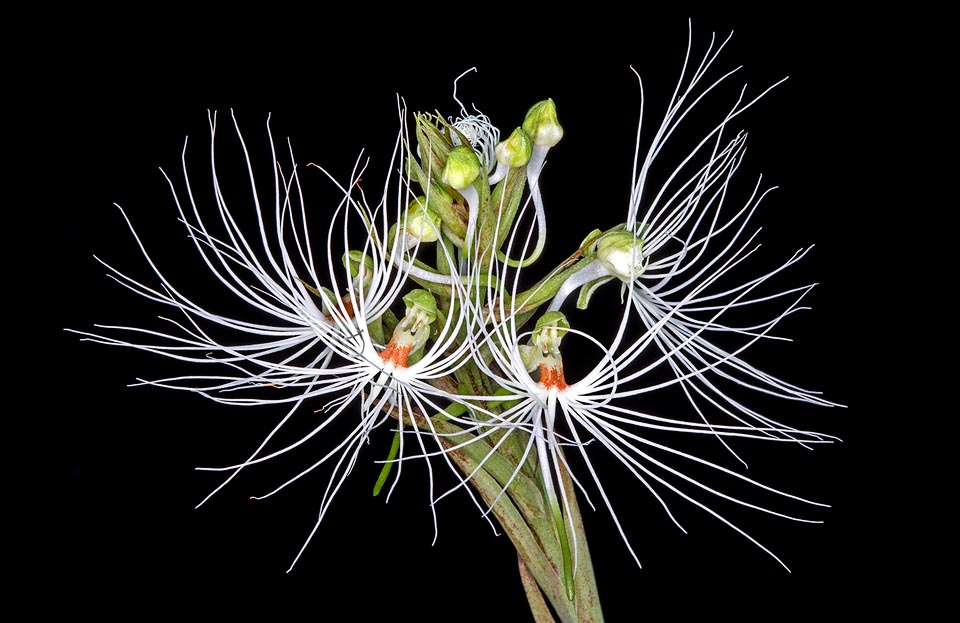 The seasonal cycle begins in spring with the appearance of the new vegetation, from this moment must begin gradually the waterings, avoiding to wet the emerging young leaves, to become regular and abundant in summer, but allowing the substratum to slightly dry up before giving water again. During this period it requires a partially shaded position, averagely high temperatures, between the 18 and 30 °C, humidity of the 75-85% and constant ventilation.

The roots are particularly sensitive to the salts accumulation, therefore the fertilizations are to be duly alternated with the waterings, utilizing hydrosoluble products for orchids very diluted, around the 1/3 - 1/4 of the dosage suggested on the package. 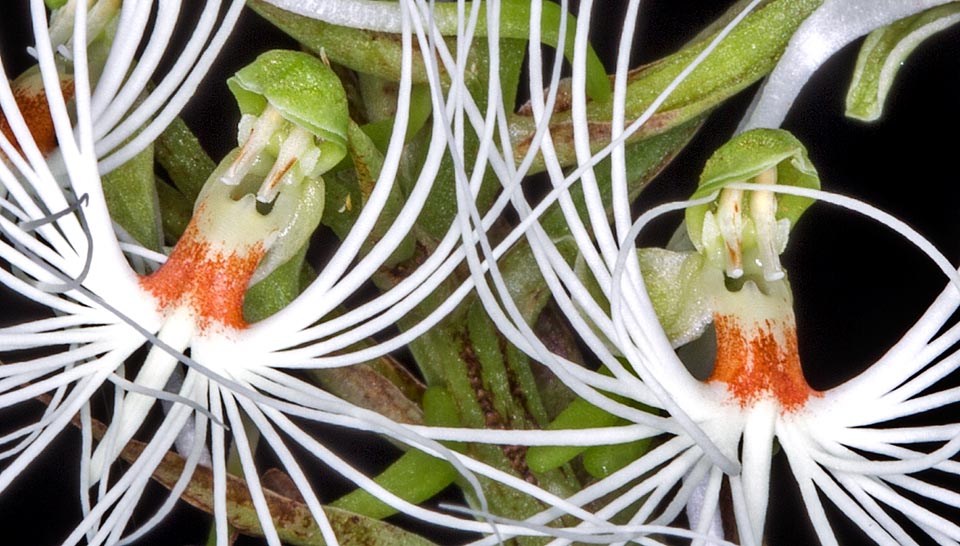 Close-up of the white trilobed labellum with brown red spot at the base. Its cultivation, unfortunately, is not very easy © Giuseppe Mazza

Once the blooming is completed, the leaves begin to dry up and the waterings are to be gradually decreased to stop totally when they are completely dry, limiting to nebulizations of the compost appropriately dosed in way to maintain the compost only just humid to avoid that the tubers dehydrate. Alternatively, they can be taken off from the pot, and eventually divided, and conserved in an aerated place with temperatures around the 16-20 °C in sandy compost maintained slightly humid, as before specified, to be put again in pot, at not more than 1 cm of depth, by the first sign of vegetative regrowth.

The species is recorded in the appendix II of the CITES (species whose trade is internationally ruled).