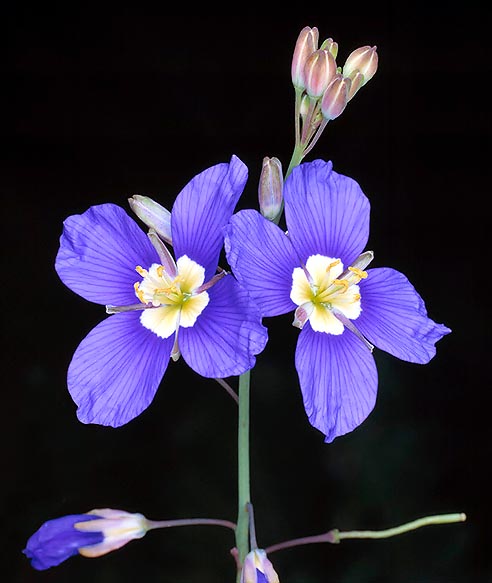 This plant is native to Namibia and South Africa (Northern and Western Cape Provinces), where it grows in sandy, flat areas and also on rocky slops characterized by long drought periods.

The Heliophila coronopifolia L. (1763) is an annual herbaceous plant, up to about 60 cm tall with erect stems, at times tomentose at the base, and 5 cm long, bright green leaves, being the inferior ones pinnatipartite, with 0,6-1 cm long and 2 mm broad, filiform lobes, and the upper ones entire and getting shorter progressively. The inflorescences, in terminal racemes, carry 8 to 16 small flowers with four purplish sepals and 4-lobed corolla of an intense blue colour with white or greenish centre.

The flowers close by night or with overcast and cool weather. The fruits are 3-9 cm long siliquae, thin, containing several round and flat, tiny seeds. It reproduces by seed which may be put in place directly in late winter-early spring which usually germinates in 1-2 weeks.

Plant of fast growth and of easy cultivation, requires an exposition in full sun and well drained soils; watering must be regular during the growing period, even if it may stand, if well rooted, drought periods. Plant with delicate appearance and particularly intense color, it is ideal when utilized in mass for realizing flowerbeds or mixed edges, thanks also to its long blossoming period, from spring to late summer. When in pot, it is advisable to add sand or agri-perlite to the mould for improving the drainage.