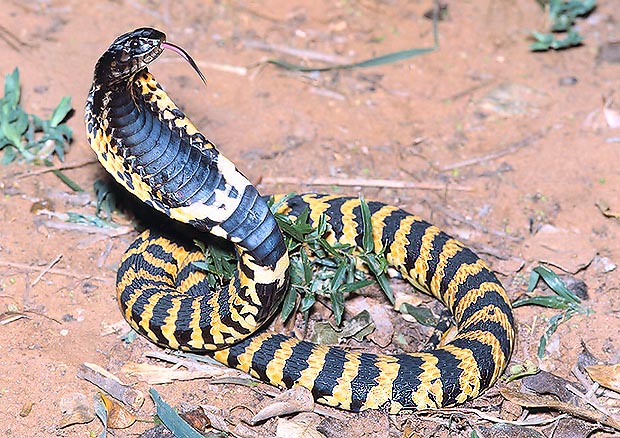 For some, this gorgeous serpent of the family of the Elapids (Elapidae), notwithstanding the impression it can give prima facie when it expands its hood and spits venom (or better, when it emits a spray of droplets), it would not even be a cobra, at least in the strict sense.

Meanwhile, the fact of “spitting” venom is not a characteristic only of cobras (Naja), but, in rare cases, also of other serpents, such as, for instance, the Mangshan pitviper (Zahoermia mangshanensis), a crotalid present only in a limited zone of China, which reaches the 180 cm with a livery streaked in green an black, standing among the most beautiful in the world of the reptiles.

Going back to the rinkhals, we may remark, also at first sight, how its scales are keeled, with a rugged appearance, whilst those of the cobras are smooth.

Furthermore, whilst all other cobras are oviparous, the Hemachatus haemachatus is ovoviviparous, that is to say, it gives birth, like the vipers, to newborns already perfectly formed, not to talk about the absence of solid teeth in the maxilla, but the venom fangs.

In any case, it is a medium sized elapid, usually one metre long, with peaks of 150 cm. It has robust body and keeled scales which, by mid length of the body, are placed in 17-19 oblique rows.

The tail is recognizable and short, the muzzle rather short and pointed, the passage head-neck is, on the contrary, little visible. The head has a pointed and obtuse muzzle.

The colouration is much variable: in many cases the colour of the dorsal part is dark brown or black, with paler speckles or with whitish, yellow or cream transversal bands, often irregular and uneven. Many individuals have a variegated livery, others are wholly black, but almost always, in such cases, there are present one or more pale rings at the level of the neck (from which the common name in English).

A specimen I saw along a trail was of red brick colour.

The eyesight of this serpent is rather poor, and, like many other ophidians (excepting for instance the boomslang and the twig-snake), is not in condition to distinguish well a prey or a foe, if still, therefore the smell (Jacoboson’s organs, to which the bifid tongue conveys the smelling particles perceived in the habitat), plays an important role in the prey’s localization.

Mainly nocturnal, it may be often seen basking in the sun during the day; in some areas it is extremely common.

The diet is composed especially by batrachians, but also by lizards and serpents, and it does not disdain small mammals and birds, if it’s the case.

It is perhaps, among all serpents, one of the most tolerant to the low temperatures and in some zones, like the surroundings of Johannesburg, where the temperatures go down a lot during the austral winter, it may be seen going around when the other ophidians are all idle and burrowed.

The Rinkhaks raises more than the cobras © Giuseppe Mazza

The rinkhals is limited, as diffusion, to the southern part of Africa and precisely to South Africa, where it is present in the province of the Cape and in the eastern belt, without reaching, northward, the province of Limpopo.

It is also absent in good part of western South Africa, but a stripe which follows the coast at the level of the Cape of Good Hope and of Cape Town. It trespasses only for a small portion in Botswana, roughly at the level of the Park of Pilanesberg, and for a few kilometres. In Zimbabwe, it is presenting a small and isolated enclave, on the highland known as Inyanga highlands (highlands of the moon), at the boundary with Mozambique.

It is not a particularly aggressive serpent, but in the reproductive season it may even show gory while defending its privacy. It tries in any way to avoid the contact with the man and to get away, but, should this be not possible, it may pose as dead or may assume an aggressive posture.

When it opts for the first strategy, it shows the back, protruding the tongue in an unseemly manner out from the mouth, but, if it is carelessly touched or picked up, it will not hesitate in hitting. The second option involves the erection of the fore part of the body, more than what done by the true cobras, to hiss ominously, to cast two jets of venom or bite the intruder.

The venom fangs are short but able to easily penetrate the skin and to inoculate the venom and the fact that some think that the African and Asian spitting cobras and the rinkhals do not bite but use their “casting weapon”, is an extremely wrong and dangerous conviction.

The serpent utilizes the jet of venom at distance in order to keep away a predator, exclusively as defence weapon, but the bite is much more dangerous (for avoiding problems in the eyes it is sufficient to wear sun glasses), as we shall see later on, talking about the venom of this species.

In the case of the rinkhals, the danger of bite is accentuated by the fact that this reptile (as, on the other hand, at times, also other serpents, among which the common cobra), if menaced often poses as dead: to pick it up or touch it, in such case, will result in an offensive reaction and often in the inoculation of venom.

The rinkhals seems to be the one with the most specialized fangs among the various “spitting” serpents.

The exit hole is placed forward, in the fang, and, like a nozzle, bound forward and upwards, thing which facilitates the projection of the venom towards the muzzle (or the face) of a potential foe.

Also in the other “spitters” an orifice is directed forward, but then the channel inside the fang continues till when it opens at the apex, or back, immediately before it, so only a part of the venom gets out and is projected ahead.

On the contrary, in the rinkhals there is no apical orifice: the venom duct, inside the fang, cranks ahead, opening in the unique front opening, whilst the lower part of the fang is solid and full. In such way, all the venom is forced to get through the “elbow” and to get out forward, thus resulting in a greater quantity and, over all, in a major pressure, which also results in a greater range.

The only handicap, perhaps, towards other serpents stands in the lesser depth, on equal length of the fangs, of inoculation of the venom, depth which, however, is usually effectual.

When the Hemachatus hemachatus wants to cast the jets of venom against an intruder, it raises always the fore part of the body (unlike the Mozambique spitting cobra, or Naja mossambica, which may also “spit” keeping the head on the ground or, even, while hiding in a hole of the rock or other shelter), then springs forward with head and neck, as if to accompany and reinforce the “launch” and, in the same time, expels noisily air, with a strong hiss.

The two jets of venom, when half a metre far from the fang, disperse usually in an aerosol of droplets. Also the muscles compressing the venom glands (modified salivary glands) are particularly powerful, more than in other spitters.

The venom is very fluid and colourless, when fresh, and is produced in quite large quantity, but becomes yellow when drying up.

The injectable dosage with a bite is of 80-120 mg and the lethal dose for an adult person is of about 60 mg.

The venoms of the spitters have different characteristics from those of many other elapids.

Generally speaking and with the due exceptions, many elapids and most of the typical cobras, have mainly neurotoxic venoms (see text Dendroaspis polylepis for the mechanism of its action), which cause death from paralysis of respiratory muscles, whilst the viperids (also in this case with the due exceptions) have haemotoxic and cytotoxic venoms, causing haemorrhages, thrombosis, necrosis and gangrenes.

The spitting elapids have venoms differing between them, but always with cytotoxic characteristics, because, otherwise, when the venom is casted into the eyes of an aggressor, it would not cause the violent pain and the damage which is, on the contrary, caused by a cytotoxin.

As a result, their bite has often results more similar to those of the vipers than to those of a non-spitting cobra or a mamba or a kraits, that is, even extensive necrosis, haemorrhages and gangrenes, accompanied by excruciating pain.

The rinkhals venom has cytotoxic characteristics but also a neurotoxic action which may cause, alongside necrosis of the affected part, also paralysis, until asphyxia.

Nevertheless, the deaths caused by this animal are uncommon, especially thanks to an adequate therapy.

The venom which may reach the eyes causes immediately a very violent pain and is to be eliminated at once, with copious washings, utilizing water, milk or other non-irritating liquid which might be available (obviously no alcohol) and, in case of emergency, also the urine (usually sterile) has been useful to save some eyes. Otherwise, the damages may be permanent and irreparable, with serious ulcerations of the cornea and other consequences.