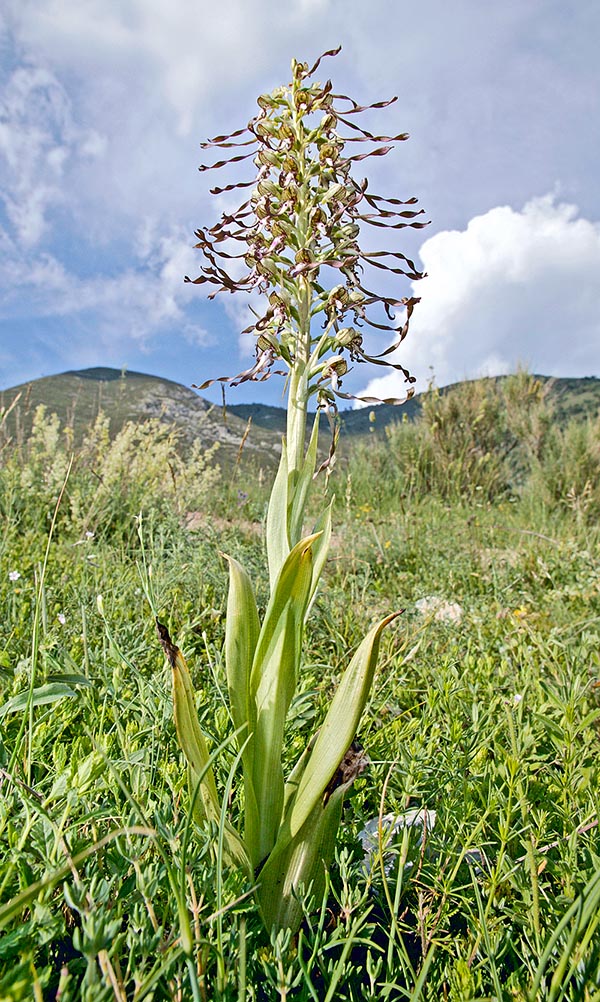 The Himantoglossum hircinum is an orchid that loves calcareous and well drained soils: dry meadows, arid and sunny, sunny and pebbly slopes, but also muminous clearingd of the woods © Giuseppe Mazza

The unusual Himantoglossum hircinum is an unmistakeable orchid, but though being rather widespread, a hiker who has the good fortune to meet it on his way can consider himself lucky.

Inhabitant of dry meadows, arid, and sunny, of sandy and pebbly slopes, loves also stay in the open spaces of the woods. Its choice soil is calcareous, preferably draining.

Expanded from the post-ice age, it has reached various zones of Europe, spreading in many parts of the western Mediterranean zone, excluding eastern Europe. In fact, it is absent in Hungary, Croatia, in Czech Republic and is not present in Slovenia, where lives its related species, Himantoglossum adriaticum of a smaller size and with perfumed flowers.

It is therefore present from Spain to Balkans, up to the north-western parts of Africa. It is rather diffused in the Iberian Peninsula, easily on high grounds, whilst in France is found a little everywhere, excepting Brittany, in the Finistère department, and does not exist even in Corsica.

Curiously, in England, in Kent and in Sussex, it is met in the golf courses, at the sea level. In Germany, it is found scattered in the southern zone, where the climate is less rigid. In Italy it is mainly found in western Liguria and in the regions of the South.

In 1753, in Paris, Linnaeus observed in the Bois de Boulogne an unusual orchid that emanated a goat’s smell.

Consequently, he named it Satyrium hircinum, from the Greek “Satyros”, epithet given in the old times to the orchids, after popular beliefs, bearers of aphrodisiac properties.

Previously a character called “Satyrus” represented a sort of demigod, half-man and half-billygoat.

Also the word “hircinum” comes from “hircus” that in Latin means billygoat and concerns the same issue.

In 1826 the German brilliant botanist Carl Ludwig Sprenger created the genus Himantoglossum dedicated to this group, that includes nine ascertained species. Its meaning is “tongue-shaped belt”, from the Greek “himanthos” = belt and “glossa” = tongue. 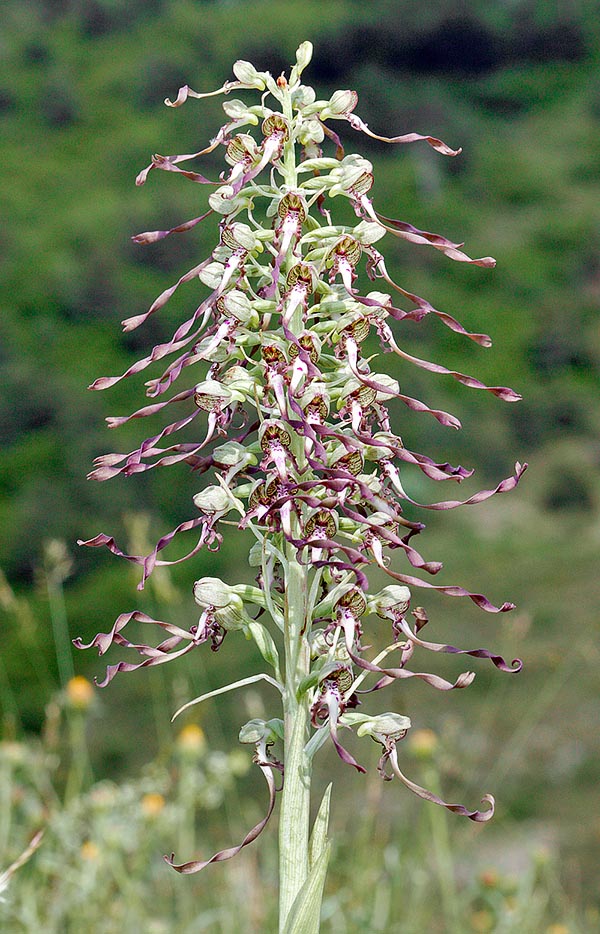 At the base the plant is surrounded by numerous fibres. The stem may reach the 90 cm, even if as an average it does not exceed the 70.

The leaves are numerous and quite showy, elongated and of a nice pale green colour.

The floriferous spike, elegantly extended, may include up to 40 fetid smelling flowers.

Viewed from near we can appreciate the globous green helmet, with bright red rays and internal dotting. The two pollinodes are also green and appear massive.

The labellum, subdivided in three parts, two of which normal, elongates and is twisted on the central lobe up to six and a half cm, in a dramatic way, like a pinkish and brownish violaceous ribbon, hence, rightly, as aforementioned, the name of “himantoglossum”.

All this is done for fascinating the pollinators, essential to the reproduction, especially if we consider that this species stands among those having no nectar.

As a matter of fact, many insects do frequent this attraction masterpiece. The most frequent are hymenopterans of the family Andrenidae, the most active pollinators of the orchids: species like Andrena nigroaenea, Andrena potentillae and Andrena haemorrhoea. But we have also the Apis mellifera, and Colletes similis.  The hood is attractive for the coleopterans Oedemera nobilis and Valgus hemipterus, pollinophagous, and also for scarabaeids and cerambycids.

The plant blooms from May to late July. 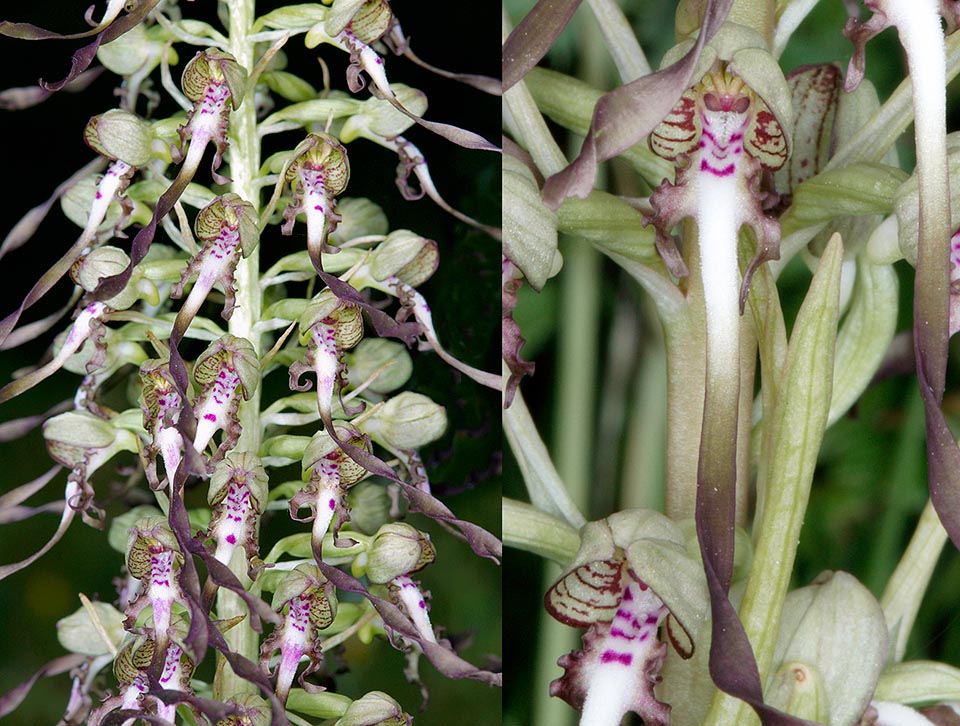 The odd labellum, subdivided in three parts two of which normal, elongates in the central lobe twisting showily. It can reach the 6,5 cm, like a pinkish and brownish-violaceous ribbon. On the right, under a hood, the smiling and mocking little face of the one who has conquered, since the post-ice era, almost all Europe © G. Mazza