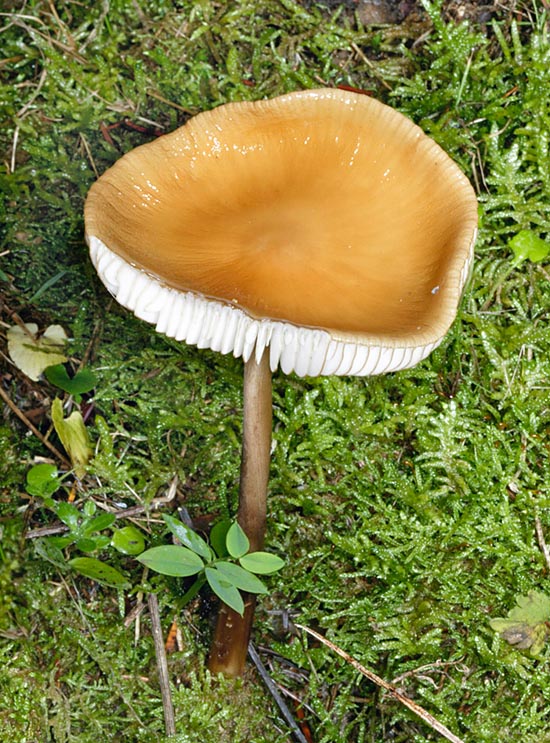 The name of the species comes from the Latin “radicatus” = it has rooted, I have roots.

To the genus Hymenopellis are ascribed species presenting glabrous, greasy cap, with cellular structure of hymenoderm type; rather spaced gills, adnate to sub-decurrent, of waxy consistency; central stem, deeply rooting; whitish flesh. The spores are hyaline at the microscope, white in mass, inamyloid; fusiform or clavate pleurocystidia and cheilocystidia; pleipellis of hymenoderm type.

Hymenium: spaced gills, adnate or rounded, ventricose, wide, interspersed with numerous lamellulae of various length; the colour is white, the thread is entire and just stains brown when ripe.

Stem: 6-15(20) x 0,5-1,5 cm, slender, long, cylindrical, with the enlarged base continuing in the soil under form of root for several centimetres, rigid, fibrous, tough, full, at times twisted; surface finely floccose, longitudinally fibrillar, white at the apex, darkens gradually towards the base, where it has a colouration more or less similar to that of the cap. 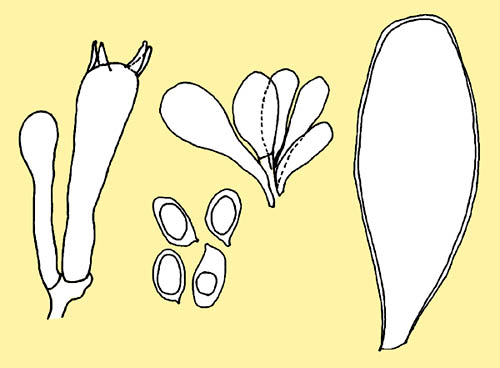 Habitat: it grows in summer and even in late autumn, on rotting stumps or woody residues of broad-leaved trees, especially of beech.

Edibility: has no value.

Remarks : it is a very common species and much diffused, especially in the beech (Fagus sylvatica) woods, it is easy to recognize due to the long taproot stem and the wrinkled and slippery with dry weather, greasy when young. A possible resemblance may exist with Hydropus subalpinus (Höhnel) Singer, rare mushroom, lignicolous too, with smaller dmensions, the cuticle of the cap not wrinkled and the umbo is more acute and the stem is not rooting.

Other possible confusion may occur with Oudemansiella longipes (Quélet) Maire, which, however, has velvety stem and cap.