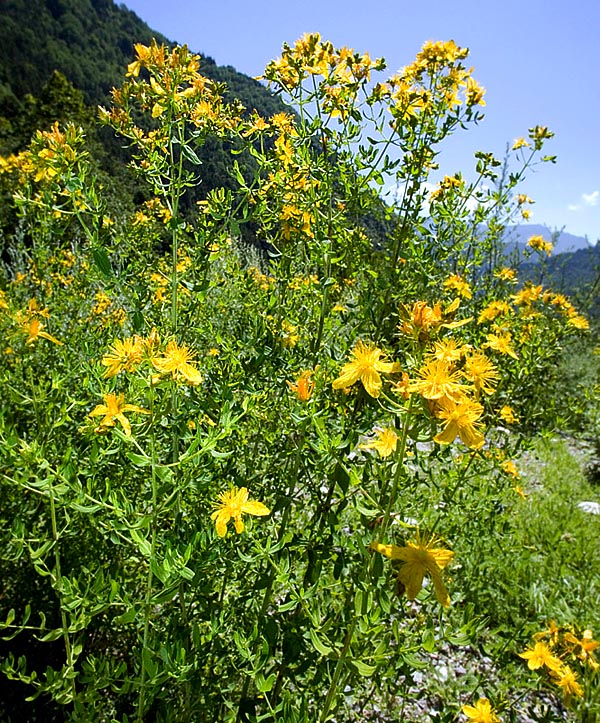 St. John’s wort (Hypericum perforatum L. 1753) has an almost cosmopolitan distribution area. Endemic to the temperate regions of the Old World (Eurasia and North Africa), nowadays we find it, in fact, in North and South America, in South Africa, Australia and in New Zealand.

The interpretation of the genus name is controversial: some want it connected to the heathlands from the Greek “ypo” = under, and “erike” = heath, others, from “upper” = beyond, and “heicon” = image, due to the transparent dotting of the leaves (perforated). For others, from the Greek “yper” = over and “eicos” = resemblance because of the presence on the petals of an element recalling an image; “-ico” comes from the verb “eico” = “I am similar to..”.

The name of the species comes from the Latin “perforo” = to perforate, with reference to the numerous translucent gland making the foliar lamina to look as pitted.

Known also as common St. John’s wort, rosin rose, goatweed, Klamath weed, chase-devil (the tradition dictates that it is to be harvested on June 24th, St. John’s Day, midsummer day, for making small bundles to be hung on the front door as protection against the devils), the Hypericum perforatum is a perennial, glabrous, 20-70 (100) cm tall, herb.

The stems are rather rigid, crossed longitudinally by two pronounced lines, prostrate and lignified at the base.

The leaves are opposite, sessile or nearly so, ovate-lanceolate, dotted with translucent glands and with glands dark on the border.

The flowering, in the northern hemisphere, is concentrated between May and August. The flowers have 5 golden yellow petals twice as long than the sepals, and are arranged in multi-flowered corymbs. A blood-red sap flows if they are pulled off their peduncles.

The fruits are trilocular capsules. It lives in the dry grasslands, the sparse and dry scrubs, the borders of the woods and of the roads, the wastelands, the old walls and the formations with synanthropic vegetation (0-1600 m). It is one of the symbols of the summer solstice. For the phytotherapeutic uses they collect, during the summer, the flowering tops called “Herba Hyperici”. 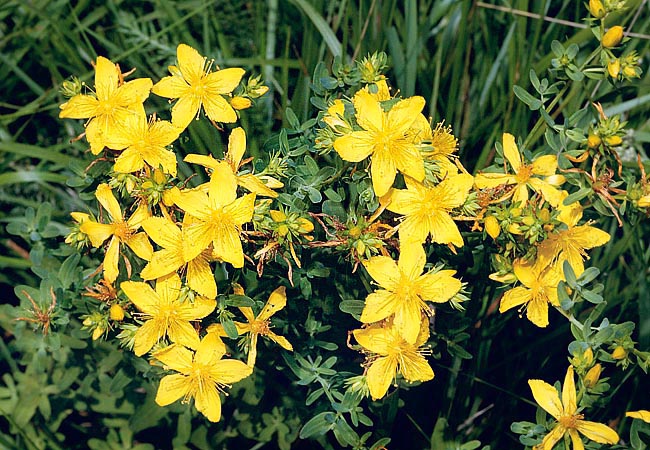 The flowers, arranged in corymbs, have 5 gold yellow petals twice as long as the sepals © Giuseppe Mazza

They contain several typical chemical constituents, such as the naphtodianthrones (hypericin and pseudohypericin), the phloroglucinols (hyperforin and adhyperforin), the flavonoids (hyperoside, quercitrin, isoquercetin and rutin), the catechinic tannins, caffeic and chlorogenic acids, pectin, tannic and mucilaginous substances, etc.

For internal use, the drug has an anti-depressant action and relieves nervous disorders, treats the inflammations of the bronchi, of the urinary system and, generally, of all the abdominal organs.

It is antiseptic, decongestant and balsamic, useful for asthma, the hepatic insufficiencies, the enuresis, and for the difficult digestions. Extracts of Hypericum perforatum are utilized in the Russian clinics for the inflammatory forms of the bronchi and of the genitourinary tracts, due to the balsamic, antibacterial, anti-catarrhal and antiphlogistic activity. For external use it is employed as efficacious vulnerary, anti-inflammatory, and cicatrizant, as it holds an antiviral and antibacterial activity.

A useful infusion for the inflammations and the bronchial and vesical catarrhs is prepared with a spoonful of flowered tops chopped and crushed in a pot of boiling water. Leave to infuse a quarter of an hour, filter, press well the residue, and then sweeten to taste with honey. To be prepared and drunk lukewarm twice-thrice a day far away from the meals. 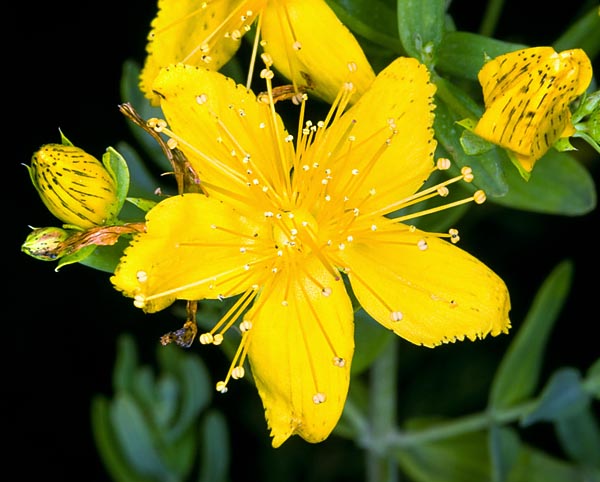 It's a symbol of midsummer, with remarkable medicinal virtues © Giuseppe Mazza

The traditional St. John’s wort oil with the topic-vulnerary and sedative properties, suitable for the “kitchen” burns as well as for the solar erythemas, is done with 300 g of olive oil, 150 ml of ethyl alcohol at 20 °C, and 50 g of flowered tops of St. John’s wort. To macerate in a closed vessel for three days, exposing it to the sun and shaking it every now and then. To filter by pressing the residue with a potato masher, to evaporate the alcohol by putting the liquid in bain-marie for ten minutes. It is utilized by imbuing gauze pads to be applied on wounds, burns or ulcerations. The name of St. John’s wort dates from the beginning of the Christian era, probably due to the red colour of the liquid secreted by the foliar petioles and the dark glands present on the plant which reminds the beheading of the Saint. Amongst the countless popular and druidic medieval legends related to the St. John’s wort, we remind that once the girls did hide a small branch of it under the cushion, thus being sure of dreaming the face of the future bride, whilst those already having a fiancé did hung two small bunches of it above the fireplace; if these, while exsiccating, inclined toward each other, that meant that the marriage would be happy and lasting.

→ To appreciate the biodiversity within the HYPERICACEAE family please click here.

Hypericum perforatum was last modified: May 1st, 2018 by Giuseppe Mazza